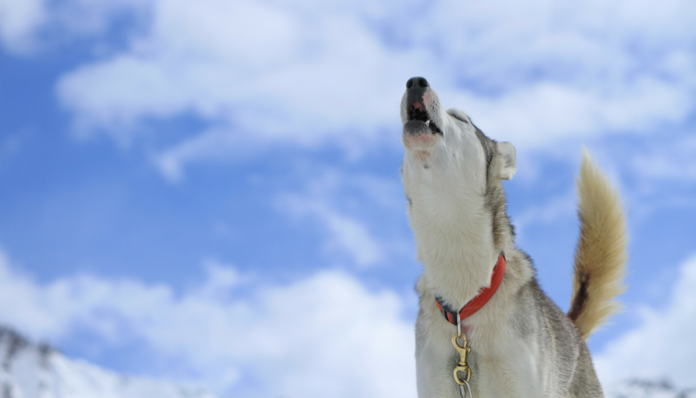 Has your dog ever been involved in howling at night?

Do you ever ponder upon the question of “why do dogs howl at night?”,

“Why do dogs howl to sirens?”,

“Why do dogs howl in their sleep?”,

Be it the internet or your own dog, you must have seen dogs vocalizing to various sounds which makes them look wolf-like.

Howling is one of the ways how dogs try to express themselves to us humans.

Sometimes howls may feel scary but unless it’s a medical reason you shouldn’t be concerned about it.

Read further to know about the reasons why your four-legged buddies are involved in howling.

Dog Howling can be majorly classified into these types:

Some dogs don’t like to live alone and howl when left alone.

The reason for their howling is loneliness for a long period of time.

The moment it sees its owner he will rush to get some appreciation from its owner.

Howling will also be accompanied by other anxiety symptoms such as elimination, pacing, depression, drooling or destruction.

So, if you leave for work and leave your dog alone at home, there are chances he will miss you and start howling.

In the wild, wolves howl to signal their pack about their location.

In the same way, consider that you are the leader of the pack and after you’ve left for work, the mini wolf (your dog) is showing similar traits of calling you back or trying to share his location by howling.

We should not forget that howling is a medium of communication between wolves or dogs.

Your dog may be asking for your attention.

You should not respond to this type of attention-seeking howls as it may become a habit.

Fold your hands and walk away until he doesn’t keep quiet.

This will promote his quiet behavior and make it a rule to not adhere to his demand when he is howling.

You can give your dog rewards when he is quiet.

If he is quiet for five seconds then reward him (treats, chew toy, food, walk outdoors).

In the wild, wolves are observed to howl on a full moon night.

Dogs are considered to be pack animals just as wolves.

Wolves are involved in howling mainly for three reasons:

They leave behind their urine or feces to mark their territory.

This is done to make other animals alert of their presence.

Due to them living in packs wolf howling can mean that other animals or packs are not allowed in an area marked by those wolves.

Calling back some lost member of the pack- Howls can work as telephones for wolves because it can travel a long distance.

This helps the lost member to return back to their pack in their territory.

Individuals without packs do not howl as it would put their existence into danger.

Similar behavior is followed when wolves are denning.

Howling makes their location public which can be risky for them.

Maintaining relationship within pack members- According to National Geographic, modern wolf packs consist of family members rather than having linear hierarchies.

However, they are still led by “alphas”.

Wolves also practice vocalizing with their pack which creates bonding and sense of unity.

Wolves and dogs have different subspecies and breeds.

Although dogs and wolves belong to different species, they resemble a few similar characteristics.

The behavior of wolves related to howling helps us infer quite a few things about dogs as well.

The surroundings play a vital role in the number of sounds that a dog hears in a day.

Sometimes the howls are just a way to respond to some stimulus in the environment.

The excitement can elicit a response from the dogs in forms of howls.

Your dog may be involved in howling, barking or baying.

If one of the dogs from neighborhood starts howling and it can make your dog howl in response.

Why do dogs howl at siren sounds?

Responding to siren sounds are mostly seen in older dogs than in puppies.

They mistake the siren sounds as howls and start howling as if one of their pack members is calling out.

Have you seen dogs howl when you play a pop song?

Pooches are great opera singers and will entertain you with their howling.

These are the high-pitched sounds which stimulate them to respond back by howling.

During the daytime, the sounds of vehicles, machines, and other things act as disturbance for the dog.

It is nowhere close to being felt like the wilderness.

Because of this, you must have noticed that dogs howl after they sense that the neighborhood is quiet and then start howling after 11 at night.

Dogs can howl without any reason too.

Sometimes you may not know what triggered howling from your dog.

Your dog may try to vocalize to talk to you.

If you have two dogs at home and they start howling together, they’re probably trying to sing their own dog song.

That may even be a way of calling you if you’re busy with some other work.

It will also guard your house by howling which will keep trespassers away.

Dogs will howl to make you alert about something that they have found.

Howling may also come out of the sheer happiness of the dog.

It may be their way of addressing a celebration!

Physical or Emotional distress may trigger a howling response.

A dog may also howl due to some underlying medical reasons which are causing him pain.

Sleep deficiency, hip or Elbow dysplasia, pain in some body part, itchy skin or dog eye discharges may give rise to the discomfort of the dog.

Sometimes you must have noticed your dog making sounds when he is sleeping.

Dog dreams can be an important determinant in your dog howling in sleep.

Some old dogs suffer from Dementia which causes disorientation and confusion.

They may have abnormal sleep-wake cycles.

They may feel lost or confused and start crying or howling.

There are some Breeds which have more howling behavior than others.

The function of these dogs and origin determines how the habit of howling was picked up by them.

They are inclined towards the activity of howling.

Huskies look quite similar to wolves.

If a group of Huskies was to gather together, you would hear a melodious canine song as a result of their union.

Hound dogs are diverse in their nature.

Some are famous for making a peculiar dog baying sound.

Some have the common characteristic of being used for hunting activities.

They are known to have a strong sense of smell.

Hound dogs are the ones which are known to howl.

However, not all hounds have similar behavior patterns.

Labradors are lesser-known to have howling behavior.

Although less frequent, it may be involved in dog howling at night sometimes.

If you own a Lab, you must have seen them howling at a siren or while watching T.V.

Now you know why your dog is possibly showing howling behavior.

Sometimes it may be just fun to start howling with your pooch.

Tell us your funny or dog howling stories in the comments below!

Happy petting to you!  Awoooo…

20 Fluffy Dog Breeds That Will Melt Your Heart!

All About Dog Tails