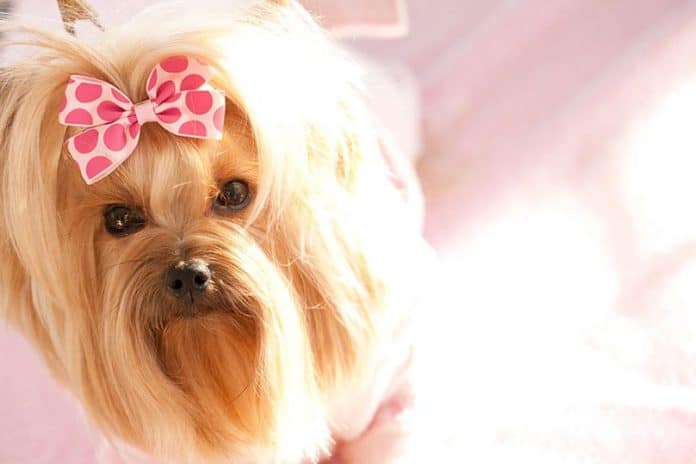 Do you own a female dog? Is your female dog in heat? Are you worried about taking care of her?
Worry no more, we are here to answer all your questions about female dogs in heat.

What is Dog Heat?

To start knowing all about female dogs in heat you should first know what is meant by “dogs in heat”? Dogs in heat go through a phase where both male and female dogs reach their age of sexual maturity and are fully capable to start breeding.

Dogs, specifically female dogs, go through a heat cycle as a part and process of their developing reproductive system. Male and female dogs in heat are totally different from each other. Dogs in heat are all about hormonal and behavioral changes in them.

How long are Dogs in Heat?

The heat cycle for female dogs comes twice in a period of one year. Male dogs do not go into heat and they are capable of conceiving year-round. Some dogs come into the heat cycle every 5 to 9 months.

Some female dogs can face abnormal time gap in between their heat cycles but the gap is usually nothing to be worried about. Some females also go into heat only once per year.

When Do Female Dogs Go in Heat?

However, male pups can start siring puppies at a very young age of 6-7months. Females should be allowed to breed only after the second heat cycle.

As a dog owner if your female pooch doesn’t start her heat cycle on time it is nothing to be worried about. Some dogs can start the heat cycle at two years of age.

At What Age does a Female Dog Stop Coming in Heat?

A dog does not stop coming in heat. Female dogs can go into heat throughout their lives and can get pregnant at any given age. Their aging can affect the process and the time between their Estrus cycles can vary.

What are Dog Periods?

If you own a female pooch you must have faced some red stains in your house or on your furniture. Female dogs bleeding or having a period is a common phenomenon and YES! Dog periods do exist.

Dog periods are partly similar to the periods in human females as the pooch also ovulates and thus, the bleeding.

A female dog’s period will last up to 3 to 4 weeks as they go through their first stage of heat cycle.

What Are the Stages of a Female Dog’s Heat Cycle?

There are four stages a female dog in heat goes through.

The Proestrus stage is the first stage which lasts about 9 days and during these 9 days the female dog’s body starts experiencing changes like a swollen vulva and bloody discharge.

Also, known as the Oestrus Stage, this is the second stage which also lasts for 9 days and at this stage eggs are released from the female’s ovaries. This stage is considered to be the stage where a female is ready for mating.

This stage marks the inactivity of sexual hormones and self-repairing stage for female dogs. This stage lasts up to 4-5 months or till the female dog is back in heat and ready to start from stage one.

What are the Signs of Female Dogs in Heat?

There are many signs and symptoms of female dogs in heat; you can tell if your female dog is in heat if:

The first stage of female dogs in heat is the Proestrus stage. At this stage, the female dog has reached sexual maturity and can get pregnant. Dogs cannot get pregnant at the very first time of their estrus cycle but for the following one’s they can.

Even then dogs should not be allowed to mate and get pregnant as she has just started her heat cycle and isn’t ready for mating. Female dogs can get aggressive towards male dogs that approach them at the first stage of the heat cycle.

Do Female Dogs Come in Heat More Often in the Spring Season?

This is a question many new dog owners and even dog lovers ask a lot. No, female dogs in heat are not subject to any seasonal changes. Cats in heat can be affected by the seasonal changes but not dogs.

Female dogs do not require daylight or a particular time of the day or season to come into heat. Female dogs in heat function biologically and according to their inner clock. The spring season does not affect female dogs in heat and their heat cycles to occur often or occur at all.

How long are Female Dogs in Heat?

The heat cycle in female dogs lasts for about 21 days. For younger bitches the time can be longer and go beyond 21 days. Any period that is longer or shorter than the normal time period is considered abnormal or needs a veterinarian’s intervention.

In many dogs the heat cycle starts or ends suddenly after a few days. If you notice such a thing in your female pup, don’t worry because the heat cycle will likely resume again in 1 to 2 weeks duration and then continue for the next 21 days.

How long do female dogs in heat bleed?

After the end of the heat cycle when female dogs are no longer in heat the bloody discharge will stop. It also changes color and becomes light red or pinkish.

What is Abnormal Heat Cycle in Female Dogs?

The reason for abnormal heat cycles can be serious underlying health issues in female dogs. The first of the lot is Absent Heat, in absent heat a female dog will never go into heat. Diseases related to the reproductive system can cause absent heat.

Then there is Silent Heat. If your dog has a silent heat she will show no signs and symptoms of going into heat but will still have an ongoing heat cycle.

Female dogs can also have Split Heat which means they will stop the heat cycle midway or before going to the second stage.

Prolonged Heat is the abnormal heat cycle when dogs go ahead and stay in heat for more than 21 days.

How to Stop a Female Dog from Going into Heat?

To stop a dog from going into heat is actually not a good option. If you are not planning to use your dog for breeding, then you can choose to spay your dog. Spayed female dogs will stop going into heat.

Spaying is highly recommended by vets to stop the process of female dogs in heat. If you own a male dog you can opt for neutering as well. Read all about Neutering and spaying dogs.

What are the Benefits of Spaying Female Dogs?

The foremost benefit of spaying a dog is it will stop dogs from going into heat. This way, you can opt out of unwanted dog pregnancies, protecting female dogs from male visitors and more.

The benefits of spaying dogs are not limited to the dogs and their owners. By doing so, you can also do your bit to reduce the pet over-population.

Female dogs in heat that are already spayed can be due to the reproductive organs not being removed entirely. The most possible reason for this is a low-quality spaying surgery.

In such a case, the female dog may not get pregnant but will show all heat signs and symptoms. Also, you should not ignore the possibility of you misinterpreting other similar signs to be signs of heat.

Is there any medication to stop female dogs from going in heat?

Yes, there are medicines to stop the heat cycles in dogs. Ovaban is the medicine that helps control the heat cycle in female pooches. It’s a synthetic substitute for progesterone, the hormone that is the receptor of the heat hormones.

It is injected in the early phases of the heat. It then makes other hormones more active and thus stops the heat cycle. This method should not be used without consulting a veterinarian.

Is there any Medication to Start the Heat Cycle?

Sure there are ways to help boost or induce the heat in female dogs but they are not recommended and must be avoided. These medications are better used to deal with fertility issues in dogs.

If your female canine is healthy you should not opt for speeding up the natural process.

Is It Okay To Walk Female Dogs In Heat?

Yes, it is absolutely okay to walk dogs in heat. Actually, it is a vet recommended activity. However, you need to be more careful and take many precautions when walking a female dog in heat.

You should always walk a female dog on leash, when in heat. You can also rub menthol on her tail tip to avoid the scent from attracting male dogs.

Do Female Dogs In Heat Get Tired Of The Heat?

Yes, dogs can get tired because of the heat. Female dogs in heat can get exhausted and feel tired by the heat. They have very low and decreased physical activity, interest and appetite.

This can cause female dogs in heat to be tired and restless.

How to Calm Female Dogs in Heat?

Female dogs in heat face a tough time both physically and mentally. During their heat cycle they also tend to become aggressive or hyper-active.

To stop the same and calm a dog in heat you can try spending more time with the pooch. More quality time and attention will eventually make them feel loved and they will calm down.

You can also try playing with her, run her or walk her or just pet her as much as you can. Attention and patience play a huge role in calming dogs in heat or otherwise as well.

Hope we answered all your questions about female dogs in heat.

If you have more questions you are welcome to ask us the same in our comments section below.

Also, do let us know your views about female dogs in heat.

Cockapoo – The Paris of the Pup World