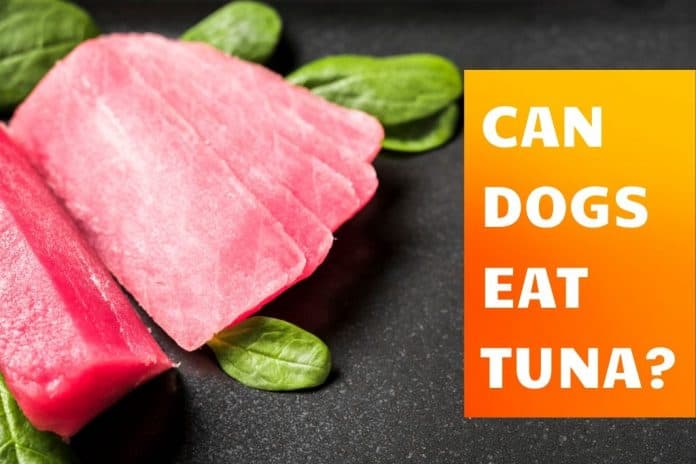 You have probably seen some dog foods that include fish in it and have wondered if Can Dogs Eat Tuna? Tuna is a fish found in saltwater so you have to think twice before feeding something like that to your dog as unknown foods can harm their health.

It is common that you want your dog to try different food simply because your dog might enjoy it or sometimes they don’t like some foods we choose for them.

So, we keep trying different foods so that they could eat something they like and enjoy at the same time.

In this article, we will tell you if you can feed tuna to your dog and if yes then how can you feed them, their benefits, risks and we will try to answer all of your questions related to it.

Is Tuna Good For Dogs?

Seawater is filled with different species of fishes and all of them have a different life span in that tuna fish is said to have the longest life span with 50 years.

Heavy metals and chemicals enter seawater and pollute them so as long as tuna fish is in the water they will consume more metals in their system.

Consuming too much mercury will lead to mercury poisoning which is very harmful to dogs.

If you feed tuna to them in a little amount that is okay. But, make sure it does not gets included in their diet or becomes a habit.

Though, tuna is safe for dogs to eat as it contains proteins and does not upset your dog’s stomach.

Some dogs have a sensitive stomach and they can’t digest poultry protein well. So, providing those tuna fishes which are a good source of protein will help them a lot. You just have to be careful and serve them into small amounts.

So, the initial question

“Is Tuna Good for Dogs?” And the answer is yes, you can with some precautions.

Canned tuna is mixed with either water or in oil but again this might confuse you and make you wonder,

We will answer all your questions starting below.

Serve your dog a tuna can with water, not oil. Also, there are cans that have seasonings and spices but make sure they completely devoid of that before feeding your pooch.

Canned tuna is good for dogs if you are not that much into cooking it for them.

While you are feeding your pooch canned tuna make sure:

After following the instructions get your little friend ready for a healthy snack which is rich in protein.

Raw tuna fish is filled with a lot of mercury which is very harmful not only for dogs but humans too.

The mercury levels in tuna fish are really high as they are larger and live long they have a high chance that mercury enters their tissues at a high level.

Dogs are smaller than humans so they have low tolerance in everything and this level of mercury can harm them pretty badly.

Don’t worry if your dog eats tuna without your knowledge as some amount of mercury will not cause mercury poisoning.

Tuna is not toxic to dogs but at the same time make sure they eat it in small portions. But you can choose different fishes for them which have low mercury levels, to know which fish can be fed to your dog read our in-depth article Seafood dogs can eat

Benefits of Tuna for Dogs

Tuna is very rich in protein which benefits your dog in many ways especially when your dog has a sensitive stomach.

This fish has selenoneine which is a unique type of selenium that has the power to bind mercury and protect tuna’s cells from mercury damage though the research is still in an on-going process to know exactly this selenium works this is a very interesting fact.

Actually, tuna contains a lot of nutritional benefits such as choline, magnesium, potassium, phosphorus, vitamin B, vitamin D, and selenium.

Tuna has high minerals and vitamins content which benefits dog but for better measures feed your dog canned tuna.

Is Tuna Bad for Dogs?

Some of the commercial dog foods include tuna as an ingredient in them but the level of mercury in them does not harm your pooch.

But the level of mercury in canned, cooked, or raw tuna fish can be worrying as they can lead to mercury poisoning.

But according to research, cases of mercury poisoning from tuna have not been reported yet so don’t fret much.

Dogs do not react well to unknown foods so this can cause them allergy from any food they have for the first time so sometimes dogs won’t like eating tuna in the first place.

Rush your dog to vet if you see these symptoms of mercury poisoning in your dogs:

Keep your vet on speed-dial if your pooch is eating tuna for the first time.

But if you feed tuna in a small portion your dog should be fine.

“Can Dogs Eat Tuna Fish” yes they can now, on to new question how can you feed them.

Here are the ways you can feed tuna to your dog:

But if you are feeding tuna for the first time to your dog make sure you lessen the proportion of tuna your dog will be eating.

Try to give canned tuna to your dog and not the raw tuna.

Quantity of Tuna to Be Served To Your Dog

You can serve tuna to your dog on the basis of:

This will give you an idea of how much tuna you can feed your dog on the basis of their weight.

How Much Tuna Is Safe For Dogs?

As we have learned, tuna containing high mercury levels compared to other fishes so it should be fed on rare occasions and in very minimal amounts.

Tuna already contains high amounts of sodium and canned tuna increases the level of sodium in tuna and if consumed on a high level by dogs it can be deadly so it is another reason you should feed tuna rarely.

Keep a track of their reactions when you are feeding tuna for the first time and be very careful and observing towards them.

Some may show problematic signs because of high protein level tuna consists of or some dogs may be allergic to tuna so keep a good track on them.

Give tuna to them as only treat and rarely. Do not include tuna in their regular diet.

Feed only 1-2 pieces in starting to see how they react and that is it not more than that.

If you be careful your dog will be just fine. If not, visit this link to choose different fish to feed your dog which has low mercury levels.

Can Dogs Have Tuna Juice?

Tuna juice does not have any threat to your dog and is not considered bad for dogs.

Too much tuna juice can lead to diarrhea so limit the amount of juice you provide to your dog.

Immediately stop giving them tuna juice if they start vomiting or show any signs of unease.

Rush your dog to vet if the signs get worse.

Rush your pooch to vet if you see this signs of discomfort:

As long as you do not find these symptoms your dog will be fine.

In this article, we discussed, “Is Tuna okay for Dogs” and how you can feed tuna to your dogs and questions related to it.

We hope you found all benefits and risks related to tuna while feeding your dog.

Tuna can be beneficial for your dog’s health as long as you are careful and take precautions while feeding your pooch.

Give tuna in a small amount and occasionally as anything more can harm your dog badly.

This was all about feeding tuna to your pooch!

We hope you find this article informative and useful.

We would love to know your thoughts in the comment section!

How Dog Nutrition Affects Every Part of their Health!