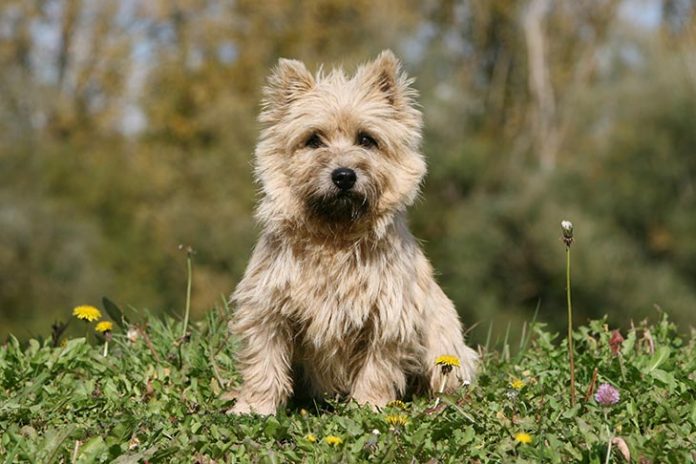 Whenever there was a need, humans tried their best to fulfill it. The need for a fearless and intelligent dog was likely fulfilled by the Cairn Terrier. It is believed that the invention of the dog lies somewhere 200 years ago in the Isle of Skye, Scotland.

But is this breed capable of adapting itself to a new era?

The height among them is around 8 – 10 inches and their weight varies from 13 to 17 Pounds.

Their affection towards any person is infinite. They will always back you up.

Might not be a good option but a promise of several walks in a day can make it happen.

They are pretty much okay with Cold climatic conditions.

They find it hard to adjust in Hot weather.

They bark a lot. Reason can be attention-seeking, Hunger, Separation.

They are okay sitting with a cat on the couch.

The same goes for the dog. They are averagely good with them.

The exercise routine should be maintained on a regular basis.

Professional grooming is not required. Brushing his coat and cleaning his ears should be enough.

They are known for their playfulness. If you are not really active, then it might be challenging for you.

Training them is an easy Cup of Tea.

They excel in Intelligence and can gain commands easily.

They tend to play-bite and lick a lot that does not mean they are aggressive.

They cost approximately around $700 to $1000 varying on the basis of the quality of the breeder.

It is very hard to find obedience and social appeal at the same time. But, imagine a dog having both of these characteristics?

The Cairn terrier is un-doubted the most socialized dog. It is capable of learning things very quick. He also gets hurt too quick as he is extremely sentimental. So the next time you say them a no for the walk they might not talk to you.

The Cairn terrier puppy is as intelligent as a human being and aggressive at the same time. Since it belongs to the terriers, it might be difficult for anyone to handle him. A firm and rigid training can be very effective to ensure he does not follow back his old traits.

Terriers were known to be fearless. So is this breed. He can safeguard you from any animal. If you have a toddling member, they are the most responsible creature to depend upon

Where Cairn Terrier Dogs Came From?

Captain Martin Macleod is known to be the creator of this breed. It is estimated that around 200 years ago the dog made its first step to the world in the Isle of Skye, Scotland. They were formerly known as the Scotch terrier but then in the year 1873 they were diverged into two groups namely the die Dinmont terriers and the Skye Terriers.

The year 1912 marked the recognition of the Cairn terrier. This breed was named after the Scottish burial’s stone which the hiding place for vermins.

Mrs. Henry F Price and Mr. Byron Rodger were the first to own a Cairn terrier from US and England respectively in the year 1913. The year 1917 experienced a ban on interbreeding between the Cairn and West Highland White or any other such dogs. In the same year AKC recognized American Cairn terrier club.

The size of this breed is not much but that’s said, it is no less than a full size dog. It is capable of doing activities just like any other dog can. Precisely, better and quick.

The size through shoulder in male does not go more than 10 inches and having a weight of around 14 pounds.

The size of a Female Cairn terrier Dogs is half inches lesser than that of the Male. Weight among females is around 13 pounds.

The Cairn terrier puppy is efficient enough to learn new thing quick and easy. There are very few things which they can’t adapt to.

Being a terrier breed it has the genes of a hunter and a disobedient creature. His behavior can be controlled with commands. Their training should be motivational and fascinating.

Cairn terrier colors are unique and beautiful too. They get colors like red, sand and grey. They also get Black coated fur. The Cairn terrier black has a huge demand as well.

Grooming this dog is not much of a task, brushing the dog’s coat is all you need to do. Giving him a shower with the interval of 2 months will help him stay fresh and clean.

His coat should be trimmed at least twice a year with a clipper. Shaping will not help the pup in either ways but will incur an expense.

There is lot more than just brushing his furs. It is very essential for any dog to stay clean. Their teeth should be brushed regularly so that their breath is not smelling bad.

They love to play a lot, so it is equally important to trim their nails so that they do not scratch anyone and injures them. One should be careful while trimming the toenails. Since it contains blood vessels, trimming them too deep might cause blood ooze which can be hard to stop.

Coming to the ears, they should be cleaned properly for eradication of any infections. Checking the wax formed in the ear of the pup is very important.

Grooming them can be tricky but once they are tidy, they are the happiest. This will also help you detect any problem that the pup is keeping.

The Cairn terrier are more prone to dental disease than any other breed. The tartar buildup in their teeth can be one painful experience for them. The tartar may reach his body and affect their heart, liver etc. It will shorten the life span of the pup.

Knee Problem- Problems like the slip disk is very commonly found in this little pup. Symptoms like running with skipping legs or sudden slow down should not be avoided and should be addressed immediately.

Hip dysplasia– The improper formation of hip joints leads to arthritis. This is found is most of the dog breeds.

Hip Necrosis- This disease caused by the reduced supply of blood. The deterioration of the hip bone which is also known as the Legg-calves-perth.

No such diseases found in them.

This breed is very prone to infections. It is advised to give Parvo and Rabies antiviruses

Glaucoma- This disease is very common among the Cairn terrier Puppy. They might lose their vision if it has affected deeply. Symptoms like watery eyes and blurring of the cornea should be taken care immediately.

Cataract- This is found in the older terriers. This can be cured with the change of lens, But the pup might experience a blurry vision.

No Neurological issues found in them as such

They have also been seen with the disease called the Hepatitis. The only solution to this is a biopsy.

Diabetes– This is yet another most commonly found disease among the Cairn terrier puppies. The Diabetes level should be kept in a check.

Since they are active throughout the day, they need to eat a better meal so as to make sure the energy level does not shed down.

1 to ½ cup of dry organic food should be given to the pup. Additional food may require depending upon their eating habits. Some pups might be hungry more than you thought they would.

They should be given quality over quantity foods so that they feel heavy by eating a small amount of portion.

Not all dogs need the same amount of food. The consumption level of each dog is different from that of others. An excessive amount of food can make your pup obese and full of sickness.

Excessive food may make them inactive giving them a feel of lethargy which should not be a good sign for a Cairn terrier.

Just like any other breed of dog, this puppy needs some exercise to stay fit and cut down the risk of any unwanted illness.

It should be made a practice among the Cairns that of the exercise for at least 20 – 30 minutes every day. The need for longer duration of exercise is not required because it is already active a lot

These cute monsters can make things challenging for you but, they are just puppies. They do not intend to hurt you or your emotions. All they seek is some fun during the tasks.

Vaccination can be a difficult area to cover. You can read our Guide To Dog Vaccination to have a better idea of it.

Cost for keeping these pups well include their food, grooming, and vaccination. These are the three main diaspora for a healthy dog.

One can expect a cost of around $400 every year on their maintenance.

The price goes towards the higher side because of its habits. It needs good quality food to maintain its smooth coat and active mind all the time.

Being very playful they would initially need toys as taking them out during the first few days should be avoided.

Grooming will not incur a lot of costs because they don’t need a clipping frequently. Rather, once in every two months is adequate. The cost of a professional groomer can be saved to some extent.

They’re just the ideal friend of the kids at a household, keep a close watch on the toddlers fast asleep, and provide them with utmost warmth and comfort. They would even enjoy the same cartoon showsas the children.

Cairn terrier is to some extent good with dogs. They can eat together and be together with no fuss, unless the other pup is trying to be violent.

They do not bother cats. They would proudly walk by them when they come to sit beside them.

The Cairn terrier breed is a very friendly among its members and equally respectful. They might seek for some entertainment, but don’t be angry on him. They love to do that. That is how they can show how affectionate they actually are.

Being mountain dog and a breed of terrier it is very protective in nature. It will give its all heart to execute a responsibility.

Being equally respectful to other pet, this pet has proved that this world is a better place to live. Adjustment and sacrifices are a part of life.

They come in some amazing coat colors. Their color makes them stand out as an exception.

These dogs cannot be well behaved at the beginning but training them is a lot easier with just some interesting and fascinating topics.

The Cairn terrier cost is a bit high. But then again it is dog who would always uplift your mood.

It does not take much to keep them happy as cairn terrier shedding is very less. Grooming only includes brushing them. Clipping their furs and cleaning their ears is all you need to do.

Something Fun About The Cairn Terriers!

In the year 1939, a cairn terrier acted in a movie called the Wizard Of The Oz.

You are all caught up with Cairn terrier. Did this dog please you enough to make into your bucket-list?

Do you have a story about Cairn terrier? Let us know what other breeds should we be writing about. Feel free to use the comment section below to express your opinion on this breed of dog.

Rampur Greyhound – Robinhood Of The North

A Guide to Apartment Dogs

ABOUT US
We look forward to support every dog parent with some useful and quality content to be better able to understand and take care of the unspoken animal’s problems.
Contact us: contactdogisworld@gmail.com
FOLLOW US

© Dog Is World by PortraitFlip