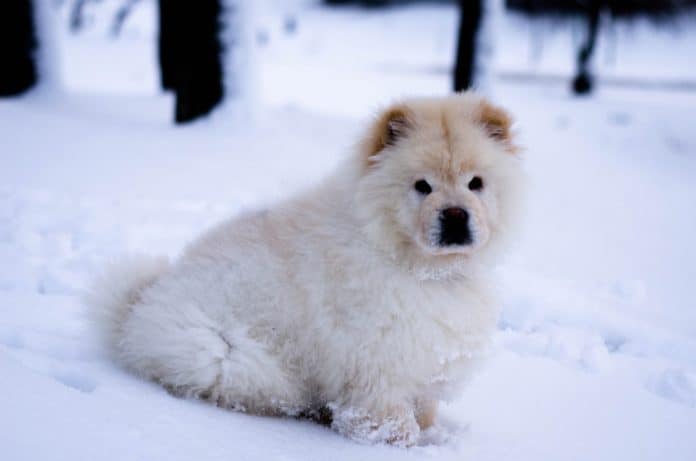 The Chow Chow is a breed originally from the northern part of China.

There are two coat varieties of the breed, Smooth-coated and rough-coated.

It is a distinctive looking dog with a catlike behavior so they are a bit aloof in nature but fiercely loyal.

They have a potential for mouthiness and a tendency to cuddle also they are bright and stern minded and have a distinctive scowling facial expression with a blue-black tongue which makes them unique.

These dogs are really high priced in terms of money.

These are medium-large sized dogs and can grow up to a height of 22 inches.

A Chow Chow is medium with a muscular body framework.

The chow breed possesses a catlike personality the aspects of which are more reserved, independent, loyal, quiet, and calm and are also dominant in nature although most remains are wary of strangers.

The breed chooses an alpha and he is completely loyal towards him.

This particular breed will do okay in an apartment because they are inactive indoors and do not require a great deal of exercise.

This breed of dog should be indoor because they are more of a luxurious breed.

Their wooly undercoat provides ample insulation from the cold.

A high-fat chow dog food will also help him deal with low temperatures because fat is an easily metabolized source of energy.

The chow’s tolerance towards heat is really low and it is also a heat-sensitive breed.

They are highly protective of their family and home.

The reasons behind him barking could be protection, alarm, attention-seeking, and compulsive barking.

The chow dog breed is not the most cat-friendly dogs because their behavior itself is catlike which makes it difficult to be around other cats.

The breed is not very dog-friendly and is aggressive towards other dogs.

It is important for a chow puppy to have early socialization with other dogs in their puppyhood.

The breed is an alert active dog with a moderate amount of exercise needs because this breed highly tends to put on weight.

It is a breed that loves a good walk but at the same time, they do not want to exert themselves in the heat.

The chow grooming needs are high and they require at least two sessions of grooming in a week.

This breed also needs regular maintenance of nails, teeth, and ears because they are prone to infections at times.

They are not the most playful dog breed though sometimes they do indulge themselves in some sort of playful activities.

One thing we should remember is that all dogs are individual so they might as well like playing the game of fetch.

Training them might be a challenge because chow chows are fairly intelligent but they have both an independent and a stubborn streak.

They do best with training to clarify their position in the family.

Chow chows have a potential for mouthiness and they have a strong tendency to the nib, chew, and play-bite or herd people.

This mouthy breed seems to really enjoy the game of fetch.

When they are bored they find their own way to entertain themselves and perform repulsive behavior like chewing, barking.

The chow chows are considered to be among the most expensive breeds in the world.

The chow is a medium-large, muscular, and powerful dog of Chinese origin.

The facial wrinkles and their body flanked by long hair is the uniqueness of chow.

This breed of dog has a peripheral vision because of his droopy eyes and their straight back legs give them a short, stilted gait.

The tail is curled high over their back.

The breed is one of the dog breeds that have the lowest degree of obedience intelligence.

They are much of a healthy dog with fewer health issues and their daily diet includes the best quality dog food.

It is a breed suited for multi-tasking because its build reflects its ability to hunt, herd, pull, and protect.

Where Chow chows Came From?

Chow chows are the Ancient Chinese breed of dogs and they reached the Western world in the late 1800s and began a rise to popularity.

Some believe the breed is the ancestor of the Pomeranian, Norwegian Elkhound, Samoyed and Keeshond because of the unique blue-black tongue.

The very name chow may come from the Chinese “chou” for edible and they are considered to be indigenous in the area known as Canton in southern China.

Chow size is medium and is hence comfortable with medium-sized apartment living.

The average height of adult specimens is 17 to 20 inches at the withers but in every case consideration of overall proportions and type should take precedence oversize.

Chows do best with training to clarify their position in the family or they can become dominant.

Chow training should begin at an early age with basic training and later you can advance to complex training, once h/she grows up.

Chow grooming varies with the coat-type.

This breed type is either rough-coated which requires daily grooming to keep them free of tangles or smooth coated which can be groomed brief once or twice a week.

Cancer is a very common disease among chow while other chow health problems include:

Dysplasia is an inherent disease that affects hips and elbows and causes the joints to develop improperly and results in arthritis.

Patellar luxation is a disease that your pet suffers from when the Kneecap (patella) may slip out of place.

Pemphigus foliaceus is a superficial skin disease that is more common in Rough Coated Chows.

This breed suffers from a skin allergy called Atopy that causes itchy skin due to dust, pollen, etc

Glaucoma is an eye condition that affects Chow Chows.

It is an extremely painful disease that rapidly leads to blindness if left untreated.

Entropion is a condition in which the eyelid rolls inward, causing the eyelashes to rub against the cornea.

A cataract is the most common cause of blindness in older chows.

Wobbler Syndrome is a genetically linked neurological condition that results in narrowing of the vertebrae in the neck that pinches the spinal cord and associated nerves.

Obesity can be a serious health problem in rough coated chow chows.

Gastric dilatation and volvulus, also known as GDV or bloat, usually occurs in dogs with deep, narrow chests and this means your Chow is more at risk than other breeds.

Hypothyroidism chows are prone to a common condition in which the body does not make enough thyroid hormones.

This breed is to be fed with high-quality food at regular intervals and also the growth of chow puppy includes many aspects such as right food, playing, and right quantity food.

The diet of chow includes rice which is easy to digest and helps in maintaining healthy skin and coat.

Eggs and cottage cheese are good sources of protein.

The amount of food your adult chow needs depends on his size, build, age, activity level, and metabolism.

Dogs are to be fed nutritional food which helps in healthy growth because keeping them away from required nutrition may hinder their growth.

Chows are susceptible to bacterial and viral infections—the same ones that all dogs can get—such as parvo, rabies, and distemper.

Many of these infections are preventable through vaccination. Read our Guide To Dog Vaccination to know more about it.

Chow shedding is above average.

It is a natural process of the hair growth cycle.

The breed is a kind of dog who should be kept inside the house instead of sticking them out in the kennel.

Crate training is highly recommended to keep your chow from chewing things while you are away.

Chow has a tendency to be lazy and grouchy if not exercised at all.

The monthly expense is high because this breed is supposed to be fed with the best quality food.

This is a high maintenance dog breed and also requires an ample amount of grooming.

Chow chows are not of amiable nature unlike other human-friendly dogs such as labrador, golden retriever, etc.

When they are raised with children they can do well with them but at the same time, they are not rough and tumble dogs that will tolerate abuse from a kid.

Anyone who spends the most time with the dog can expect some kind of affection, they need plenty of early socialization including exposure to children.

Chows are not dog-friendly.

If you want more dogs in your family or you’d like to join dog meetups, the breed is not the best choice.

They are independent dogs who are also extremely dominant.

He will live harmoniously with a dog of a similar size, but of the opposite sex.

As we know the personality of the breed is very similar to cats which in turn makes them dominant towards other cats around but it also depends on how you raise your pet but sometimes the results are different.

The behavior of chow also depends on how they have been raised in a house.

Chows are the cleanest of dogs, they have little doggy odor and are known to be as fastidious as cats.

The breed was raised in China primarily on grains and have a tendency to be overweight because of rich food.

The breed is known to be more likely to suffer from bloat and twisting of the gut (“gastric dilatation‐volvulus”).

It is a breed that requires more grooming as compared to other dog breeds.

The breed is an unusual dog breed and it is one of a kind.

This breed has pink tongues when they are born, but by the time they are eight to ten weeks old, their tongue changes permanently to a blue-black color.

In the 1820s Chows were exhibited at the London Zoo as the “Wild Dogs of China”.

Unfortunately, the dogs were also used as food and their coats as clothing.

Something Fun About Chow Chow!

Let me tell you a fun fact about The Chow.

So in the past, there was a myth about this breed that the blue-black color of the tongue of chow is because they licked the sky when God was creating the earth.

Dogs In Heat – Behavior, Estrus Cycle, Precautions, Tips and a...