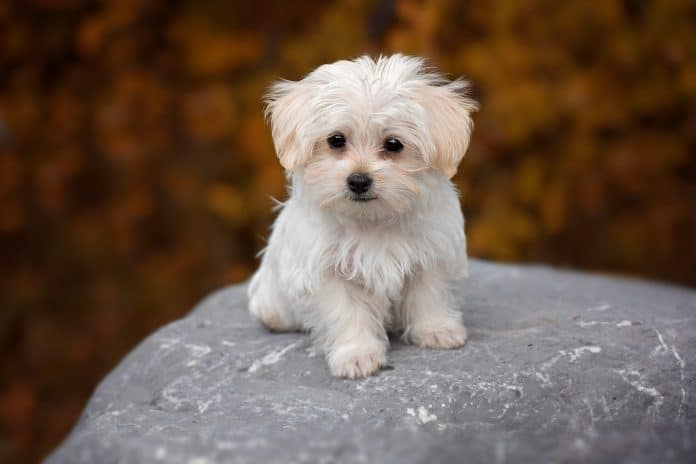 A Maltese is a tiny, delicate and fearless breed of dog.

They are known to be the most luxurious and sophisticated breed ever since BC.

They definitely would make you fall on your knees with their innate charm, adorable size, and floor-length coat.

They are the most recommended dog breed for families living an apartment-sized lifestyle, because of their adorably compact size.

A Maltese dog is a compact and affectionate canine, they stand 7 to 9 inches in height and weight under 7 pounds, which is why they’re also delicate.

Maltese were known as ‘comforters’ ever since ancient times and people believed they were capable of curing diseases.

They are highly affectionate and fearless, make great companions with your children and other family members too.

Maltese are a solid fit for couples and families living in apartments, who are looking to bring home a pet.

Even though they have a long coat, they don’t have an undercoat and cold weathers are a big challenge for them.

They don’t do pretty well in extreme weather conditions and are recommended to wear a protective jacket for chilly walks outdoors.

A Maltese dog doesn’t face many challenges during extreme weathers.

But still, they must be kept hydrated and indoors during summers.

Maltese have a very low tendency to bark or howl.

They are the calmest and composed dogs and would comfort you more than annoy you.

Even though they might be of the size of a cat, they are bigger in their mind and attitude.

They are terriers and would show unfriendly behavior with cats and other smaller animals as a natural instinct.

Maltese are generally friendly, and would not show aggressive behavior with other dogs.

A typical Maltese dog is more of a companion dog than a sporty one and doesn’t require rigorous exercise.

Their coats are long and silky, which makes them easy to groom and look appealing.

Maltese are playful with people they’re close to, they would constantly seek attention and would want to indulge in playful activities.

A Maltese dog temperament is well regarded and is what enables them to learn things quickly.

Typically a Maltese is a very intelligent breed and would learn things quickly.

The Maltese dog breed has a low potential to get involved in extensive mouthy behavior.

Maltese puppies do have a tendency to chew but get them habituated to chew toys and would never build the habit to chew on human fingers.

Maltese dogs don’t cost too high and fall in the mediocre price range of $120 – $400 USD as the buying price.

They might not appear as rugged and tough as a terrier, but they still carry instincts that of a terrier.

Being a toy breed, Maltese are the happy, charming and fearless breed of dogs and intensively affectionate with children.

They are very elegant with the way they carry themselves, having a long overcoat that runs to the bottom-most point.

They have a history that goes back to the fourth and fifth centuries when the Greeks were fascinated by the beauty and charisma of the Maltese dog breed.

Their beauty and elegance have been known to fascinate many great artists and philosophers, like Aristotle, who left describing the Maltese dog as ‘perfectly proportioned’.

Where Do Maltese Originate From?

As of today, Maltese has gone through a wide transition of names throughout history.

They were called the following over various shifts of Millenium.

Their history traces back to a huge time lapse which is back to the fourth and fifth century when Greeks were amazed by the elegant and charming appearance of Maltese.

Ever since Maltese are well regarded for their toy size, they are the smallest of all toy breeds.

They are a perfect fit for an apartment or condo sized living.

Although, they’re more than just their coat and appearance.

They are immensely loyal and devoted to their humans.

Maltese dog size is the smallest of all toy-sized dogs.

They are beautiful and elegant, standing at 7 – 9 inches in height and weigh under 7 pounds.

Their size and temperament make them amazing therapy dogs for autistic children as well.

As far as you might know Maltese for their innate appearance qualities, they more than just eye candy.

They are highly intelligent and learn new tricks and commands very easily.

They are also athletic and make great contenders at various dog sport events.

Maltese dogs can be stubborn at times, but they learn easily with positive training methods.

The long silky coats on this toy breed are deceiving, as it’s hard to recognize whether they have legs or they just levitate that way.

Their glorious and at times deceiving coats need care, regular brushing and combing to their skin avoid knots and tangles.

Maltese are quite vulnerable to dental diseases, and require frequent brushing.

Their eyes should be monitored and treated if wax or dirt is accumulated.

They should be constantly checked for any kind of dog eye discharge.

Maltese lifespan is higher as a result of being a toy breed, which is, 12 – 15 years.

In general, they are quite a healthy breed, but it is necessary to know about the various diseases they are prone to.

This condition is normal and rare, and there’s nothing life-threatening about it, most dogs live a normal life with this condition.

Luxation means is a dislocation of an anatomical part such as of a bone from a joint.

Patellar Luxation is when knee joint often of the hind leg gets apart from the place, causing pain.

This is a renal disorder when an abnormal vessel causes the blood to bypass the liver and the blood is not cleansed.

PRA is a condition which is detectable years before the dog gets blind.

It is a condition where there is a loss of photoreceptors at the back of the eye that causes blindness.

This is a rare condition which is caused by low blood sugar levels.

The symptoms can be detected when the dog shows weakness, a wobbly gait and maybe seizures.

The episodes of this syndrome usually start between 6 months to 3 years of age.

A condition where there are tremors all over the body, lack of coordination and rapid eye movement.

This usually happens when the dog is overly-excited or stressed.

There is nothing fatal about this condition, but still can be treated if diagnosed on time.

The Maltese dog should be fed according to their activity level, they might do well on a high-quality diet.

Commercial food or home-made food, both would work well for them.

Consult your vet to make a diet schedule.

They remain playful throughout their old age too.

Involving them in playful activities should be only incorporated after 8 months of age, as a thumb-rule.

You must give time for their bones to develop and muscles to coordinate.

When it comes to vaccinations – canine distemper, canine hepatitis and rabies must be given in the initial three months.

After a year, canine parvovirus is recommended.

As far as experienced owners of the Maltese dogs say, the maximum expenditure is on their food and grooming.

Maltese are great mates for children, as they are compact, loving and devoted towards their pack members.

They are also recently contributing towards being autism support dogs and allergy alert dogs for children.

These four-legged creatures are innately playful and socialise well with other dogs.

If they’re kept isolated, they show aggressive behavior towards other dogs – to remind you they’re fearless.

Which at times can cause them trouble.

Being terriers, they are ratters by instinct.

They have tendencies to show agitation and misbehavior towards cats and other smaller animals.

Maltese are amazing pets to have, as they are instant mood fresheners after a long day at work with their playfulness and snuggling.

With long hair, alert eyes and button-shaped nose they are a complete treat to eyes.

Intelligence is a great traits that helps them grasp things really well.

Maltese dogs as they were in ancient times are people’s favorite even now, they justify what Aristotle and other artists have described them by.

Do you have a Maltese Dog Breed?

We would love to know about him/her, do leave us a comment.

If you know someone who has a Maltese Dog help them by sharing this article.

It was nice having you here,

Happy Petting To You!

46 Cute Pictures of Puppies You’ll Have To See To Believe!