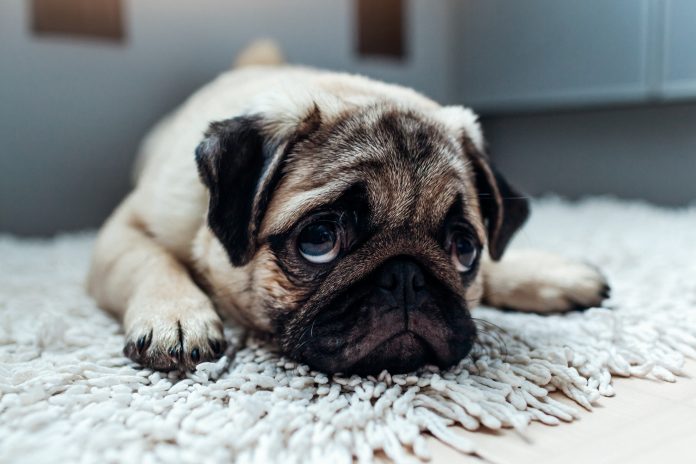 With so many bacterias, viruses and funguses out there, we all, humans and animals are prone to many diseases, some minor and some major. Ringworm in dogs caused by fungus is one such problem.

The fungal infection is pretty common in domestic animals, including dogs. So, owners should know about the symptoms, treatments and the prevention required for ringworm.

What Is Ring Worm And What Does It Look Like On Dogs?

It is fairly common for a dog to become infected with an internal or external parasite at some point in its lifetime. Ringworm is one such ailment, a dog usually faces. Though sounding like worm, ringworm is not actually a worm, rather it is a fungus infects our dogs.

The fungi involved are called Dermatophytes. The Dermatophyte fungi feed upon the dead cells of skin and hair creating a round shape, red scratch with a ring of scale around the edges and normal recovering skin in the centre. As the ring on itching skin appears as a worm, the infection is erroneously named as Ring worm.

Pictures Of Ringworm On Dogs

What Causes Ringworm In Dogs?

Any kind of contact, direct or indirect, can cause ringworm in your dog. Coming in contact with any contaminated object (rug, carpet, comb, toys, bedding) or person, makes this fungal infection spread. The fungal spores remains viable for upto 18 months and spreads with breaking or shedding of hair.

Ringworm can be formed on various body parts and even on the internal parts as well. Soil digging or smelling and infected person or object can cause ringworm on dogs nose or ringworm on dogs paw. Similarly, using an infected bedding can lead to ringworm on dogs skin. Eating or licking something contaminated can make the fungi go inside your body, causing ringworm in dogs stomach.

Symptoms Of Ringworm In Dogs

The fungi will be present within the hair shaft of your dog. Even after the hair sheds off, the fungi can still be infective and infected hairs can contaminate pet collars, brushes, and toys.  This fungi when present on carpets, couches, and upholstery are called fomites and can be responsible for the spread of the ringworm.

Common ringworm lesions are seen in multiple parts of a dog’s body. Though they are not life threatening disease, yet can cause a lot of discomfort to the dog and to the owners as well. They hair follicles of the infected area becomes very brittle, making the dogs shed the infective hair and spreading the infection throughout your home.

Pay a visit to the veterinarian for a checkup, if you notice the following symptoms in your dog:

Such changes can be symptoms of other skin issues as well. Cushing’s disease, hypothyroidism, or allergies from other parasites and bacteria can have similar set of symptoms.

Many may ask, ‘Is ringworm in dogs contagious to human? ’. The answer is yes, they are. In fact, not just to humans, ringworms are contagious to other domestic animals, too.

They are contagious to humans. Most people know ringworms by the name of athlete’s foot. Yes, they are the same. Children, elderly people are more prone towards these parasites, as they have weak immune system. They can even get to a completely healthy person with a good immune system.

In humans, ringworm appears as a round, red circular patch with itchiness around them. If you or a family member notices such symptoms, consult your dermatologist for cure.

Cats And Other Pets:

If you own a cat or any other pet other than the infected dog, it is advised to not let them make any kind of direct or indirect contacts till the dog is completely free of germs. The fungi responsible for maximum cases of ringworm in dogs, Microsporum Canis, is also responsible for 98 percent of ringworm in cats, which means the spreading of ringworm from cats to dogs or vice versa is quite high.

How To Get Rid Of Ringworm In Dogs?

While many of you must be thinking ‘How to treat ringworm in dogs? ‘, it is best if you consult a veterinarian rather than anticipating possible solutions. As soon as you take your dog to a veterinarian, he/she will perform “Wood’s lamp examination” which uses UV light to see the affected area. The affected part will fluoresce.

For accurate and precise diagnosis, fungal culture is performed by testing a collected piece of hair and scraped skin. The result may take couple of weeks to show up.

Depending on the severity of the infection, number of infants at your place and immuno-compromised people, your vet will discuss the treatment with you.

For mild cases, topical treatment like applying ointment over the infected area, bathing the dog with anti-fungal shampoo are advised.

The vet can ask you to trim or shave off the hair from the affected area for easy application of the medicated ointments and to ensure environmental decontamination. Shampoos with mixture of  Miconazole and Chlorhexidine are recommended.

n case of severity, oral medication is applied to the dog. Sometimes, they are used along with tropical treatment, too. This kind of therepy involves medication your dog for minimum 6 weeks.

Some of the oral ringworm medicine for dogs are Itraconazole, Griseofulvin, and Ketoconazole. Itraconazale can be used in both cats and dogs. Griseofulvin is also a drug used to treat ringworms in dogs but are restricted to dogs below the age of 6 weeks. Ketoconazole is the most commonly used meal-based anti-fungal drug. All these drugs have side effects.

Your dog has been treated and is out of recovery now, but you still need to watch out for contaminated objects in your house. This is a two-step process. First, cleaning shed hair as much as possible and disinfecting the entire place twice a week.

Following are the steps of environmental decontamination:

How To Prevent Ringworm In Dogs?

In doesn’t concerns to most of the owners to clean their house and toys every day, but it does to the owners who have had infected pets in past. Hygiene is the key. The ringworm spores can remain alive and dormant in carpets, beddings, toys, harnesses, leashes or furniture.

So, cleaning your house and shed hair on a regular basis, bathing and shampooing your dog with medicated shampoos and disinfecting the place twice a week will be enough to keep you, your pooch and your family far from such infections.

To know more about ringworms in dogs or get an infection check-up of your dog, contact your veterinarian.

You are all caught up and informed about ring worms in dogs. That’s a wrap from our side. Tell us about some of your home remedies for ringworm in dogs, in the comment section below.

A Guide to Apartment Dogs