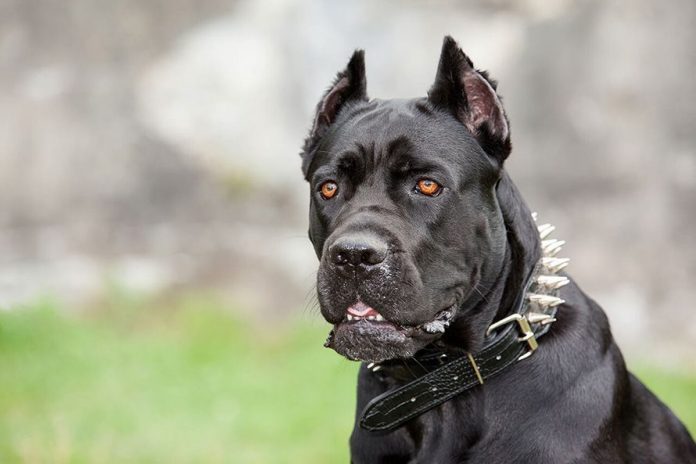 Prior to 1988, this breed was known only in southern Italy and was considered very rare.

They will not like to cuddle, and at times might acknowledge your presence but you can’t expect this breed to come to you just for petting or affection.

This breed is a muscular and smart-looking dog but just a word of caution that they will not be for everyone.

They might come as aloof at times and will never respond well to strangers or people other than their immediate family members so you will have to introduce him or her to strangers well.

Sturdy, with a strong skeleton.

Weight is proportionate to height and typically ranges from 90 to 120 pounds.

The average Cane Corso is quite large, measuring between 64 to 68cm and weighing in at between 45 to 50 kgs.

The Cane Corso is known to be reliable, trustworthy, and loyal, and they form strong bonds with their families becoming devoted to them.

They boast having a strong protective instinct, although they are gentle and affectionate by nature too.

It is flexible because Cane Corso can settle just as happily into apartment dwelling as outdoor living.

In case left outdoors, you need to provide adequate shelter to them.

They can adapt to cold weather since its coat will get thicker in the Winter.

However, they are not geared for extreme cold weather.

The breed standard does specify the coat not be ‘Too thick.’

The Corso can indeed be kept in cold weather; however, its thin coat is geared more towards warmer weather which increases their sultry weather tolerability.

The Cane Corso is not known to be a “barker” although any dog might start barking incessantly as a way of getting attention.

With this said, a dog would quickly let an owner know when something they don’t like is going on in their environment, but would not generally bark for no reason.

Possess strong instincts to chase and seize cats and other fleeing creatures.

Many will not tolerate another dog of the same sex, and some won’t tolerate the opposite sex either.

A good 60 to 80 minutes a day would be enough to keep a Cane Corso happy, fit, and healthy.

He requires mental as well as physical stimulation, or undesirable behavior might result.

This dog boasts having a short, dense and glossy coat which makes them low maintenance on the grooming front.

Like other breeds, they tend to shed the most hair during the Spring and then again in autumn when more frequent brushing is usually necessary.

The Cane Corso is a serious dog although when they are puppies, like all puppies, they are boisterous and playful.

Sometimes they bark as excitement for playing, but they are not the most playful dog breed.

Early socialization and puppy training classes are highly recommended for a breed as big and strong as a Cane Corso.

They are also intelligent, quick-witted, and strong, and they could quickly become unruly and wilful.

Cane Corsos have lower than average tendency to nip, chew, play-bite, or herd people. It’s a common habit during puppyhood, not aggressive behavior.

This is a working breed and loves to have a job or be involved in something.

If left to his own devices, he may chew your furniture, your shoes, and dig holes.

Cost to keep them is expensive.

On average, around $1500 per year is the cost of owning a middle-aged Cane Corso.

It is now one of two Italian “Mastiff” type breeds, along with the Neapolitan Mastiff, that descended from this war dog.

It has a broad head with a square muzzle that is as wide as it is long, giving the dog superior bite strength.

The ears are naturally dropped forward, though it is the preference of breeders to crop the ears into small, equilateral triangles that stand upright.

They drool occasionally, but when they make some potential snack is involved.

Breeders also typically dock the tails of this dog.

Where Cane Corso Came From?

The Cane Corso belongs to a subcategory of working breeds called molossus dogs, or molasses, named for the Molossi.

With the dissolution of the Western Empire in the fifth century, Italy’s legions and their dogs were out of work.

Michael Sottile imported the first litter of Corsos to the United States in 1988, followed by a second litter in 1989.

The Corso is a large, muscular dog.

At nearly 28 inches at the shoulder with a large head, and often weighing more than 100 pounds, alert expression, and muscles rippling beneath their short, and stiff coat.

Cane Corso is eager to please and fairly easy to train, but because some can be domineering, they are not a breed for a novice owner.

They are intelligent and eager to please, so they are generally easy to train.

The Cane Corso’s coat is short but double-layered.

The undercoat varies in length depending on the climate the dog lives.

This is a breed that sheds a little all the time, despite having a short coat.

You can expect a dog to have a big shed or to “blow coat” in a big way in the spring and sometimes in the fall before the winter coat comes in.

A rubber grooming mitt or a hound glove will remove the dead hair, and it helps remove dirt and promotes new hair growth as well.

An abnormal formation of the hip socket is Hip Dysplasia, in its more severe form, can eventually cause crippling lameness and painful arthritis of the joints.

GDV is also known as bloat or torsion is a gastric problem in dogs.

The mutation causes to form raised lesions on the retina.

The lesions alter the appearance of the eye but usually do not affect the eyesight.

Cherry Eye is a condition where a cherry-like mole is formed in the corner of the eye.

Ectropion in dogs is a condition where the lower eyelid rolls out of the eyes of dogs that have loose, wrinkled skin around the face.

Entropion is a genetic disease.

It leads to the folding of the eyelid internally, which gives a lot of uncomforting irritation to the dog.

Distichiasis is a condition of the eye in which extra hair grow out of the eyelash area.

It happens when there are two or more hair growing out of a Meibomian gland opening of the eye.

Canine Distemper, often referred to as ‘distemper,’ is among the most easily contacted common and deadly virus infections for dogs.

This disease is particularly fatal for young puppies and non-immunized senior dogs.

Canine Epilepsy is one of the most common neurologic diseases of dogs and a top concern of dog breeders.

Seizures occur among dogs when excessive activity goes beyond the normal threshold for brain function.

Some Cane Corsos after they have been neutered gain weight, so it’s important to adjust their daily calorie intake.

This breed is prone to suffering from allergies, and it’s important to see a vet sooner, bearing in mind the breed is known to suffer from Demodectic Mange Allergies.

If you are feeding a high-quality dry food, your dog will probably eat 4 to 5 cups a day.

It’s best to feed a mature dog twice a day, once in the morning and then again in the evening, making sure it meets all their nutritional requirements.

Since Cane Corsos are prone to suffer from bloat, it is important to feed them twice a day instead of giving them just one large meal a day.

Cane Corso puppies would have been given their initial vaccinations before being sold, but it is up to their new owners to make sure they have their follow-up shots promptly with the vaccination schedule for puppies.

As with any other breed, this breed needs to be groomed on a regular basis to make sure they don’t suffer from certain skin issues.

The average cost to keep and care for this dog would be between £90 to £150 a month.

When it comes to food costs, you need to buy the best quality food, whether wet or dry, which would set you back between £40 – £50 a month.

On top of this, you would need to factor in veterinary costs which include their initial vaccinations and their annual boosters.

The ideal Corso is docile and affectionate toward his family, including children

When Corsos are well socialized from a young age and puppies grow up with children in a household, they are known to get on well together, and this includes where there are other animals in the home too.

However, because of their sheer size, any interaction between very young children and dogs is best supervised.

When it comes to other dogs, well socialized Corsos are generally good around them, but precaution must be taken when they meet any new dogs.

They are known to be confrontational and will not back down if they feel threatened by another dog in any way.

They are not high prey drive dogs, and as such, they generally tolerate other animals.

However, if a cat or other animal decides to run away from them, they would think nothing of chasing them, and if they do catch them, the results could be disastrous for the fleeing animal.

By 1996, the Cane Corso was recognized by the Fédération Cynologique Internationale.

By the 1970s, only a few Corsos remained with peasants spread throughout the countryside.

In 1973, two individuals located, collected, and bred the remaining Corsos, and a decade later a breed club was formed.

This breed is not a good choice for first-time dog owners because they need to be handled and trained by people familiar with the specific needs of such a large and intelligent dog.

Something Fun About Cane Corso!

Let me tell you a fun fact about

The Cane Corso is known to be descended from the war dogs, known as Canis Pugnax, used by the ancient Romans.

Why Do Dogs Howl?