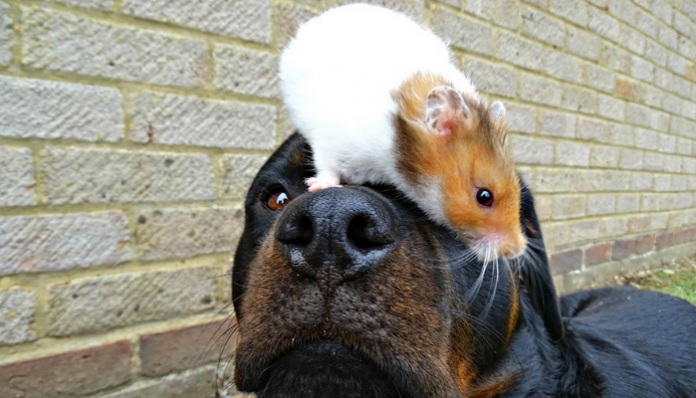 Be a pet lover or not; there’s hardly anyone who can ignore the adorability of small pets in general. When it comes to petting tiny-pets like a hamster or a chinchilla, the excitement and cuteness get overboard.

But that’s a challenge for the pet owner on many levels, too. If you decide to keep multi-species pets together, it gets way more difficult. But when you can hack the way to keep both in peace, it’s not that worrying, either.

We will find out today How to keep a dog, hamster and a chinchilla together.

The Difference between a Hamster and a Chinchilla

While a chinchilla is expected to live for more than 15 to 20 years naturally, a hamster gets to breathe for 3 to 4 years in general. That means if you are petting two animals in the same cage for 10 years, it will be one Chinchilla and several hamsters in it during that time.

The difference in social life between the two is oddly visible. Chinchillas are way more social beings than hamsters. A chinchilla loves to socialize with other chinchillas and befriend them. In the wild, chinchillas are seen moving in packs and groups and not be a lone-wolf.

On the other hand, a hamster is a pretty notorious animal. It doesn’t feel quite urged to befriend others and often becomes aggressive if put in the same cage with another hamster. Syrian hamsters are infamous for their nature of killing other hamsters, as well.

Should You Keep A Chinchilla And A Hamster Together?

As you can see from the lifestyle of the two pets, they are far from having something in common except for the fact that they both are small in size. But is it a good idea to keep both of these pets in the same cage?

So it’s better to keep these two animals separated and not be kept in the same cage. Again, even if you keep these two in two different cages, you need to still separate the vision of these animals. Try covering both the cages so that they can’t see each other and live peacefully.

How To Keep A Chinchilla?

If you ever had an encounter with a chinchilla, you would know how noisy they are, especially during the night-time. So, never put their cage in the bedroom. You don’t want to ruin your sleep for the rest of your life.

As for the chinchilla cage, it should be a bit large for a small pet. That’s because chinchillas are extremely playful animals. They need enough space and area for moving to-and-fro. Ideally, you need a cage measuring around 1 meter by 1.5 meters by 1.3 meters. Make sure there are multiple shelves at different heights.

Chinchillas love to sleep in enclosed beds during the daytime. A good option for this can be wooden or paper boxes. But make sure the boxes have proper space for multiple chinchillas.

How to Keep A Hamster?

As you know, hamsters are tiny animals, tinder than chinchillas. So, the cage enclosure should be tighter than the cage for a chinchilla. If you own a Syrian hamster, you may need the cage to be a bit larger than the average hamster cages. As this special breed comes in a larger size than usual hamsters we see, it will need more space to move freely.

So, the space between cages bars needs to be as narrow as possible to prevent the little guy from escaping or accidentally drop out of the cage.

Proper ventilation is vital for the hamster to live a healthy life. Never put its cage in a confined, damp, and non-ventilated place. Keep it beside an open space or a window through which fresh airflow is confirmed.

Keeping soft bedding inside the cage is a must. Hamster hates it when the bed is hard and flat. So keep inside soft papers or hey or any ready-made bedding you find in the market.

Can dogs live with Chinchilla?

The straight and simple answer is no. These two animals can’t live together for some obvious reasons. A dog, no matter how behaved it is, is actually a predator. It has that hunting-extinct in it that makes it hunt down its prey while it is not in its best mood.

But that doesn’t mean that you can’t bring a chinchilla home. Keeping these two pets separated and at a safe distance with proper monitoring can ensure a harmonious living of these two pets.

It’s not that you took one Chinchilla home and can expect your dog to be all happy and excited. This doesn’t work that way. Try to go slow and steady.

Keep the Chinchilla inside a secured cage and let your dog get used to the smell of his new friend for a while. Try to interact with the Chinchilla while your dog sees it. It will send it a message that this little fellow is a family member.

After a few days, you can let your dog sniff and go up close and personal with the pet being inside the cage. Try appreciating your dog while it shows a positive attitude towards the Chinchilla; it will make sure he acts this way in the future.

While chinchilla food is prepared considering the tiny digestive system of a chinchilla, it won’t be of any use or harm for a dog if it eats it. There’s no point in feeding a dog some of the chinchilla food. In some extreme cases, the dog may show absurd pooping behavior upon consuming such tiny-pet food.

Although both hamsters and chinchillas are tiny animals, they do share some differences that don’t make them the best of pairs. It needs quite a lot of attention and care if you’re planning to home both of these species under the same roof. You can follow the tips we have shared here today to make sure you’re doing the right things!