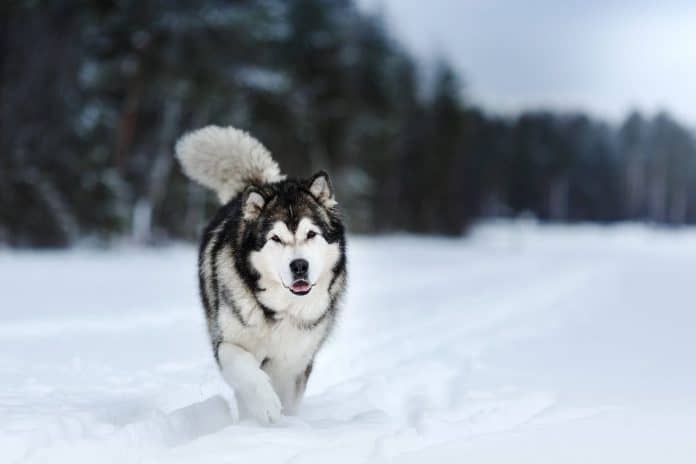 The Alaskan Malamute possesses a muscular, well-built body ideal for stamina and strength requirements. It is among the oldest breeds of dog.

It is an intelligent and energetic dog breed. Alaskan Malamute dogs tend to shed highly and require a lot of grooming.

They need thorough exercise to fulfill their energy requirements. Having an open space will allow them to burn their calories sufficiently.

The Alaskan Malamute size is large enough to scare away any stranger. It measures roughly around 24 inches in height, and about 75-85 pounds in weight.

Malamutes are playful extroverts. The dogs of this breed are friendly with anyone they meet. They like spending time with their family members as they are pack animals. Do not forget that they are great with kids.

They are ill-suited for apartment living and need plenty of open space to roam around, as they are an active breed.

They have a high tendency to howl, which may inconvenience the neighborhood.

Having their ancestral origin in the wild arctic lands, they are wild in nature and also thus unfit for apartment living.

They have excellent cold weather tolerability since they are accustomed to chilly climatic conditions. Their thick undercoat and overcoat allow them to tolerate extremely harsh cold weather. The coats are woolly and the tails are very well furred.

In the winter season, they prefer to be in the snow. To protect itself from blowing snow, an Alaskan Malamute dog often wraps its tail around the nose and face.

Even in summer, an Alaskan Malamute dog should be left to play in a pool filled with cold water. Taking it outside during a hot day should be avoided.

Significant freshwater and air conditioning should be given to keep it going during summer.

Mals feel uncomfortable in the summer heat, hence it would be best to keep them cool during summer.

Malamutes are usually quiet dogs, barking very seldom. They are known to talk by making a “woo woo” sound. They do howl often, and when they do, they sound like wolves. Malamutes who feel lonely or bored often howl.

With proper training, they can be completely discouraged from barking.

A Malamute has a tendency to chase cats whenever it sees them. If it was brought up with them and trained appropriately, it won’t chase cats.

Mals need to be supervised during their interaction with other animals, otherwise, they may see small animals and cats as a fair game.

The Alaskan Malamute Dog considers smaller dogs as its prey, and can even kill them. Proper socialization with other dogs at an early age can be helpful in making friendship with them.

Being a member of the Working Group, the Alaskan Malamute Dog constantly desires tasks to do.

If it is taken on long walks, hikes, sledding, and other such physically demanding activities, it will prosper.

However, if it is given insufficient exercise, it will soon become dull and is likely to cause havoc.

Regular brushing on the Malamute’s body is required for a proper Alaskan Malamute grooming. To keep its outer coats dirt-free, you should at least brush it one to three times a week.

Brushing its teeth regularly can prevent harmful diseases from affecting it.

Alaskan Malamute dogs are a treat to watch when playing around. They often appear active and outgoing.

As puppies, they are very playful. They are great with kids when under supervision.

Malamutes are highly trainable dogs. When trained correctly, they display high intelligence. They need to be trained from an early age so that they socialize well with other animals.

They are not difficult to housetrain. They must be trained to be obedient from an early age as their nature is very independent.

Alaskan Malamutes are very smart and intelligent. Their intelligence is more prominently seen when trained correctly.

Mouthiness is generally seen regardless of the Alaskan Malamute temperament. This attention-seeking behavior should be discouraged from an early age to later prevent it in later life from biting in aggression.

Malamutes are priced heavily. The average Alaskan Malamute price is anywhere from $1200 to $1700.

Malamutes are intelligent dogs. If not given consistent leadership, they may end up being your leader.

They are playful and energetic. Open spaces are preferred by them as they like to roam around and need to burn their energies off.

Not suited to apartment life, the Alaskan Malamute dogs shed highly and need a significant amount of grooming.

Being more suited to live in colder climates, they must be kept in shade and given fresh water during the summer season.

Alaskan Malamutes can master physically demanding sports such as weight pulling and sledding.

The Alaskan Malamute lifespan is of 12 – 15 years.

They are easy to train and must be trained correctly from an early age.

Where Did Alaskan Malamutes Come From?

Alaskan Malamute dogs were believed to have originated from the Alaskan region in North America.

They were brought up by the Malemuit people of Alaska, who used them as sled dogs who could carry heavy goods over long distances.

They are commonly referred by the nicknames Mal, or Mally.

The Alaskan Malamutes have a history of being near-extinct and then becoming one of the more popular dog breeds.

A bulky Alaskan Malamute adult can even weigh more than 100 pounds. However, excess weight cannot be carried by a Malamute’s body.

Its head is wide, and when alert, the dog’s triangular ears stand erect.

Because of their large size, they may give an impression of looking like wolves to strangers.

Alaskan Malamute training is not difficult to carry out. With loving training given at an early stage, they can acquire the ability to develop friendship with other animals.

An insufficient amount of exercise can make them feel bored and likely to cause inconvenience to the people around.

They are highly independent and can sometimes be stubborn as well. So, some Alaskan Malamute behavior such as digging can never be prevented.

Instead, special arrangements for digging can be made, such as fencing, which would prevent it from interfering into neighbor’s territory.

A lot of grooming needs to be done to keep the Alaskan Malamute safe from diseases and from accumulating dust and dirt on its body.

Frequent brushing is required in order to keep its coats clean and to deal with excessive hair during its hair fall season.

Brushing its teeth two to three times a week will help eliminate bacteria present inside its mouth.

Trim their nails carefully as long nails may harm their eyes while scratching. Examine and clean their ears for infection, and their feet.

The hip is a ball-and-socket joint. When thighbone and hip joint do not fit properly, this condition occurs. It causes severe pain and reduces the Malamute’s mobility.

Symptoms include pain and lameness on rear legs. With age, the dog shows signs of developing arthritis.

Hip dysplasia can occur due to heredity, as well as due to injuries.

Cataracts develop when the Alaskan Malamute puppy is 1 to 2 years of age. This does not often lead to blindness in them.

This can occur from the age of 8 weeks. The dogs having this condition often collide into and fall over things.

Alaskan Malamute dogs find it difficult to come out in the sunlight and they prefer staying indoors. These signs vanish at night time, however.

This is a hereditary condition that causes decreased coordination and instability that results in a labored gait.

Dogs with this condition may fall while standing or walking, or appear to walk awkwardly. This occurs at approximately a year of age.

This is a genetic disorder characterized by birth deformities in Alaskan Malamute puppies. The shape and length of limbs become awkward in this condition.

When the thyroid hormone produced is lower than normal, this condition occurs. Symptoms include dry coat and mental inactivity among others. Medication is a must in this case.

The Alaskan Malamute diet should be prepared to keep in mind its large size and high energy requirements. Their feeding needs change as their age progresses.

Below given nutrients are necessary for your Alaskan Malamute:

Water: Dehydration can result in unconsciousness; so providing them sufficient amount of water is a must. Keeping water easily accessible to it is a wise thing to do as your dog can drink whenever it feels thirsty.

An Alaskan Malamute can get viral infections just as any other dog. Some common infections are of rabies and distemper. The onset of these can be avoided by vaccinating the Mal.

The following care should be taken for your Alaskan Malamute dog:

Due to their high dietary requirements, the cost of food and treats can go up to $500 to $700 a year.

If you choose to have a dog walker for your Mal, expect it to cost around $25 to $45 per hour.

Also, it’s better to keep aside money for health concerns, as ill-health can yield a visit to the veterinarian.

Malamutes are great with children. They love to be their center of attraction. However, supervision is required, as, with their energy and liveliness, they can end up hurting children by knocking them over.

Teaching children about how to touch and conduct themselves in a Malamute’s vicinity can go a far way in making a favorable relation. Regular supervision is needed for all children.

To make Alaskan Malamute dogs friendly towards other dogs, socialize and train them from an early age.

Mals consider cats as their prey. They may chase and catch hold of them. Supervision and training are required in this regard.

Malamutes, having originated from the chilly climate of Alaska, are outdoor dogs, very well suited for cold weather, and not so well-suited for hot weather.

They thrive on rigorous activities such as sledding and weight pulling. Without adequate exercise, they become bored and destructive.

Fencing must be properly done, otherwise, they may exploit the unwelcoming neighborhood region.

Alaskan Malamute dogs are quite friendly with humans. Thus, they are not good as watchdogs.

Malamutes are heavy shedders, and regular brushing of their coats will keep them well-groomed.

They are muscular and big in size, with high body weight and height. Their appearance can scare away intruders.

If not cared properly, some health conditions can arise in them such as in bones, in the body, with the nervous system, and hormonal ones.

Feeding needs vary according to their age, and feeding in excess can lead to obesity in them.

Something Fun About Alaskan Malamute:

The Malamute breed’s origin goes back 5000 years ago in the cold regions of North America. The settlers used it for tracking down and hunting bears.

They were used to pull heavy loads across the snowy roads. They were used during World War I for the French army group who was stranded in mountain outposts.

The Alaskan Malamute dogs were used in World War II as mine sniffers, weapon carriers and as rescue dogs.

Mals are relatives of the Asian Siberian Husky.

Humans can even persuade Mals to sing.

The habit of Digging comes naturally to Mals. They can’t be trained against it but can be allocated a specific region to dig.

Malamutes were thought to be partly wolves because of their appearances. They were portrayed in movies as wolves.

They have a thickly furred tail, which they use to protect their nose and face from the blowing snow.

Let us know about your thoughts in our comment section!

Stay tuned to get more info on dogs and dog breeds.

Why Do Dogs Have Whiskers? Can You Cut Them? Do They...