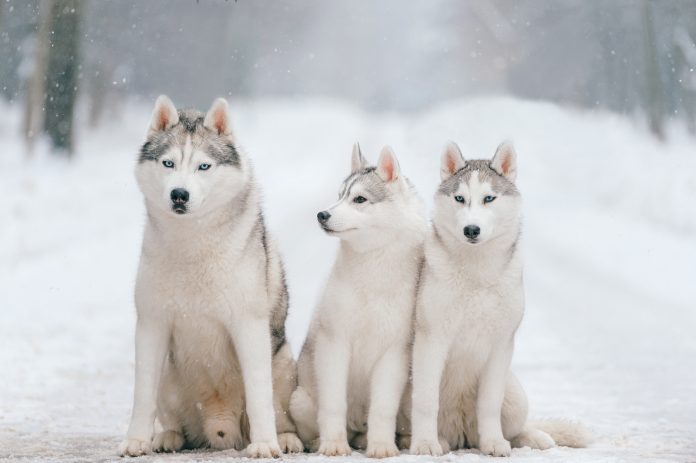 Siberian Husky, the Russian originated sled working dog is an independent, intelligent, dignified and a remarkable dog breed to own.

They are medium-sized wolf faced dogs recognized for their attractive eye color and the ability to carry a light load in moderate speed over long distances in the snowy regions.

One may mistake it with the Alaskan malamute who’s a distant cousin of this dog breed.

Huskies can live in temperatures as low as -50 degrees to -60 degrees Celsius with the thick double-coated fur.

They are lightweight dogs corresponding to their fit bodies for long-distance transportation.

A family that raises a Husky will have a happy and cheerful surrounding with the venerating behavior of the breed.

The Siberian husky loves being petted by its family.

Huskies originate from the Siberian region of Russia.

They have the characteristics of living in the wild snow-filled mountains for ages.

This is one of the reasons why raising this dog in an apartment is unsuitable.

Siberia drops its temperature to a brutal record of more than 100 degrees Celsius.

The origin of Sibes from this region has helped them tolerate cold weather with ease.

Being a cold regional working dog does not mean the Siberian husky is intolerant to hot weather conditions.

They have a special inner and outer coat that protects it from sun rays and the heat and maintains its body coolness.

If you ever observe a Husky, you will notice that they generally do not bark but howl.

Before considering having a Siberian husky as a homely pet, be aware of its noisy howling habit.

Sibes are generally friendly to all animals including cats.

They can be brought into a family having cats but under supervision.

Earlier, a husky was known to be a pack dog and considered itself the strongest when ventured in packs.

This makes them extremely dog-friendly.

Yes, exercise needs are among the most important needs to raise a healthy and happy Siberian husky pup.

They would require at least 60-90 minutes of daily exercising.

Regular brushing and once in a week bathing is enough to groom a Siberian husky.

The breed is a low maintenance dog that requires no major grooming care.

Huskies are fortunate to possess a fit, athletic body.

This is because of its playfulness and the ability to work hard even in extreme weather conditions.

First-time dog owners are suggested to NOT own a Siberian husky as it a stubborn and a self-willed dog breed.

They have the ability to quickly take the role of a leader that can work against the person who agrees to train it.

This can be prevented by keeping the superiority in the hands of the owner right from the early age of a husky puppy.

This would make it simpler to train the Siberian breed.

Wolves are regarded as cunning animals and belonging to the wolf family makes a Siberian husky adopt the traits of being a smart and cunning animal.

They are a fastidious breed apart from being gentle and friendly.

Although they are smart, they are also believed to be single-minded as a working dog.

Just like most of the dogs, this dog too is said to be mouthy.

They are likely to lick and bite people around in a friendly way.

Buying a husky in America can be an expensive decision as huskies cost about 600-800 dollars.

Although one can adapt it from adoption centers, it is advised to check for any disease it has inherited.

A little Siberian husky pup would not weigh more than 2-4 pounds.

They are extremely adorable little furry and fluffed pups having almond-shaped eyes to enhance its beauty.

Siberian husky can have either blue or brown eyes or both.

The phenomenon of having two different colored irises is known as Heterochromia.

Their fur is softer as a pup to that of an adult.

Little huskies get along well with their friendly nature in arms that shower love.

A fully developed adult is heavy to the extent of 60-65 pounds.

They display a fit muscular body that is similar to that of the Alaskan malamute, but smaller in size.

The Siberian husky has a straight topcoat and a soft dense undercoat.

They are used as sled dogs for transportation even today in Alaska, Canada and throughout the region of Greenland.

The Siberian swirl has earned prestige by serving in the United State army’s Arctic search and transport command during World War II.

Where Siberian Huskies Came From?

The name itself tells us that this dog breed hails from the Siberian region of Russia.

The name husky is said to be derived from the work ‘esky’ that came from the traditional group of people named ‘Eskimo’ that lived in Siberia.

And if researches are to be believed, the DNA shows that they are the oldest of all dog breeds.

Their activeness and heavy endurance made them popular as working dogs for transporting light requirement load over long distances.

Their beautiful thick fur has recognized them as the ancestral inhabitants of the Arctic in the northern hemisphere.

Huskies have a moderate size to have as a residential pet.

It is neither too large nor too small.

They are just perfect almond shaped eye dogs that grow to a height of 20-24 inches at shoulder level.

A male Siberian husky is heavier and taller as compared to a female one.

They tend to be heavier if the skin coat fur is long and dense.

Training a husky can take a whole lot of effort and time because it is very difficult to train one.

Their stubborn nature and unwillingness to follow instructions can go against a trainer.

But training dogs is essential.

An untrained dog is similar to that of an illiterate human being.

The right way to train a Sibe is by being consistent and taking authority in one’s own hands.

They are known to be pack followers and can follow what the leader wants it to.

Huskies are clean dogs with a sweet odor.

They would not require much grooming but regular brushing.

While brushing their thick coated fur, one can use a wide-toothed comb first followed by a fine-toothed brush.

This will help in the complete removal of shed hair stuck on the body.

Even in the summers, the dog breed can tolerate the temperature having a special inherited fur that keeps the sun rays away from the body.

Also, it is advisable to limit the number of baths as it would drain away from the essential oils of the body and cause itching to the dog.

Just like any other dog breed, the Siberian husky is prone to a number of diseases.

The following are a few of them in accordance to the organ it affects.

A juvenile cataract is a disease that makes the sight obscured by clouding the lens of the eye.

This results in loss of sight to the beautiful blue/brown eyes of this dog breed.

This disease affects the cornea of a Siberian husky.

PRA is a genetic disease that causes bilateral degeneration of the retina.

It causes loss of vision and sadly there is no treatment to it.

If your husk pup shows any symptoms of PRA, one should consult a veterinarian immediately.

Canine glaucoma is a chronic disease that can cause serious damage to the optic nerve of the husky.

If left untreated, this disease can cause permanent blindness and loss of visual field.

PUD in a Siberian husky can break the inner lining of the stomach.

Huskies aren’t fond of eating much.

They are capable of skipping meals hence, a high value of nutritional Carbs, fats, and protein should be included in their diet.

The following are a few food items that should or should not be included in their daily meals.

Foods Not To Include

All dog breeds require vaccination and the right care.

It is essential for healthy development.

The following vaccinations are to be given to a Siberian husky in accordance with its age.

DO NOT over-vaccinate or regularly vaccinate a husky dog.

This might just act as an excessive drug in its body.

A great Siberian husky comes along with great care.

The following points should be taken care of

On average, the total expense incurred on a Siberian husky per month would sum up to 90-120 dollars.

Huskies are excellent friends that love to play with young kids.

Their behavior is sweet and does not tend to harm kids.

However, no breed should be left alone with children.

Earlier, Siberian Huskies were seen roaming in a pack of dogs.

They love getting along with other breeds and are not considered to be harmful to them.

Sibes are friendly to nearly all animals.

They behave well with cats after being trained to do so.

If you are looking for a curious, friendly and noble-looking pet dog, your search would complete at a Siberian husky.

Siberian Huskies have pointed triangular ears that distinguish them from other similar looking breeds, one of them being the mighty Alaskan malamute.

But many first time buyers fall for its beauty and purchase it without knowing completely about its features and characteristics.

Sadly, this is the main reason why they are the prime candidates in shelter homes.

Siberian husky is termed as the most wrongly purchased breed in the world.

Although the husky is an adorable pet to own, they are extremely unsuitable watchdogs.

A Siberian husky would welcome anyone in the house.

Something Fun About Siberian Husky!

The Admiral and his expedition with the Siberian huskies

In 1933, a navy rear admiral Robert Byrd brought 50 Siberian Huskies along with him to his Antarctica expedition.

This expedition proved to be a great incident for the recognition of this breed to the world.

They proved to be great companions with excellent endurance and speed.

In many parts of the world, Siberian huskies are popularly known as escape artists.

An escape artist is said to be the one who runs away from traps and cells where they are punished and kept.

Siberian huskies to possess this characteristic.

They are moody dogs who prefer running away in a catch of prey animals and often do not return.

The Sibes were ancient wanderers.

They traveled places in packs in search of food and shelter.

This makes them an unsuitable pet to own.

Owning a Siberian husky is equivalent to owning a noble dog in the United States of America.

If love and warmth are what you need, the Siberian husky is one of the best to have.

The husky’s moist nose with watery innocent eyes will make your day worth.

They are extremely playful and low maintenance dogs breed.

What more would you ask for?

Own your own Siberian husky today, and consider adopting a little homeless one rather shop.

9 Indian Dog Breeds You Didn’t Know About With Price List.

Why Do Dogs Chase Their Tails?