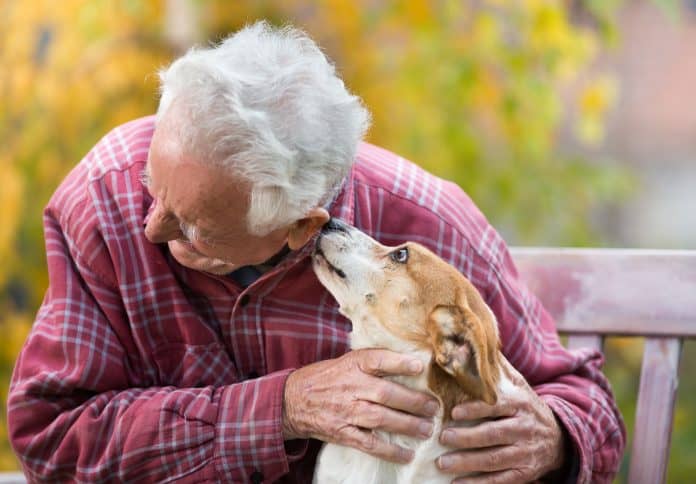 Dogs are the least demanding friends anyone can make; you don’t have to live up to their expectations and they’re always happy to see you.

Therapy Dogs are widely known nowadays, dog therapy is a program where some specific breeds of dogs are trained in order to provide love and affection to people who’re going through tough times like fatal health diseases or mental health issues.

Today’s world is more driven with logical and technical based procedures to cure a person who’s suffering, but every time a person is going through depression, anxiety or disease as fatal as cancer or a condition as unjustified as paralysis – more than physical it is the mental suffering that worsens the conditions.

The power of emotional reassurance is often underestimated in medical terms.

Humans are emotional beings and what works the best when time gets rough is emotional support.

Why dogs are the best suited for this job?

It is simply because they show a great deal of interest in you, which sparks positive enlightenment within every human being.

What is a Therapy Dog?

As of now, ‘therapy dog’ is a term but is not monitored by any regulatory body worldwide.

They often serve their purpose when an individual needs therapy.

In the United States, a service dog does the job of both – providing a service and that of a therapy dog.

A service dog, in general, is different from a therapy dog, a service dog is a term used for any dog which is trained to support a person who has physical disabilities like visual impairment, hearing impairment, mental disorder, seizures, mobility impairment, and diabetes.

The art of dog therapy often makes me think that how ‘love’ alone can create a drastic difference in the lives of people, globally – in such a technologically driven life space.

Labrador Retrievers, undoubtedly ace the position for being the best therapy dogs.

When your days are monochromatic, Labrador Retrievers would fill it with colors you didn’t know existed just by their presence.

Labs are the most popular dog’s everyone knows about and is also acclaimed to be as America’s favorite dog breed.

In the early 1700s’, these dogs were well regarded for their usefulness as they were hard-working and used to help fishermen by hauling nets for them, fetching ropes and retrieving fishes that fell out from the hooks.

Labrador Retrievers are highly trainable, obedient and affectionate with people and kids.

They are always the most enthusiastic to meet new people and would comfort you with their presence until you forget about what’s keeping you low.

French Bulldog is a miniature version of the Bulldog, and the best feature about them is – if you observe them carefully, it’s as if they’re always smiling and that makes you smile automatically when you see them.

French Bulldogs from the time of its origination are great companion dogs and one of the best therapy dogs.

Their innate friendliness is bound to win the hearts of everyone and uplift people.

In early times, they were excellent ratters. But now, they more prominently are known as a family dog.

They bond amazingly well with strangers and other animals.

They might not be the most aesthetically appealing, but with the amount of love and comfort, they’ll shower you with.

It will be hard not to be around them all the time.

Greyhounds are often allocated with the term ‘grace’, with their elegant and sharp features; they’ve been known as the source of inspiration for many artists, poets, and kings in the early ages.

They are aesthetically very appealing and it gives you the feeling as if they’ve been crafted with great precision by a sculptor.

Greyhounds are very subtle, sweet and an extrovert when it comes to meeting new people which makes them solid contenders for being a therapy dog.

Their bodies are structured to be aerodynamic and enable them to attain great speed while running.

Their grace is bound to charm you in a way, that makes them unforgettable.

Golden Retrievers are one of the most admirable dogs with the thick coat of golden-colored hair, innocence and warmth bleeding out from the eyes and a behavior that makes one feel welcomed every time you cross paths with them.

They are intelligent and coachable and whenever there’s a vacancy for a therapy dog – Golden Retrievers would always be one of them.

During the 18th century, Golden Retrievers served the purpose of retrieving hunted animals like ducks, fishes, and other smaller animals because of their soft mouth and grip.

They’ve not only stood out as being great retrievers but are also superb family members with high affection towards kids and other members.

The Poodle is the national dog of France, with the dense and curly coat of hair.

Poodles are mostly represented as show dogs due to their poised features and curly hair which gives them an antique look.

Apart from that, they are out of the box intelligent and easily trainable which makes them one of the best therapy dogs.

They are sweet, fluffy and are very dynamic and eager to meet new people.

It would brighten up anybody’s day seeing an excited Poodle waiting for them to play with.

Pomeranian is that one breed that naturally makes you happy and it’s tough to beat the urge to pet them if they are spotted somewhere.

It ranks 6th on the list of the best therapy dogs.

With a fluffy body and big sparkly eyes, they can be the most amazing therapy dogs, being able to instantly drift the mood of a person positively.

They are the most compact sized family dogs and are great for apartment sized living.

Being highly active, they tend to lick and jump a lot on meeting new people – expressing its happiness to make a new friend.

Them just being themselves is what cheers up most of the people.

Yorkshire Terriers are the most popular toy sized breed in the U.S., making them a perfect positive reinforcement for children who’re unfortunately confined to a hospital.

Their personalities are bigger than their size portrays. Being tiny in size, lovable in nature and moderately trainable – they make amazing therapy dogs.

Yorkshire Terriers are the most fashionable dogs with the silky fur coat, which grasps the attention of everyone around.

They can be a bit mischievous at times but are also extremely obedient.

German Shepherds are well accredited for their trainability, be it for any purpose – they are suitable for all – service dogs, therapy dogs or police dogs they can handle it all well.

Even though they appear rugged and beastly in their appearance, they have deeply infested qualities of gentleness, compassion, and warmth which makes them highly useful for therapies.

German Shepherds are greatly respected worldwide for their brevity, courageousness, and loyalty.

They are known to be the ones who’d risk their lives for their loved ones.

Their unique appearance not only makes them adorable, but they’re also the notorious and playful character that they are; making them great as therapy dogs.

Dachshunds are generally hunter dogs, which were bred to hunt smaller animals like badgers and rodents – which also makes them highly trainable as.

Dachshunds are incredibly kid-friendly dogs, which makes them a perfect companion for kids in hospitals and schools, who really need to be felt comforted and for stress-busting sessions at schools.

Beagles are claimed to be one of the best companions for children which fits the criteria of being a therapy dog.

They’re active, comforting and are irresistible with their dark eyes, compact size and fun-loving nature.

The best part about them is they’re always high-spirited for new people.

They’re also greatly affectionate with their families and are great attention-seekers as well.

They’re naughty at times, but apart from that, they’re gentle, sweet and humorous in nature.

They tend to make everyone laugh and love the attention that comes along their way.

Only those dogs who are naturally friendly must be considered, and I’ve listed the top ten best dogs for the purpose.

With the fast pace of the changing world, most of us seem to be going through life with a lot of emotional gap between us, At times it surprises me with way dogs are filling that gap just by making us feel ‘valued’ without words, but just by acting on it.

Therapy dogs have mastered the art of innate portrayal of ‘love’, as even the dictionary entitles it as a verb – love is an action, and therapy dogs are creating a huge difference in lives of people just by providing what they’re most capable of, and that too being unaware of it.

When an individual is encapsulated amidst the walls of a hospital or a room, suffering from an incurable ailment or a continuous loop of mental health barriers, living in the greyscales expecting from less to absolutely zilch out of life.

Have you ever had an experience with a therapy dog?

If not, are you planning to visit therapy dogs for a day, just to melt down some worries?

If you’ve had an experience with a therapy dog, kindly share about experience and let us know in what way you think therapy dogs are creating a change.

Feel free to comment and share this link to make people more aware of dog therapies, just in case they’re looking for a stress-bursting session.

Kindly interact with us, we love to hear from you!