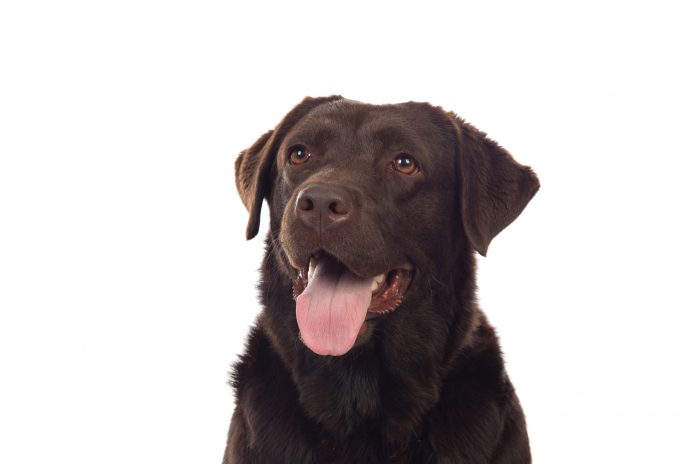 Energetic, affectionate, and a friendly dog, a Chocolate Lab weighs above 80 pounds and has a lifespan of around 10-12 years.

From the time they started to gain popularity, they have become one of the top alternatives for home dog buyers.

Chocolate Labs are great family dogs. They are the Labrador Retrievers of brown color.

These dogs were seen occasionally observed to be a part of black Labrador puppy litters.

Historically, they were disapproved and were hence slaughtered in bulks. Only the black Labradors were considered desirable and were respectfully preserved.

The History of Chocolate Lab

Labradors originated in the late 19th century. First born in England, they soon ended up in Newfoundland – a part of North America, and later came back to England.

The brown Labs don’t vary much in color. However, a change in the shade of brown can be seen throughout the Chocolate Labrador lifespan.

Labs initially were used by the fishermen of Newfoundland. When they were taken back to England, they observed the brown color Labs appearing in black Lab litters.

In the second and third decades of the twentieth century, liver Labradors increasingly started to appear. Back then, they were used in shooting sports.

Those who liked the brown Labradors named them Liver Labradors and this name remained prevalent until the late twentieth century. The breeders considered it as a defect and the brown Lab puppies were slaughtered, which was a common occurrence.

Since the 1960s, the brown Labradors started gaining wider popularity. The craze for these dogs began with homeowners who gave the word “Chocolate” to their name.

The Genetics of a Chocolate Labrador

A gene is a factor that decides what a dog will look like, and what color he will have after birth.

Genes always come in pairs. The gene that determines that a Labrador will be brown in color is represented by “b”.

The gene that determines that a Labrador will be black in color is represented by “B”.

Black dogs are predominantly seen because even if a Lab possesses one gene of brown and one gene of black, the resultant Lab will be of black color.

Only when there are two brown genes in a pair, does a brown gene dominate and a chocolate Lab is formed. Merely a single brown gene in a pair won’t do the trick.

So, even if a black Labrador has a “Bb” gene pair, he can pass down a brown gene to his children and thus keep alive the possibility of producing a Chocolate Lab in the upcoming generations.

The Show and Working Retrievers

In the upcoming decades, the Labs became popular as show dogs as well as pets.

The working Lab (field bred Lab), also known as an American Lab, has been a big part of the working community and is rare to find.

The size of the Chocolate Labs differs quite a bit from one to the next. Show Labs are heavier than other Labs, and are also less agile and slower than field-bred Labs.

The English Labs sometimes reach a weight of 80 to 90 lbs. and not be overweight or fat at the same time. On the contrary, American Labs are much lighter.

The English Chocolate Labs also tend to have a thick tail that resembles an otter’s tail and a thick and head.

A brown Lab inherits almost all of these size traits because of their origin from the bloodline of show dogs.

The Temperament and Intelligence of a Chocolate Labrador

The Chocolate Labs are not just highly energetic and amicable, they do well with humans as well as other animals. Very good as companions, they are affectionate and cool. The American Labs are seen to have a more acute prey drive, or the desire to chase and catch than the English Labs.

They are also faster in speed and are better suited to races. Not only that, they are more receptive to training and thus more sensitive. They will be craving to please the owner as Chocolate Labs rely heavily on their approval. Along with their expertise in hunting prey, they have this characteristic of obedience.

The show dogs may possess an uncompromising temperament as opposed to English Chocolate Labradors, who appear to be always cool. English Labs are somewhat known to be playful.

The American Chocolate Labs being more serious, does not mean that they are cleverer than English Labs. The show Labs are certainly less inattentive and more focused, meaning that they are easier to train. English Labs too are very intelligent and possess high trainability.

The obedience training remains the same for both American Labs and English Labs. The personality of Chocolate Labs depends on both its environment and genetics.

The Bloodlines of Chocolate Labradors

The variation in trainability is due to the difference in the bloodlines of show-bred dogs and field bred dogs. This doesn’t have anything to do with the coat color.

Because many black Labs are American in type and many Chocolate Labradors are English in type, the traits of the show-bred dogs are more inclined towards brown Labradors.

If both dogs, brown and black are taken from the same bloodline, then you won’t see any difference in trainability among them.

The Labradors reproduced for the field were quicker and could focus better. The show-bred Labradors turned out bulkier and slower.

Still, both the bloodlines have more similarities than differences.

The Chocolate Labrador price lies in the low to medium range. So how much does a chocolate lab cost exactly?

While purchasing a Chocolate Lab puppy, you can expect the price to be between $800 and $1200.

When they reach the age of eight weeks, they get in a ready state to shift to a permanent home.

No Chocolate Lab should be sold prior to this age. If this is not followed somewhere, then you mustn’t buy the puppy there.

Ensure that you choose a reputable breeder to buy your dog from. Avoid buying puppies from pet stores and puppy mills at any cost.

If you are looking for a hunting-specific dog, go to a breeder who breeds field-bred dogs.

If you are looking for a show dog, go to a breeder who breeds specifically for show rings.

Health Issues in a Chocolate Lab

Just like any other dog, Chocolate Labradors too can suffer from genetic disorders. This is the reason to remain cautious of the dog’s parents’ health when you buy one.

Labrador Retrievers are prone to obesity problems and related illnesses.

The liver Labrador can suffer from hip or elbow dysplasia just like other Labs. These diseases affect the joints.

They are more susceptible to Progressive Retinal Atrophy, a vision impairment.

Lymphoma, a form of cancer can also affect Labradors. Other hereditary conditions are also likely to affect Labs.

Training and Exercise for the Chocolate Lab

Choose the exercise and training for your dog that is based on the bloodline from which your dog comes.

Next, undertake a positive reinforcement training program. Not only his body, but exercise his mind too.

To keep his energy going, he needs to be always kept at some work, such as a fetch game, finding toys, crossing streams, and so on.

You will experience fun in training him. If the chocolate Lab is from a show bloodline, he requires plenty of play along with exercise.

Caring for an old Chocolate Lab

The brown Labs, just like other Labs, are susceptible to problems that come with old age.

These problems include hearing loss, inflexibility in joints, and worsening eyesight.

Still, these age-related problems can be kept at bay if you make sure to keep your dog slim. If your Lab is fat, then you should be more careful about his weight.

If your Chocolate Lab has a high body weight, it can result in more stress and strain on joints. This can further lead to problems such as arthritis.

Even though the Chocolate Labrador will become more fragile in his senior age, his beauty will likely be maintained throughout his lifetime.

Why were Chocolate Labs considered to be Stupid?

Many are of the opinion that Chocolate Labrador Retrievers aren’t as famously intelligent and hard-working as the black and yellow Labs.

Some people say that they are unwilling to be trained, obstinate, or simply a bit stupid.

It is worth noting that the brown Labs were majorly popular for their unique color in dog shows.

A theory says that these Labs were specifically bred for their adherence to the standard, for their appearance, with little attention given to breeding them as working dogs.

They weren’t selectively bred to improve their working skills, which would have involved biddability and intelligence.

Another theory says that because the chocolate color had an abrupt rise in interest many years ago, some breeders focused on producing litters that contained brown Lab puppies for sale as pets.

With major focus on color, other attributes such as biddability and temperament were ignored and allowed to go unnoticed.

This selective breeding was most likely done by irresponsible breeders.

It is possible that Chocolate Labs, in general, possess a weak group of working genes, with temperament not well-suited to training and work, and probably lower skill in problem-solving than the yellow and black Labs.

We hope you enjoyed this fact-filled article on the sweet Chocolate Labs.

Explore Dog is World deeper for getting acquainted with dogs’ lives.

Why Do Dogs Eat Poop?