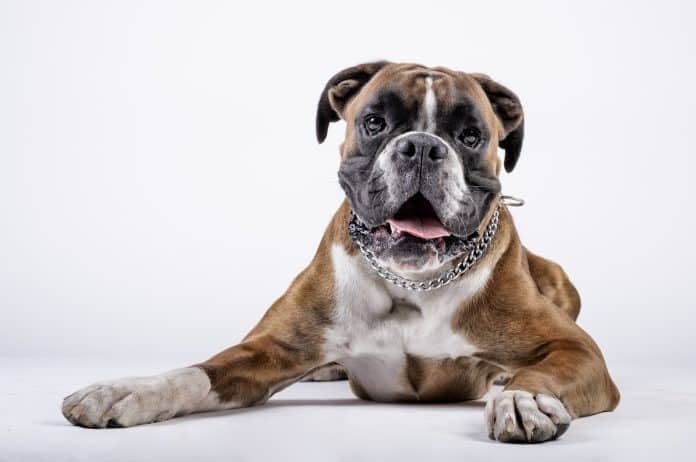 In this article, we will present some interesting facts on Boxer dogs . The Boxer is today’s one of the most famous dogs, especially in the United States.

Known for its qualities such as courage, loyalty, and cleverness, the Boxer has a muscular and a powerful body.

His face is square in shape, with the body possessing notably well-built muscles underneath the short coat.

The muzzle of the Boxer is unique and his lower jaw projects beyond the upper jaw. A trainable and friendly dog, he is loving and protective of his owner.

With a face that appears inquisitive and alert, the Boxer has a fairly well-sized body with a height of 23 – 25 inches and a weight between 65 and 80 pounds.

Females often weigh around 10 pounds lesser than males and are two inches shorter. With very little grooming needed for its short coat, the energetic Boxer requires regular exercise and space to play.

Certainly, the Boxers are naughty, energetic, and crave attention, but do you know that they shine in sports and many of them in the UK have been developed with a docked tail?

Boxers move in an elegant and an energetic manner, like a trained prizefighter. They have a rich historical background and are recognized for their noteworthy achievements.

If you haven’t yet become fond of Boxers, the upcoming exciting facts on Boxer Dogs will make you rethink. Even experienced Boxer owners will learn about a few things that they haven’t heard about.

The following section consists of 8 amazing facts on Boxer Dogs you probably didn’t know about:

The Boxers had two old cousins, the Mastiff and Bulldog. The ancestors of Boxers were the war dogs of the Assyrian empire, who were in operation as far back as 2500 B.C.

The ancestors were courageous and powerful dogs ideal for situations of war. After many subsequent centuries, these dogs had the name for the ancient city of Molossis, in present day Albania.

The Boxers were thought to have been bred down by German dog enthusiasts, from a bigger, and a bulkier breed known as Bullenbeisser.

For many centuries, the Bullenbeisser was utilized as a dog that hunted wild deer, bear, and boar. The breed gradually proliferated to more parts of Europe, including England.

Many experts are of the opinion that the small Bullenbeisser, the native of northeast Belgium, is the direct predecessor of the modern Boxer.

By crossing Bullenbeiser with a smaller, mastiff-type English breed, a new breed came into existence, known as the Boxer. It was a more elegant and sleeker dog.

The name Boxer refers to the way the breed makes the motion of boxing. It spars like a prizefighter with its front paws when defending itself.

The Boxer was first brought to the United States after World War I.

When talking about Boxers, four dogs come into the picture who were named as “The Four Horsemen of Boxerdom”. One of them was Sigurd, from Germany. Ten puppies of Sigurd became champions.

The next two dogs were Lustig and Utz, who also created many champions, 41 and 35 respectively.

Dorian was the last one. He won the Working Group award in 1937.

The Myth of the White Boxers

One cannot just not talk about the White Boxer myth when it comes to color facts on Boxer Dogs.

You won’t see white boxers often as it is not a standard color. One in four Boxer puppies is white in color.

The white color in Boxers is not a skin condition. Most Boxers have some colored spots on their coats.

However, due to their light coloring, they get sunburned easily.

It is not true that all white boxers are deaf. Still, the proportion is higher than other colored Boxers.

The Boxer is a tough one to train for agility and rally.

The Boxer races gloriously in agility courses, is great at performing in rally, and is good in obedience training.

This very clever dog can sometimes have his own way of doing things. As a trainer, you must be innovative, consistent, and tolerant.

The Boxer can become bored with redundant instructions and may create his own idea of agility or obedience during performance or training.

It is likely that you are already aware of these facts on Boxer dogs, but still, keep reading.

Despite their history of being hunting dogs, their most attractive quality is the love they have for their fellow humans and the necessity of getting loved.

A Boxer is especially fond of children and can be seen happiest when he is around them. Also, he is an ideal family dog and protective with kids.

Boxers come in three colors and have outshone the competition.

The Boxer is found in only either one of these three colors: white, fawn, and brindle. The color white is seen seldom and is not regarded as a standard color.

Remember that there is no black Boxer in the world. If you see someone speaking about a black Boxer, it’s actually a dark brindle.

The Boxer’s antics can sometimes be annoying.

When they welcome their beloved human, they get very excited and begin jumping up and down in cheerfulness.

You should make them learn the “down” command as a primary lesson. If you meet a Boxer breed enthusiast, they will talk about the peculiar “kidney bean” dance that they perform.

In this dance, they turn their bodies into a semicircular kind of way and, in their enthusiasm, start moving in a circular fashion.

Even though Boxers are not the first type of dogs who come to mind as service dogs, they are just as good as any German Shepherds, Collies, or Retrievers.

The Boxers can be taught the skill and can be engaged as autistic support animals, guide dogs for the blind, and for other services.

Their friendly manner, high intelligence, and trainability are the characteristics that help them to become good service dogs.

These are some of the things that make Boxers so unique and good quality family and service dogs.

Keep checking our website for more insights on dogs.

What Is Separation Anxiety In Dogs? 10 Ways To Cure It