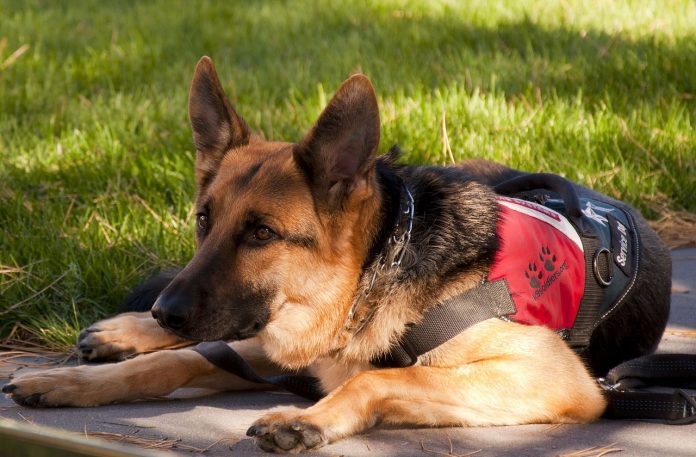 Ever since the rise of service dogs, they’re now becoming pillars for the physically and mentally challenged people around the globe.

It is astonishing how good they are with their jobs and with the way they are creating a major impact by providing the service.

Service dogs are dogs which are trained for a specific purpose, which is, to support people with disabilities such as visual impairment, hearing impairment, mental disorder, seizures, mobility impairment, and diabetes.

It goes without saying that why dogs are chosen for this particular task.

Nobody would assign herself to the responsibility of a differently-abled human being with the sort of compassion that dogs would.

What are Service Dogs? & Their History

It is time that people must be educated about service dogs, majority of the people are unaware that when they see a dog with a vest indicating ‘at work’, they are not allowed to pet them.

It is since 2009 that the first week of August is celebrated as International Assistance Dog Week, to give a tribute to these heroes who’ve been known to show immense companionship and usefulness to human beings from thousands of years.

In the early ages, dogs always lived on the outer periphery of human beings surviving on scrap food.

But it was eventually noticed that they would alert and notify people every time there was a threat incoming.

This feature is what gave rise to the human and dog relationship, and dogs began living with human beings as their pets helping them in hunting and both mutually looking after one another.

The history of service dogs goes to recent past, which is 1990 when the legal code of Americans with Disabilities Act defined a service dog as ‘any guide dog, a signal dog or other animal individually trained to provide assistance to a human with disability’.

Before 1990, service dogs had a vaguely defined job description known as a Seeing Eye dog, where they primarily assisted blind people for walks and daily chores.

From the late 1960s, dogs began to be properly trained and accepted for the role of a service dog by authorities and were finally legalized by 1990.

Ten Types of Service Dogs and Their Role

A guide dog’s role is similar to the torch that gives the vision to find the way.

A guide dog gives assistance to people with visual impairment and are the most commonly known service dogs ever since the early ages.

Labradors, Golden Retrievers, and Poodles are some of the breeds best suited for the role of guide dogs.

They don’t necessarily wear a vest, but you can recognize them by a special kind of harness on their bodies with handles.

Hearing dogs are the ones assigned to people with hearing impairment, by being a crucial helping hand for this particular purpose.

Whenever there is a stress signal and the human is supposed to respond to it, a hearing dog would notify it by touching the person and guiding them towards the source of that sound.

Labradors and Golden Retrievers are conventionally the most highly preferred for this job description.

But lately, Miniature Poodles and Cocker Spaniels being highly trainable are being recognized to be effective hearing dogs.

Dogs in this category are trained specifically for their alertness and activeness, they specialize in the art of performing various mobility activities which include:

American Staffordshire Terrier, Labradors, and Golden Retrievers are highly preferred for this particular task due to their high trainability and spontaneity.

Also known as DADs’, these dogs are making diabetic patients independent from worries.

As they are quick to grasp the hyperglycemic or hypoglycemic indexes in diabetic patients, due to their innate ability of olfaction when the changes tend to occur and which is imperceptible to human beings.

Most of these dogs are trained in a way that whenever they detect an issue, they indicate it to their human for a blood test.

In case of any medical support, they would also alert other people around with the help of a buzzer or an alarm.

Breed of dogs such as German Shepherds and Greyhounds are perfectly suited for this job description, as they can easily be trained for the specific task efficiently.

The possibility of dogs under this category is still under controversies.

Dogs under this category generally indicate the scope of an incoming seizure in her human with unique behavior.

Although, some neurology experts claim that there is no evidence on dogs being able to detect oncoming seizures.

But, a lot of media attention has been emphasized on dogs being able to predict the seizures by many dog owners and trainers.

German Shepherds, Samoyeds and Border Collies are the dog breeds that can be trained and would fit this particular category better.

Seizure response dogs are different from seizure alert dogs, these dogs have the tendency to bark or alert the people around whenever his human is going through an epileptic seizure.

Most of these dogs are also trained to rescue a person to a safe place whenever the human it is assigned to is having a seizure.

Rottweilers, Akita and Rough Collies are well regarded for their trainability to take immediate action whenever they sense unfavorable conditions.

Mental health issues are a rising concern in the 21st century, and these service dogs are making the lives of people suffering from depression, anxiety and mostly PTSD (Post-Traumatic Stress Disorder) better in every which way.

People with PTSD suffer from various unsettling thoughts and feelings after they’ve come out of a particularly traumatic event.

People with PTSD tend to be overly cautious and paranoid related to basic activities of their daily life.

The role of a dog assigned to such a human is that they infest the emotion of security within them by performing certain tasks like entering the house before the handler, creating a barrier between the human and people in overly crowded places.

Many Psychiatric Service Dogs also insist human beings look at the brighter side of life by forcing them to go out for a walk or getting them involved in a small playful session.

Dogs are generating groundbreaking outcomes for children who come under the autism spectrum.

They are creating a sense of predictability as children discover their social atmosphere, in school.

They’re also helping to fill the social gap of the autistic child with his classmates, as the dog acts like a common-ground for the kids to bond.

These dogs are trained in order to keep the child away from isolation, comforting them during stressful times and also avoiding the chances for the child to get lost.

This is a new emerging section of dogs, who are trained especially for children who’ve been exposed to alcohol prenatally and have been diagnosed with Fetal Alcohol Spectrum Disorders.

Children with FASD suffer from physical and mental disabilities and also struggle with the ability to learn certain basic things.

FASD Service Dogs play a major role by interrupting the child when stuck in an endless loop of repetitive behavior.

There’s a new category of dogs where dogs are being observed putting in their olfactory skills to greater advantages, which is detecting potential allergic sources like peanuts or gluten.

With the help of Allergy Detection Dogs, parents can feel more secure as they can detect allergy-inducing sources and alert the children, giving them a sense of independence.

German Shepherds and Miniature Dachshunds are amazing for this particular job, as they can scent even the slightest of incoming threats.

How are Service Dogs Changing Lives?

Life is challenging for people who are differently-abled, they are hinged to dependency over someone; which is mentally unsettling for both the parties.

Service dogs are changing the lives of such people by giving them a level of independence and freedom for their day-to-day activities.

The best part about service dogs is that they are doing their duty with all the warmth and love they have in their heart for the human and not feeling burdened by the responsibility.

On the other hand, it a moment of joy for the human to find a dog being there for her human all the time, it boosts morale and makes their life better.

I just want to share stories of some of our heroes, and the way they are changing lives.

Shanna Niehaus from the U.S. has a young son, who is suffering from autism and it could be understood only by them how heart-wrenching this condition can be.

Shanna had difficulties with touching her own child and it was a constant struggle to make her kid go through the daily activities like dressing, bathing and even hugging.

But Tornado, who is a Golden Retriever got the family the long-lost hope, that they had begun losing.

Tornado brought considerable improvement in her young son, which was more than what anyone would expect.

Shanna went on to say that ‘until they have Tornado, things will eventually be good.’

Marine Dan Lasko, had returned from deadly combat overseas which made him lose one of his legs in the battle and also made him suffer from PTSD (Post Traumatic Stress Disorder) – which is also a condition which doesn’t leave people for a lifetime.

Flashback of past traumatic events usually triggers fear, anxiety, anger and a strand of other emotions that makes life quite different from normal.

After being introduced to Wally, the bars of struggle in life started falling down for Lasko.

Wally would often help Lasko train balancing, due to his prosthetic legs.

Raider is a German Shepherd is a service dog and the life-changing companion of the marine veteran Chris Galliher.

Chris often says that Raider was the light at the end of the tunnel that showed up after he had spent a long time walking in the dark.

Raider is quick to judge when Chris gets anxious and irritable and often snuggles with Chris in order to make him feel that he’s got his back and everything is okay.

PTSD is a condition where it gets difficult for an individual to engage with anyone and get involved in regular life space at all and during such a time Raider has influenced Chris with his love and affection to stand tall face life the way it comes.

The special quality about dogs is that they make us feel loved, even when they cannot say it and somewhere it is the purest form of ‘love’ that can ever exist.

Service dogs are changing the lives of hundreds and thousands of people around the globe, not by saying how much they care but by merely acting on it every single day.

Do you have any story to share of a service dog and how they’re changing lives?

Kindly, drop a comment on what you think about service dogs.

Share the link with your friends and make people aware about these silent protectors.

Your engagement with us is valuable, thank you!

How To Train A Service Dog?

Dog-Friendly Beaches In The US: Amenities, Timings, Location & A Lot...