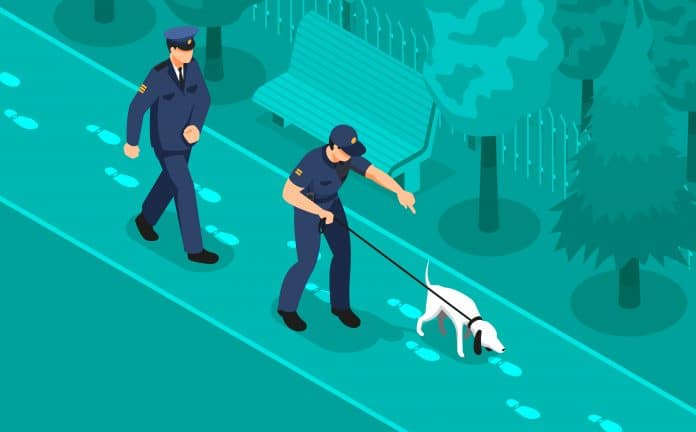 In this article, we are discussing the 10 Best Police Dogs those dog breeds that assist the police and military services.

Police personals require smart, active, and controllable dogs for tasks that cannot be performed by humans.

These service dogs are excellently trained to communicate with its officer when to lead a suspicious inspection.

Police dogs in training need to prove their worth by showing extraordinary skills relevant to the police needs.

What Do Police Dogs Do?

Police dogs are smart and sense things that can be helpful for the detection of harmful or illegal substances.

This is a reason why they are also termed as Detection dogs.

Attack dogs are generally aggressive dog breeds that are used to locate and scare criminals.

These dogs belong to a different detection dog group and will not be used to perform any other tasks.

Patrol dogs are known for possessing the skill and performing dual purposes at a given time.

They are known as dual-purpose dogs and can detect as well as target an illegal commodity at the same time.

These dogs are used to rescue things or people from emergencies.

Their odor sensibility is put into use to search and signal the officer for suspicious things.

A police dog may retire if found to be extremely sick, injured without recovery or old enough who cannot function normally.

The average working life of a police dog is 6-9 years of age.

German shepherds are the most preferred dog breed for police dog corresponding to its features like being highly trainable and obedient.

It is the Best Police Dog out there!

A German shepherd would give its life saving yours; such is the loyalty of the breed.

Get complete dog breed information about German shepherd to know more about its trainability.

The Belgian Malinois dogs are agile and said to be the best working dogs that have helped the police and military services detect narcotics and explosive items at the time of inspection.

They have earned the honor of guarding the prestigious White House in the United States of America.

They hold the 2nd rank on the list of Best Police Dogs.

Bullmastiffs are natural chasers that welcome them to the family of police dogs.

They are strong dogs who can guard people against danger.

Police dogs need to be strong and powerful to attack or protect during tasks.

This need is completely full-filled by the Bullmastiff.

One of the most dangerous of the police dog breeds; Rottweilers have an image of an aggressive dog that is meant to attack people.

This is one positive sign that has been helpful to the policemen.

Know more about this giant dog in the complete Rottweiler breed information.

Popularly known as the dog kind’s nobleman, Doberman pinscher is a large full-sized dog with the best of the protection ability.

Their smartness can be rightly directed and used for defense purposes.

They have obtained smartness and quickness from its ancestral pedigree.

They are known to be one of the best police dogs in action.

Police officials use them as detection dogs.

Talking about the police dogs, how can we neglect the solidly built Boxer who by its large size and defensive nature has impressed many organizations to use it as a service dog?

Boxers are strong and smart in the list of police breeds.

Bloodhound is also one of the Best Police Dogs when it comes to sniffing, it is a large-sized breed famous for the remarkable ability to smell various odors.

They can follow a particular smell for distances and police departments use this skill of theirs to suspect locations.

Bloodhounds are common participants as search and rescue dogs.

Also known as police k9 (canine) Labrador retrievers would catch your eyes at the airport security check or the police investigation areas.

Labs are one of the most energetic breeds.

Give a task and see it being done by them.

They have helped the cops with medical alerts and detection jobs to name a few.

Know more about this loving dog in the complete Labrador breed information.

Fastidious and the gun breed, German short-haired pointer is a speedy hunting dog, known to be the fastest police dogs in action.

They are excellent in water as well as land.

Their running skills are useful to the police officers to utilize them as chasers.

Living a life of a police dog does not necessarily mean they have a longer lifespan to that of others.

On average, a police dog survives 6-9 years of its working life.

However, training and strength building can make police dogs ready for war.

Naming dogs at the police departments is essential for commanding and ordering purposes.

Every dog is given a unique name that would differentiate it from the other.

Their high demand leads to a high price in the market.

Dual-purpose dogs for patrolling and narcotics are more expensive to the range of 8,000-10,000 dollars.

In a brave incident in Mississippi, a police dog saved the life of his police officer who was attacked by 3 unidentified persons on his patrol duty.

The deputy casually approached a car where the person seated in appeared unconscious.

Two men attacked the deputy officer from behind and assaulted him along with the driver.

They hit him and dragged the officer into the woods where he was warned of getting stabbed.

The officer somehow managed to get hold of the button on his keys that would release his canine from the patrol car.

As soon as the police dog was released, he ran inaction towards the three men and attacked them bravely.

This fight led to the ligament tear of the dog along with several teeth on the ground. The attackers fled the scene.

This profound incident gave the dog named Lucas the prestigious ‘Hero of the year’ award by Hancock County Sheriff’s Department for his valiant efforts.

While chasing a robbery criminal, a German shepherd was attacked with a 10-inch knife in his lung along with his police officer partner who was saved by the dog on being attacked.

The brave dog had to undergo a surgery for taking the pain saving his master.

The dog was awarded a prestigious bravery award along with a PDSA gold medal–the highest award for civilian animal bravery.

Let us know more about any of your experiences with police dogs.

We would love to hear from you in the comments section below.

Happy Petting To You!

All About Dog Games: Tug of War, Frisbee, Fetch, and Brain...

ABOUT US
We look forward to support every dog parent with some useful and quality content to be better able to understand and take care of the unspoken animal’s problems.
Contact us: contactdogisworld@gmail.com
FOLLOW US
© Dog Is World by PortraitFlip
MORE STORIES

Puli: The Most Strange Yet Cute Dog!