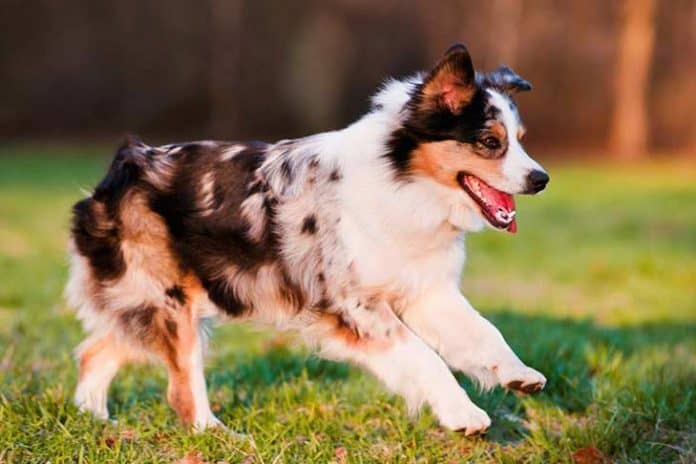 This breed’s intelligence, loyalty, and size make them an excellent travel companion.”

They are happy to be on a farm looking for livestock or as a companion dog in the cities.

This dog is sensitive than the other breeds.

Soft punishment affects them emotionally and also are average watchdogs.

Due to the wide variation in the color of mini Aussies’ coats and eyes, the breed was destined for success on social media.

Miniature American Shepherds have a higher impulse to chase and catch something than other dog breeds.

Females stand between 13 and 17 inches at the shoulder whereas males range from 14 to 18 inches.

This breed isn’t considered as an aloof dog.

Miniature American Shepherds are not the best choice for an apartment lifestyle, but they don’t mind being inside if you walk them several times every day.

He is small enough to enjoy homes with smaller yards and also tenacious enough to still work on a farm.

Animals that have been acclimated to colder weather can definitely tolerate more extremes.

This breed being a little smaller in size and not acclimated to the colder weather; he’d most likely not tolerate as cold as others.

These dogs do well in both heat and cold due to their double coat that acts as a perfect insulator.

They have a nifty double coat that insulates them against both cold and heat.

They can remain comfortable in warm climates.

This breed could be a good choice if you’re looking for a quiet breed.

This breed of dogs is average friendly towards other dogs.

This breed was bred to herd. So they require lots of exercise, whether it’s a good run, indoor games, or playing fetch.

Activities that combine mental and physical stimulation and exercise would be best for this smart, agile breed.

They enjoy outings with their people they know that will occupy both their mind and body, also enjoy and excel in many canine events, including obedience, agility, and tracking.

Weekly brushing—daily during shedding season—will help to remove dirt and loose hairs and keep the dog looking his best.

Mats or tangles can be worked out with a slicker brush or metal comb.

The nails should be trimmed regularly, as overly long nails can cause the dog discomfort.

The Miniature American Shepherd is a playful dog breed.

Excited barking and at times nipping will alert you to play.

The breed is highly intelligent and hence very easy to train.

He was bred to be a farm dog and hence posses characteristics of high trainability.

Miniature American Shepherds have a higher than average tendency to nip, chew, play-bite, or herd people.

It’s common in puppies, don’t confuse it as aggression.

These “bites” don’t hurt, but Miniature American Shepherds need to be taught for a good attitude.

If you choose to purchase the Miniature American Shepherd, you should know that the mentioned amount of money is an average.

Miniature American Shepherds can be wary of strangers, so training and socialization help.

As they were bred to be herding or a farm dog, they may start following your children or the parents sometimes.

Miniature American and Australian shepherds are the same things, and many people refer to them interchangeably.

Mini American shepherds first appeared on the AKC’s annual “Most Popular Breeds” list in 2016; they were number 34 in 2018.

These shepherds may have different colors on them don’t worry if you some multiple colors, read the AKC Breeding Standard to get a grasp of all the possible combinations.

Where Miniature American Shepherd Came From?

In the 1960s, small-sized Australian Shepherds found working the U.S. rodeo circuit were selectively bred to reduce their size further.

The new breed was originally named the Miniature Australian Shepherd.

The Miniature American Shepherd Club of the USA, Inc. was formed back in 1990.

This breed has been recorded in the Foundation Stock Service since 2011.

They are also referred to as Mini Aussies.

The Miniature American Shepherd is a small size herding dog that originated way back in the United States.

Despite their size, they are highly energetic, versatile, rugged, and extremely bright.

Intelligent and willing to please, they are highly trainable and will reach his best potential as a companion when taught at least basic obedience.

They easily find out the association between commands and actions.

The Miniature American Shepherd has a double coat, with a longer outer coat and wooly undercoat.

This dog sheds a fair amount, even more so during the shedding season, which can occur once or twice a year.

Some dogs may face these health challenges in their lives, but the majority of Miniature American Shepherds are healthy dogs.

Although the merle coat coloration is beautiful, the gene for it can also sometimes carry a blind/deaf factor.

One drawback of miniaturization of a breed is that it increases the potential occurrence of some other health problems.

Sometimes twisted legs and Hip Dysplasia which is a congenital (inherited) condition, which means that it is passed down from the parents to the offspring.

This disease affects the hip joint – this is the point the hind leg connects to the body via a ball and socket joint.

There are many causes of seizures.

Idiopathic Epilepsy is the most common cause of seizure attacks in the dog and is also an inherited disorder.

Degenerative myelopathy refers to the disease, which is an incurable, progressive disease of the dog’s spinal cord or bone marrow and it is also similar to amyotrophic lateral sclerosis (ALS).

Prognosis of this disease is negative, as it is the degeneration of the animal’s spinal cord, leading to loss of numerous bodily functions.

A Cataract is an opacity in the lens of a dog’s eye, which causes him to have blurry vision.

Collie eye anomaly (CEA) is a congenital, bilateral, inherited eye disease of dogs, which affects the retina, choroid, and sclera.

It can either be a mild disease or cause blindness.

Hypoallergenic is a common issue among this breed of dogs.

Some herding breed of dogs carry an MDR1 gene which makes them sensitive to certain drugs that are otherwise okay to give another dog, but if tested positive for this gene can kill them.

These dogs generally do well on high-quality dog food.

Any diet should be appropriate if given according to the dog’s age (puppy, adult, or senior).

1 to 1.5 cups of high-quality dry dog food at least divided into two meals a day.

Regular visits to the vet for checkups and parasite control help to ensure the dog a long, healthy life.

Read our Guide To Dog Vaccination to have an in-depth idea of how to prevent your dog from infections.

They are active and athletic, and they need a moderate amount of exercise but are also very adaptable to their family’s way of life.

It’s a natural process of the hair growth cycle.

Regular brushing reduces the amount of hair that sheds.

It is vital to feed your dog a high-quality dog food and healthy dog treats.

Dog food expenses vary based on the size and energy level of your dog as well as the quality of the food given to them.

A routine veterinary visit is a huge part of keeping your dog healthy.

This breed will be a good choice if you have children.

These dogs are loyal and affectionate, and they get along well with active children and families.

If you expose them to other dogs, people, and social environments early on, there’s a better chance they’ll be more of a socialite.

Bred in California in the 1960s, this small herding dog is a versatile, intelligent, and enthusiastic dog.

They have a wide variation in the color of their eyes, which can be mismatched or marbled in shades of bright blue, brown, and hazel; and mottled coats, which can be blue-gray, red, black, or white.

As the visibility and demand of mini Aussies have grown, those people have realized that they can get a 15-pound version of the same animal instead.

Though the AKC distinguishes between Australian shepherds and mini American shepherds, standard, miniature, and toy Aussies are varieties of the same kind of dog.

One litter can include siblings of different sizes, and you could get a full-size Aussie from two minis.

Something Fun About Miniature American Shepherd

Let me tell you a fun fact about

He is often perceived as a Shetland Sheepdog but once you see the dog’s characteristics you never ever forget him.

How Dog Nutrition Affects Every Part of their Health!