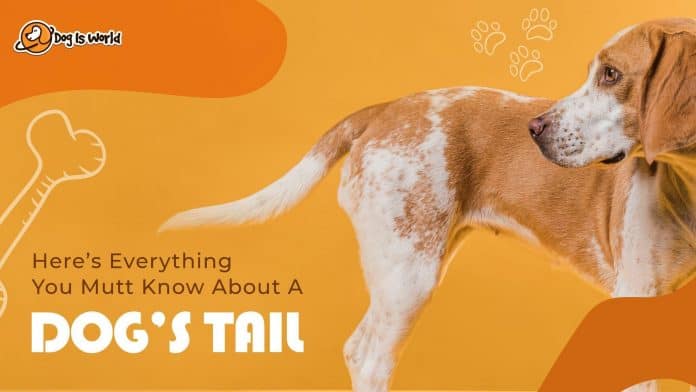 Don’t you ever wish you could talk to your dog?

Sadly, we cannot do so at this point in time; however, we hope to be able to do so in the near future since anything is possible.

But don’t get disheartened just yet!!

Here’s the catch: you don’t need a machine or a magic potion, you can be the next Disney character simply by reading this article.

And the magic trick is: You can simply do so by understanding a dog’s tail.

You can understand certain things about a dog’s body language and the things he wants to say through the wagging and position of the tail.

A dog’s tail is one of the most significant components of its anatomy. What a mouth is to a human, a tail is to a dog.

To put it another way, they communicate with other dogs by wagging their tails. It also has a role for humans; the posture of the tail indicates how the pet is feeling.

The location, direction, and speed with which a dog’s tail wags also can reveal information about the dog’s mood and goals.

Depending on whether it is high or low, the wagging tail can imply different things.

A dog’s tail isn’t just an accessory, but an important part of the body.

The tail of a dog serves three main purposes:  for stability in the body, to communicate, and to move —call it a dog’s tail language.

When we think “wagging tail”, it is easy to presume that it implies the dog is “happy,” but that is not always the case. A dog’s tail wagging can mean a lot of different things.

Just like a human’s facial expression can have a different meaning, so does the wagging of a dog’s tail. As mentioned before, it serves as a mode for communication —a dog tail language that is spoken between dogs.

Dogs communicate with body language and also by taking certain stances like moving their ears or wagging their tails.

Simply assuming that a dog’s tail is up when he’s happy and down when he’s unhappy isn’t enough; learning more about the stances of a dog’s tail position will help you understand your pet dog and even act as a way for him to communicate with you.

So the movements of the tail play an important role in socializing and signaling.

The wagging of the tail assumes substantial interpretation when the dog moves it. The wag’s speed reveals the dog’s level of excitement.

The speed of each tail wagging tells whether the dog is in a good or bad emotional state.

Here is how you can decipher the behavior of your pet by looking at their wagging tail:

Not only does a dog’s tail wagging convey what the dog is feeling, but the position of the tail also indicates the emotion of the dog.

Now that we’ve covered everything that we mutt knows about the dog’s tail wagging and stance, let’s move on to the health concerns such as why a dog’s tail is between the legs or facing downward.

Ever wondered why some dog’s tail is always down?

A dog tail not wagging is called a limber tail syndrome, and is also known as an “Acute Caudal Myopathy” or a “broken tail”. It is a medical condition that occurs when a tail muscle has been injured.

When your pet has a limber tail, the tail is usually limp and there is soreness at the base of the tail.

This can occur when your pet has been too “active” by overworking the tail, an example of this would be swimming.

It is also a common occurrence among the large sporting breeds of dogs such as Labradors, Foxhounds, Beagles, and English Pointers.

Allowing your dog to rest its tail is the recommended remedy, and you can also use nonsteroidal anti-inflammatory medicines to lighten the pain.

Your pet is vulnerable to a variety of skin infections, caused by fleabites and dog bites.

They have a tendency for chewing, biting, and itching their own tails, which can lead to open skin dog tail infections and rashes if not properly treated as the tail has relatively little skin in comparison to the rest of the body.

Treating it can also be a hassle because the tail is a constantly moving part of the body making it difficult to treat.

You can also use topical treatments, although these can be difficult to apply because the dog may want to lick it more, causing it to be ingested.

To avoid this you can make your pet use an Elizabethan collar.

Oral antibiotics are the best option to manage all of these health issues.

A dog tail injury can lead to a fractured tail which can occur due to accidents, such as a car driving over the tail or accidentally someone stepping on the tail.

A broken tail can recover on its own or lead to partial amputation in some situations.

In such circumstances, you can also make your pet wear an Elizabethan collar so that he does not ingest the topical anesthetic.

In dogs, degeneration, and enlargement of the intervertebral disc cause pressure on the spinal cord and spinal nerve.

So when your pet’s tail appears to be lifeless, it could be a sign of nerve injury caused by accidents or chronic disk diseases.

A dog tail injury can also be caused by indirect accidents because the tail is directly attached to the nerve, a lifeless and limp dog tail can indicate nerve damage.

In such circumstances, physical therapy, pain medication, and plenty of rest may be prescribed, as well as ensuring that he lives pain-free and comfortably.

Docking or “Bobbing” is the removal of a dog’s tail with surgical scissors as an elective procedure.

Mutilating a body part of the dog can cause an extreme effect on their social life in the future. Docking a dog’s tail is normally done when a dog is still a puppy as the tail is soft.

When a dog tail docking procedure is performed, it can also cause complications like dog tail bleeding or a dog tail infection.

As mentioned above, the tail is an important part of the communication process, let’s call it “dog tail language.”

The tail is used for socializing and indicating the emotion of a dog, so cutting such an important part of the body is not only cruel but inhumane.

Docking is primarily done to improve the appearance of the dog and is also thought to keep them more lively.

Dog tail docking can result in unneeded and unwanted long-term chronic discomfort and suffering for the dog and such an act should be banned.

Are Tailless Dogs Able To Communicate?

The tail of a dog is just as important as the eye, it is used for communicating with other dogs as well as indicating what the dog is feeling emotionally.

Dogs have a form of communication depending on the position and motion of their tails. It also shows its emotional state.

The position of the dog’s tail whether it is ducked, curled or straight can convey a message.

Tailless dogs can have trouble communicating with other dogs as well as humans as the communication is limited and impacts the number of messages they might want to send.

According to a recent study titled “Behavioral responses of Canis familiaris to varying tail lengths of a remotely-controlled life-sized dog replica,” dogs with shorter tails were approached more warily than dogs with longer tails due to a lack of social norms provided by tails.

Now that you know about the various types of dog tails and what different dog tail positions mean, let’s move on to other things

Have you ever wondered why your dog is growling and wagging its tail at the same time?

A dog tail wagging signals more than just whether your dog is happy or sad; it also conveys messages to other canines as well as to you. When reading your dog’s posture and position, it’s also important to consider the dog’s growl.

Yes, different breeds of dogs have different types of tails. No surprise there. Dog tails also have a  distinct look that can help differentiate one from the other.

The Different Types Of Dog Tails:

Also called a nub tail, this type of tail is almost nonexistent and very tiny, and short, and has no tail structure. Such a type of tail is caused by a gene mutation. Eg Boston Terrier,  Olde English sheepdogs.

A dog tail curled and twisted that resembles a corkscrew.  Bulldogs and Pugs are two examples.

A docked tail looks similar to a bobbed tail, however, this tail was surgically removed and was not caused by genetics. This is prevalent in working and show dogs for cosmetic reasons.

This style of the tail is usually thick with a white “tuft” at the base and is horizontal with a small bend.

These tails, sometimes known as swimmer tails, are spherical and thick and tip downwards, forming a c-shaped structure. Labrador retrievers, otterhounds, and other sporting dogs are examples.

A saber tail is often long and carried low to the ground, and it is most commonly observed in dogs that were once used as herders. Eg German shepherd

This type of tail is curved upward towards the body of the dog that looks like a sickle. It is usually seen in dogs that live in colder regions which helps them stay warm.  Eg Shiba Inu, Siberian Husky, and Akita.

Now that we’ve covered everything there is to know about a dog’s tail, we can see why it’s such a vital aspect of a dog’s anatomy.

We know that dogs communicate with one another by using their tails, similar to how dolphins use echolocation and people use verbal and vocal communications.

Given that,  I hope this post will help you in better understanding and communicating with your pet.

Are Tailless Dogs Able To Communicate?

Yes, tailless dogs can communicate, but only to a limited level, because dogs use their tails to communicate. Canines without tails may find it difficult to communicate with other dogs because of the limited number of messages they can convey.

What is a dog's tail made of?

Why does a dog's tail wag?

The tail of a dog wags because it is used to send and receive messages. The pace with which each tail wags indicates whether the dog is in a happy or sad mood. It's a way for dogs to communicate with one another.

The tail is made up of a number of tiny bones and muscles that attach to the vertebrae and assist control the tail's cognitive movements and play a very important role in the communication between dogs.

What does it mean if a dog's tail is down?

If your pet's tail is facing down, it may be indicating that they are yielding to whoever is in front of them. In the animal kingdom, it's a common occurrence. However, if it lasts for a long time, it could be a sign of a health problem and should be addressed to the vet.

Don’t forget to save this article for future reference.

Happy petting to all

We also have socials that we update regularly!!

Can Dogs Eat Guava? Here’s why Guava is the Best Fruit...