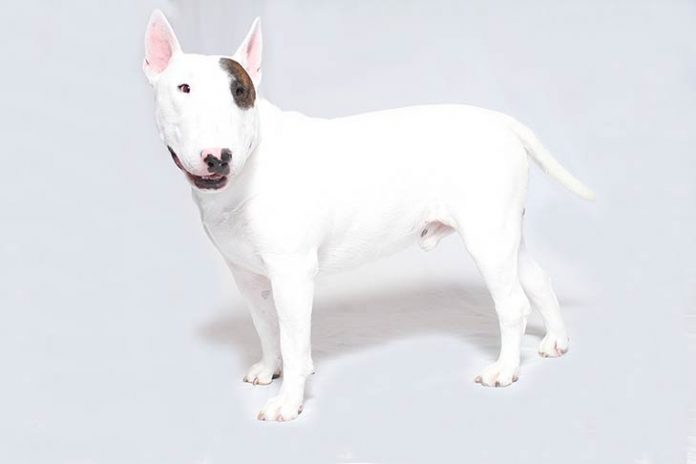 If dogs were to be categorized as introverts and extroverts, a Bull Terrier definitely is naturally extroverted by its genes.

Their physical appearance is quite robust and muscular, and the shape of their face would resemble the oval shape of eggs.

It’s as if there is no separation between their beak and skull, the skull starts and curves downwards to form the beak which often gives an overall look as shark-shaped.

The shape of their eyes is triangular, which makes their eyes appear smaller in comparison to their football-shaped face.

They’re the only breed who have triangular shaped eyes.

They are highly agile and dynamic by nature.

Every time you’d spot something interesting going on somewhere, chances are that a Bull Terrier is a part of it.

If there’s a slot for a perfect family member, Bull Terriers are the most suitable for that slot.

Bull Terriers belonging to the terrier family ace in the aspect of size, a standard fully-grown Bull Terrier’s height ranges between 21 to 22 inches and have very robust and muscular anterior and posterior.

In the early ages, Bull Terriers were typically for fighting.

As time passed by, they determined the fashion quotient of well-off people as their companion, but now they’re much more of a family dog and show deeper traits of sensitivity and connectedness with family members, making it a complete package of a family dog.

Keeping in consideration their size, accommodating them in an apartment would require planning for the space they’re going to occupy, which makes them a better choice for people living in a bungalow and having a joint family.

But nevertheless, with their innate affection level, they can still be a great choice for apartments.

A Bull Terrier, is more known as indoor dogs with thin coat they’re easier to groom but on the other hand, it makes them vulnerable to cold weather, it is tougher for them to sustain winters without an appropriate sweater or jacket for chilly walks.

Since they have thinner coats and lesser body fat they’re far from the issue of intensive body heating.

But still, excessive physical exhaustion and exercising are not highly recommended for them.

This breed of dogs is generally not known as excessive barkers.

But still, a lot of it also depends on the individuality of a particular Bull Terrier.

Mostly, during the first six months after they’re born, they tend to bark to notify activities outside the door and some unusual activities indoors – with time as they mature, you’ll hardly ever hear them.

Bull terriers are naturally not very good with cats, but if they’re being actively socialized with different animals and also dogs from their puppyhood, they tend to easily bond with them at later stages of their lives.

But a homesick Bull Terrier tends to be aggressive and defensive with other animals and even dogs, due to lack of social skills.

They normally bond better with dogs of their own sex and tend to pounce on others.

Involving them in social activities ever since they’re puppies makes them easy-to-mingle with other dogs.

If you own a bull terrier, considering regular walks just won’t be enough for it.

Involving them in swimming, fetching balls or Frisbees, running, playing with other dogs is what they’d love doing.

Occasional brushing, bathing and nail clipping is what would work sufficient for them.

These football faced creatures are quiet, but very active whenever the deal is about doing something fun.

They’re extroverts and are always up for an entertaining activity like a game of fetching the disc or swimming or just running down the roads.

A typical bull terrier is a lousy trainee, they tend to be stubborn and it’s difficult to make them follow commands because they have the want to be more dominating.

But if they’re treated well and habituated from their puppy stage – they tend to be the most obedient ones.

They are highly intelligent, and hence they shouldn’t be left alone at home for too long.

They tend to destruct the household if bored which is also their way to stay mentally stimulated.

You have to tire them physically with 60 – 90 minutes walk and high-performance activities, in order to stay at a mental advantage above them.

Bull Terriers are intelligent dogs and constantly seek the attention of their family members.

Bull Terrier puppies tend to be very mouthy, but if they’re trained to understand that it’s okay to be mouthy, but there are toys for that.

Their Mouthiness can be controlled.

The actual price of owning a dog is not just the purchasing cost, but the other expenses incurred as well throughout their lifetime.

The Staffordshire bull terrier ranks 18th in the article written by Las Vegas Review-Journal about ‘30 most expensive dogs to have’ with an average price of $1500 USD being that of a Bull Terrier.

This breed is often also encountered with many health-related issues, which also brings them in the category of high maintenance dogs.

Bull Terriers are the highly extroverted clown-character dog breed, with their egg-shaped face they are a complete package of unlimited fun and easily bond themselves with people.

These dogs are quite iconic all around the globe and are great attention-seekers.

There are generally found in two sizes: standard and miniature and are well renowned for their high intelligence level and need constant attention to keep their mind stimulated.

Being a family dog, it is not recommended to leave them alone at home for long hours or they’d fidget around and devastate various household equipment out of boredom.

D. Where Bull Terriers Originate From?

Back in the 19th century, Bull and Terriers two different breeds and were kept for the purpose of chasing and hunting vermin (small animals that destroy farm fields).

The Terriers in early times, with their innate speed and agility, were bred with Bulldogs, which gave rise to ‘Bull Terriers’.

The motive wasn’t the appearance, but the combination of their skills.

It was believed the breeding bulls with terriers would result in completely enhanced fighting skills in one, which gave rise to their egg-shaped or shark-shaped faces.

In the 19th century, James Hinks bred bulls and terriers with English White Terriers for the smoother and cleaner body type, with better face and legs.

Apart from that, Bull Terriers are pretty robust and muscular as they grow up since they were built for fighting.

This breed is known to be highly intelligent and is stubborn and dominant with the owners.

You can’t easily get them to follow your commands, making it difficult for the inexperienced dog owners.

During their puppyhood, a minimum 10 – 15 walk is necessary to get them acquainted with the surroundings and the people around.

Coming towards their adulthood, they need higher training hours than most breeds comparatively.

Having higher brain functioning, they need more training in order to keep their brain stimulated, a minimum 60 – 90 minutes training is important accompanied with frequent activities like fetching the disk, or swimming or sprints.

Bull Terriers are the easiest to groom, although they shed throughout the year even in winters.

They just need occasional brushing and bathing which makes them good to go.

They must be checked on a frequent basis for any skin related problems and once in a month clipping of their nails is all it takes to keep them well groomed.

They are prone to Patella Luxation, which makes a groove to form at the knee joint which disables it to hold the patella and slides out to the other side.

A high percentage of Bull Terriers are vulnerable to this condition, so it is not recommended for them to be obese.

Deafness has been a major health problem for Bull Terriers ever since their inception.

It is found that more than 18% of bull terriers are born with incompetent hearing ability.

This can be due to the fact that in early times, breeders bred bulls with English White Terriers with hearing impairment, but it’s not only prominent in White Bull Terriers but also the colored ones.

Bull Terriers are also open to the chances of skin abnormalities which can be as basic as itchiness, rashes, and spots.

But excessive symptoms must be consulted as leaving skin problems untreated may lead them to have ‘rhino skin’ very hard skin.

So, frequent check-ups of skin must be scheduled in order to detect any skin related issue.

Bull Terriers are also prone to heart-related issues where the heart valves might not close properly, and also narrowing of arteries.

You can figure out the problem if you find your bull terrier struggling with shortness of breath or prolonged inactivity.

A majority of Bull Terriers are also proclaimed to have higher risks of kidney failures.

They’re more prone to it during their late stages and the outcomes are usually fatal.

There is only little that can be done, veterinary diets can help the animal for a more prolonged living if any kidney disorder is spotted earlier.

Since Bull Terrier is fighter dogs, they need a good feeding routine from their puppyhood to build them up to adults they’re supposed to be – strong, muscular and dominant.

During their puppyhood, the diet should be either liquid or semi-liquid 2 – 3 times a day, during their mouthing period bones can be provided to them considering Bull Terrier have strong jaws and they can easily chew up the bone.

Meat can be given to them on a weekly basis and they love salmon, so it’s fine to give them Salmon every once in two weeks.

In order to protect your Bull Terrier from any disease before it infects is the standard way – you must vaccinate Bull Terrier puppies at the age of 6, 10 and 14 months to prime them with antibodies and neutralize infectious organisms.

Yearly vaccinations must be scheduled for your Dachshunds for DHPP and Rabies, and a monthly check up and consultation is mandatory for wire-haired and long-haired Dachshunds in case of any parasite or ticks infestation.

Getting the dog at your home alone will cost you $500 – $4000 USD depending on the quality of breeding.

Yearly vaccinations, grooming, and other pet care activities would cost you between $150 – $1000 USD.

Since Bull Terrier lives only up to 11 – 15 years they go through various cumbersome health issues which would cost you a minimum $1000 – $5000 USD.

The chances of a Bull Terrier mingling on with a cat while walking on the road randomly someday are less.

Although, if a Bull Terrier is raised with a cat from its puppyhood they can be the most comforting and reliable companions.

Socializing is a key activity during the early stages of the animal, otherwise, there is a probability of your Bull Terrier being aggressive towards other dogs and animals as well.

Bull Terriers are amazing family dogs and are very compassionate towards their family members, this fun-loving creature is kids’ best friend.

Since, it is a tough breed, proper precautions are essential around children.

A Bull Terrier is one of its kind with a funny and humorous way of living.

They are stocky and muscular and make great watchdogs and police dogs due to their fighting abilities.

They are the most affectionate family dogs and tend to take up space, so they are more suitable for people with joint families and a big lawn area for them to run around and be playful.

Having attention-seeking tendencies Bull Terriers are an amazing source of entertainment throughout the day.

So that was us about the Bull Terrier, tell us what you think about the breed or something related to your pet in the comment section below.

Do share it with people who have this dog or who want to get this breed!

ABOUT US
We look forward to support every dog parent with some useful and quality content to be better able to understand and take care of the unspoken animal’s problems.
Contact us: portraitflip@gmail.com
FOLLOW US
© Dog Is World by PortraitFlip
MORE STORIES