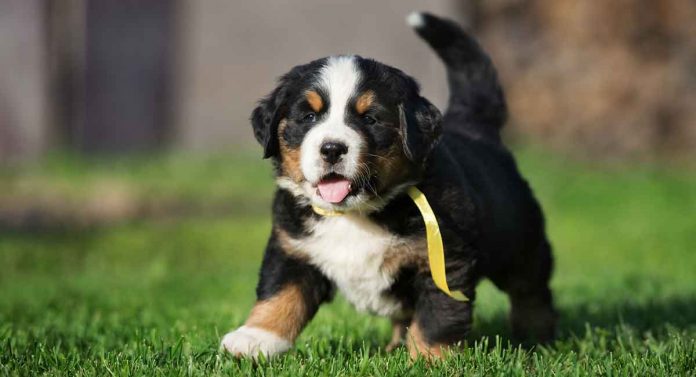 The Bernese Mountain dogs are large-sized breeds and were originated from the Swiss Alps.

In the early ages, they were generally farm dogs but were also used for heavy work like pulling carts and retrieving.

Being larger in size they stand as tall as 27 inches to shoulders and are avid hard-workers.

They are also very well behaved and calm in nature.

Being in the larger category of breeds, they don’t live for more than 10 years.

They are moderately coated with hair and are tricolored.

These dogs are very well behaved and gentle in nature, which also makes them highly affectionate and loyal companion dogs.

In early ages, they were a major helping hand to farmers in pulling carts and various farming activities, but now they’re equally good as family dogs.

Bernese Mountain Dogs are very huge and heavy which makes them unsuitable for apartment-sized living.

As they require regular grooming and they shed a lot as well, it will be quite a challenge to manage all the hassle.

Being originated in a cold-weather area, they handle cold weather really well and don’t require additional jackets or coverings to protect them.

They are not double coated, but their fur is enough to provide the warmth that is needed for cold weather climates.

Bernese Mountain Dogs are not recommended for places with hot and humid weather, as they’re heavy, furry and vulnerable to the chances of overheating.

People living in warmer regions planning to get this breed, have to make sure that their overheating issue is sustained.

They have a tendency to bark, as they are great watchdogs and tend to bark, which is quite loud whenever they sense something unlikely.

Being easily trainable, their excessive barking habit can be controlled.

They are also not recommended to be living alone or in confined spaces – as it would trigger the barking habit even more.

These giant dogs are as gentle and tender with other animals, as they are with people and dogs.

They can socialize well with cats and other animals too if given the time.

It would be better if both the animals grow together which keeps them more friendly with each other in the long run.

Bernese Mountain Dogs are one of the most friendly dogs you would come across, they socialize well and are always up for playing sessions.

They can be aggressive towards dogs and other animals, only if they’re isolated for a long time.

It would never be natural in them.

They have a very mediocre potential to get obese, but still, they require exercises and long walks primarily to keep them mentally stimulated.

As it is said, a tired dog is a happy dog.

The Bernese Mountain Dog is a large breed and double-coated and with a longer guard coat.

They need to be groomed every in every 4-8 weeks, with even more frequently during the shedding season.

They have to be regularly brushed in order to keep their hair from tangling.

These dogs are not very energetic, and yet playful.

Since they are hard-workers they would love to have a play session.

Dog games like fetching and tug-of-war would be great for a daily play session and keeping him stimulated.

Ever since the early ages, they were known for their calm and balanced temperament, and being a working dog added to them being intelligent as well.

They can easily be trained and would be quick to learn different commands.

You won’t face any challenge training them, they are not stubborn and are enthusiastic about learning new tricks.

Bernese Mountain Dogs have a high tendency to build annoying habits, one of which is chewing.

It can be controlled by training them to limit their mouthiness to chew toys, which wouldn’t be difficult.

They fall in a very average price group and are an affordable breed for maximum people which is: $800 – $1800 USD depending on the breeder.

If you’re looking to get a Bernese Mountain dog from a pet rescue they’re even cheaper with a price range between $100 – $400 USD.

Where Do Bernese Mountain Dogs Originate From?

Bernese Mountain dogs have been known to be an integral part of the farms at Swiss Alps from past 2,000 years, ever since they were bred.

Ever since, The Bernese Mountain dog affectionately called as ‘Berner’ are found in a tricolored coat with a double coat of hair and a strong body within to perform all heavy chores.

Although now, they’re more of a family dog as they are highly affectionate and great with children.

They are well regarded for their calm and soothing temperament.

Even though they have less life expectancy, they still live a life filled with gentleness and companionship with people who are its pack members.

These dogs are highly intelligent which shows great potential to learn things quickly, but still, you have to treat them with patience.

Inculcating an obedience routine from the puppyhood would increase chances of them being a well-trained dog by the time they grow up.

They don’t show any signs of stubbornness or reluctance and hence training them would be a smooth process altogether.

It should be made sure that the environment they are living in is clean and are not triggers of any sort of ticks or fleas.

Being doubly coated it might get difficult for you to detect it.

They have to be brushed frequently – twice a week in order to keep their fur from strangling.

Baths can be scheduled once a week in order to detect any skin abnormality and ticks.

It is recommended to keep their fur-trimmed if the living conditions are humid.

Berners are vulnerable to many health issues due to irresponsible breeding and must be reported to the vet in case of any unlikely symptoms.

You probably might have to get them checked up with hip dysplasia, elbow dysplasia, hypothyroidism, and Von Willebrand’s disease.

Here is a list of some other common disease Berners can be prone to.

A major number of early deaths in Bernese Mountain dogs are due to cancer.

Symptoms include abnormal swelling of sores or bumps, sores that don’t heal, bleeding from any body opening, difficulty in breathing and elimination.

The treatments include conventional chemotherapy, surgery, and medications.

This is an inherited condition where the thigh bones don’t fit properly with the hip bone.

Dogs show pain and discomfort on one or both rear leg.

Some dogs, on the other hand, don’t show in externally, but the condition should be immediately treated to avoid arthritis in old age of the dog.

Dogs with hip dysplasia should not be bred.

Elbow dysplasia similar to hip dysplasia is a disease common in a lot of large breed dogs.

This can be a result of improper growth and development.

This type of cases results in weakened joints, at different levels of severity the dogs are also prone to arthritis.

This is a severe eye disease the Berners might be prone to if bred improperly.

It is a condition where the retina begins to deteriorate and they turn night blind, and with time they might also lose vision permanently.

Most of them adapt well with the disease unless the environment remains the same.

This is a disease that is found in both dogs and humans, which is a blood disorder that affects the clotting process.

Symptoms can vary from bleeding gums, nosebleeds, prolonged bleeding during heat cycles or whelping and occasional blood in stools.

This abnormality is most likely to be detected during 3 – 5 years of age and can be cured.

Being larger breeds, Berners have higher protein needs and protein ranks at the top of nutrition requirements, as dogs need amino acids and all 22 of them.

But dogs are only able to synthesize 12 of them and hence the remaining 10 must be included in her diet with meat, fish or even egg whites.

When it comes to a feeding routine, they must be fed with 3 – 6 cups of diet including proteins, fibers and essential fat for sustained growth and development, during the puppy stage.

The quantity would drop down soon after they start going into their adulthood which after 8 months of age, you can feed them at a maximum 3 times a day during their adulthood.

Berners at puppy stage after 6 weeks of their birth are given three vaccines, two of which are canine distemper and canine parvovirus and one is the most common for Rabies.

Once they cross their puppyhood, they just have to be vaccinated for Rabies every year and canine parvovirus every 3 years.

Berners are not really fit for apartment sized living and should be accommodated in large living spaces.

They are also highly energetic which requires a minimum of 30 minutes of vigorous exercise every day, in order to keep the study working dog in top condition.

The cost of raising a Berner might hurt your pocket a little bit, as on an average monthly expenditure on a puppy would range between $150 – $200 USD in food.

On average, including medical expenses, a Berner would cost $600 – $750 USD per month to raise.

Berners are widely known companion dogs and are very friendly with children, they have a great temperament and are sweet and calm beings.

Still, the children and dogs should always be monitored because children might tend to over-harass the dog.

It depends on how the Berner has been raised; chances are Berners with good social skills from birth make great friends with dogs.

They have innate social skills, which makes a happy-go-lucky dog with everyone they meet and greet.

Berners are friendly with their own species, it is very important to keep them socialized from their puppy stage.

Dogs who are raised with the right social skills, tend to grow up being more friendly with everyone.

To top it all, Bernese Mountain Dogs are one of the calmest and loving companions you would ever find.

They are obedient and immensely loyal to their family members.

They are highly energetic and require frequent training to keep them stimulated.

They would shed a lot during the shedding season; it calls out to you being patient with them.

They are hard workers and can also be amazing service dogs if they’re gone through the training required.

What do you think about the Bernese Mountain Dogs?

Share your story with the breed and feel free to ask any questions.

Indian Spitz – The Puffball You Need For Your Home

Can Dogs Eat Guava? Here’s why Guava is the Best Fruit...