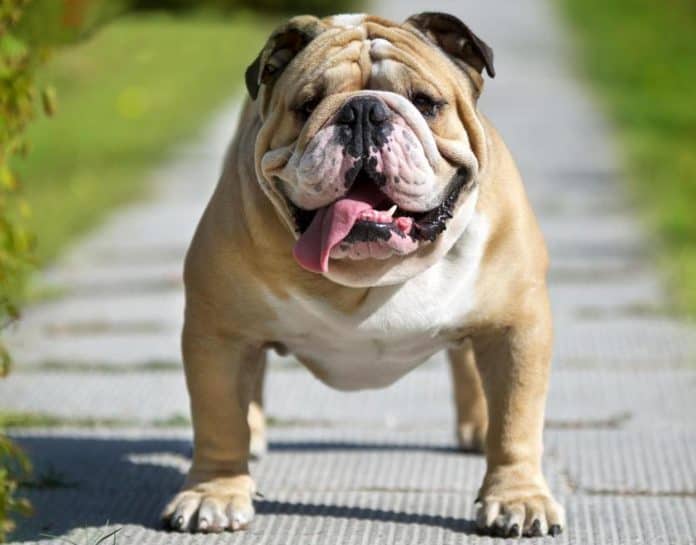 The bulldog was earlier known to be ferocious and to possess strength.

In recent times, it has earned the reputation of being a loving, gentle and friendly family dog.

The bulldog types include the American Bulldog, French Bulldog, and the English Bulldog.

Bulldogs are small to medium-sized dogs with a short height.

They are known to be very friendly and affectionate with their family members.

They like staying in cozy places and do not need spacious places to live in.

It does not have high tolerability towards cold weather because of its small nasal openings.

A suitable range for the cold temperature that a bulldog can tolerate is -3°C to 14°C.

It doesn’t have hot weather tolerability because of its small nasal openings.

The suitable hot weather temperature range for a bulldog is 29°- 37° C.

They are great watchdogs but don’t have an attraction towards barking.

However, it can start barking when it notices intruders or strangers.

They are not so friendly with cats.

They can be aggressive towards other cats.

It is better to not bring them in contact with each other.

Bulldogs are not very friendly with other dogs.

This depends on how well he has been socialized in his puppyhood.

They don’t need a lot of exercises because they are indoor dogs.

Exercising for almost 20-30 minutes every day is sufficient for the dog.

Taking care of the bulldog’s grooming is essential and requires efforts.

Bulldog skincare is of the utmost importance.

The bulldog has a squishy skin with a lot of folds which is a perfect place for accumulation of dirt and other particles.

It has a high potential for drooling.

The bulldog temperament is being calm, well-mannered and loving.

It gets along well with family members but likes to be a couch potato and unlikely to be playful.

It can be stubborn at times and isn’t easy to train.

It has low attention spans.

Short fun-filled activities will be helpful in training.

They are among the dumbest of breeds.

However, not all dogs are dumb.

The French bulldog is slightly better in responding to orders.

Puppies are fond of teething because they want to know more about their surroundings through their mouth.

Giving frozen chew toys or a wet cloth would help his gums to relax.

It can be expensive for the owner since the day it is brought.

It often is subject to medical issues and would need frequent vet visits.

Bulldogs are indoor dogs who have a loving, gentle and mellow temperament, unlike their ancestors who were extremely aggressive.

The puppies are cute but expensive.

Where Breed Came From?

In the 13th century, English bulldog seems to have originated in the British Isles.

Bulldogs origins say that it was bred for its strength and aggression.

It was used for the infamous sport of bull-baiting.

The Bulldog that we see today is not even close to the one in history.

Through selective breeding, a lot of qualities of the original bulldog have faded away and a new breed is being subjected to life-threatening diseases.

A bulldog can maximum reach at a height of 15 inches and is short in height.

It can be heavy and is prone to obesity.

Bulldogs are stubborn in general.

A good way to start training them is by rewarding them with treats.

Normal words like “Sit”, “Stand”, “No” can be taught by guiding the dog through treats.

Keep praising your dog when an improvement shows.

Refrain from scolding or beating your dog.

It may either start fearing you or think of that as a game and start chasing you.

Make the training sessions short so that they can easily grasp the instructions.

Bulldogs have squishy skin with wrinkles and folds.

This makes it susceptible to dirt and bacteria accumulation.

Buy some medial wipes from a store and make sure you wipe their folds every day.

Although it has a short hair coat, you need to brush it daily to promote shedding and prevent tangles and lumps.

Sometimes he is unable to reach the back part of his body because of its heavy build so pay attention to wiping off after they eliminate.

Use a shampoo formulated for dogs for his bath.

You can even make your own dog shampoo.

Brush his teeth regularly to prevent bad breath and other teeth ailments.

When the dog starts to engage in nail-biting, it is time for you to trim their nails.

This has occurred due to the incorrect selective breeding of this dog.

If you’re choosing a bulldog for your family, you have to be willing to spend more time at the vet clinic.

The brachycephalic syndrome occurs to breeds with shortened and flat faces which makes their nostrils small hence making it difficult for them to breathe.

During hot weather, they should be kept in cold places or indoors.

Their nostrils will inhale hot air which will lead to overheating and other problems.

Many dogs can’t run without gasping for air.

This is caused due to the folds on the skin of the dog.

It provides an ideal space for bacterial build-up.

Due to this the skin becomes red or develops a bad smell.

Mites are transferred from the mother dog to the puppy when it is very young.

This is the parasite responsible for causing demodectic mange.

It affects the puppy’s immature immune system which causes hair loss and itchiness in the face area.

This condition is also called the third eyelid.

The gland just behind the lower eyelid comes out as the third eyelid and is seen as a red lump at the corner of the eye.

This can occur in a dog less than 2 years old.

It should be taken to a vet as soon as it shows signs.

Obesity can cause hypothyroidism because folds and fat around the neck area of a bulldog obstruct the path of the gland which secretes the hormones to keep the body functioning properly.

This is the skeletal problems which affect the bone in the pelvic area and the dog feels pain while standing or sitting in a particular position.

Luxating patella is a similar kind of health issue in which the knee cap gets displaced.

They are prone to heart murmur where the heartbeats are irregular in rhythm.

An adult has to be fed once or twice a day.

A puppy until he reaches the age of 3 months has to be fed 4 times a day.

Gradually it can be decreased to three times a day till he turns 6 months old.

After that, he can be fed twice a day.

Their diet should contain dry food.

Wet foods are packed in cans which can be appetizing but it produces loose stool.

These dogs are prone to health conditions relating to their diet like allergies, weight gain, and flatulence.

Read our Guide To Dog Vaccination to have an in-depth knowledge of how to prevent your pooch from infections.

Cleaning the skin of your bulldog should be kept in mind.

They are prone to most of the skin diseases so if their skin is cleaned on a regular basis, these diseases can be kept at the bay.

Take them to the vet if you notice something abnormal.

These dogs aren’t good swimmers so make sure you always keep them under your supervision.

Put on a life vest on them.

Also, they can get exhausted pretty quick so keep recovery breaks in between 15- 30 seconds.

Maintaining a bulldog can cost a fortune.

Starting from its diet to medical expenses.

Buying a French or an English bulldog costs around $2000 on an average.

Including the vet visits, grooming, toys, and other accessories add up to $1800 in the first month.

Bulldogs are very gentle and patient when it comes to dealing with children.

When introducing the dog to the child, keep a watchful eye.

They are indoor dogs so as long as the child doesn’t force it to play, they’ll be fine.

Toddlers should never be kept with dogs without supervision.

Bulldogs have small nasal openings and small trachea which makes it difficult to breathe.

They make grumbling noises which sounds like growls and this doesn’t appeal other dogs.

That is the reason why other dogs may not get along with them.

However, they are friendly with other bulldogs.

Bulldogs and cats get along well with each other because of the kind temperament of the bulldog.

A bulldog’s face is scarier than it actually is.

The cat may get intimidated at first but their easygoing personality will make-up for it.

Before you decide on bringing a bulldog home, you should know:

These dogs are indoor dogs who get exhausted if there is a slight level of increased activity.

It is prone to various heart, respiratory, bone, reproductive and skin problems.

This will need more visits and you have to pay more attention to your dog.

Although they are couch potatoes, you can’t leave them alone for long periods of time.

They will develop separation issues and there might be significant behavioral changes in them.

Overall, it is a loving dog with fewer exercise needs and loves eating.

It would love to become a puzzle piece in your life and complete your family picture.

Bulldogs Were Almost On The Verge Of Extinction!

When bull-baiting was banned in England, instantly no one wanted bulldogs anymore.

Some were transported to other countries where they worked as herding dogs and others remained in England.

The breeders who saw this dog as a potential companion started breeding.

The new dogs were born with kind and gentle personality.