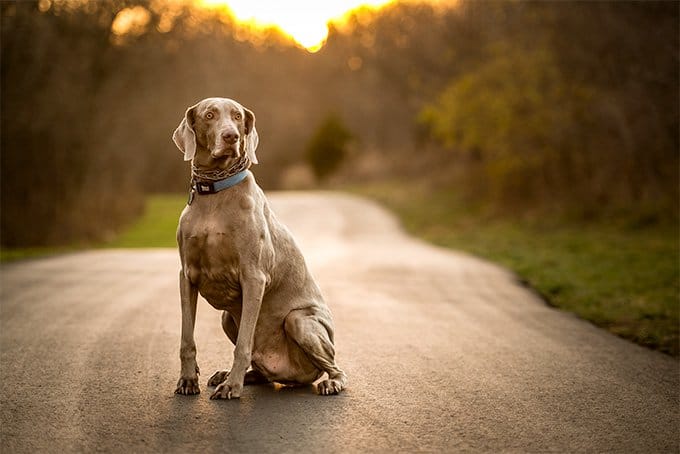 The Weimaraner, Germany’s sleek and swift “Gray Ghost,” is beloved by hunters and pet owners.

The American Kennel Club formally recognized the Weimaraner in 1943.

Weims aren’t a soft-mouthed dog like a Golden Retriever, and some have a low tolerance for small and furry animals.

He presents a picture of grace, speed, stamina, alertness, and balance.

The dog’s conformation must indicate the ability to work with great speed and endurance in the field.

Weimaraner temperament should be friendly, fearless, alert, and obedient.

They need to be kept in a large fenced-in backyard to prevent them from roaming.

Their bodies are strong and built for work, streamlined, and able to run with great endurance.

They are large game trailing and versatile gundog.

The head is strong with dropped ears.

Weimaraners are genuinely loyal, soft, and gentle, loving, and affectionate dogs towards their handlers.

This breed enjoys quality time with its owners despite the activity and considered a great therapy dog for those in need.

They respond strongly to their handler’s emotions because they bond closely.

These are not apartment-friendly dogs.

If you don’t have a garden, you may have to reconsider your choice for having a puppy from this breed.

They will do okay in an apartment if exercised sufficiently.

These dogs are relatively inactive indoors and will do best with at least a large yard.

They are big, resilient looking dogs, but their coat is short and coarse, with no undercoat.

This makes it hard for them to handle cold weather.

It is necessary that the dog is well fed and that it has enough activities to be in good physical condition, which is necessary for him to survive the coldest days without any problems.

Breeds with short noses, like Bulldogs or Pugs, since they can’t pant as well to cool themselves off.

Their short grey coat makes them suitable to warmer climates to an extent.

Average to high: The Weimaraner is a vocal breed.

Not the best choice if you are looking for a quiet breed.

They often bark loudly and howl at times.

This breed can change their barks depending on their emotional level and what they’re trying to say.

They are reserved with strangers, dominant with other dogs, predatory toward small animals such as cats and rabbits.

If you’ve got cats and a Weimaraner together, you don’t have 2 pets, you have a mutual problem.

Even the most well-behaved, well-trained dogs have been known to kill cats.

If you want more dogs in your family or you’d like to join dog meetups, the Weimaraner can be a great choice.

They tolerate other dogs well if properly socialized.

Other pets, such as cats, rodents, or reptiles, should be kept away from them; because of their hunting heritage.

They need regular exercise for their physical and mental well being.

The Weimaraner is social and should be indoors; however, it should be taken out for daily outdoor activities.

The biggest job in weimaraner grooming is keeping the nails short.

It is important for the comfort and health of your dog and hence, cannot be overemphasized.

This breed requires an occasional combing to remove any excess or dead hair.

Don’t forget to clean the ears, since having an ear structure that impedes air-flow makes for the potential of infected ears.

The Weimaraner is a highly playful breed.

Excited barking and sign of nipping will alert you to play.

Although a playful pup sounds endearing, consider how many games of fetch or tug you want to play each day, and whether you have kids or other dogs who can stand in as playmates for the dog.

“The good and the bad news is that Weimaraners are very smart dogs!

They learn quickly, and that includes both good and bad behaviors.

Early socialization and puppy training are vital and help to ensure that the Weimaraner grows into a well-adjusted, well-mannered companion.

They are prone to destructive chewing.

Weimaraners have a strong tendency to nip, chew, play-bite, or herd people.

They are highly intelligent and need activities to keep them occupied to prevent destructive behavior such as chewing and digging.

If you choose to purchase the Weimaraner, you should know that the mentioned amount of money is an average of the collected data from breeders’ sites and puppy finder places.

Always alert, the Weimaraner has great physical stamina and an effortless, smooth, and swift gait, which comes in handy when it is used to hunt large game.

Weimaraner color is gray, smooth, sleek, and short in length.

The Weimaraner also has a soft facial expression.

The full-grown dog has striking yellow eyes, whereas the Weimaraner puppy has blue eyes.

They have webbed paws, making them strong swimmers.

This affection and involvement is part of what owners love about them.

But the downside to this aspect of the Weimaraner temperament is the high incidence of separation anxiety in the breed.

These dogs also work as bomb-sniffers for the U.S. military.

Where Weimaraner Came From?

The Weimaraner appeared in the early 19th century.

Thought to have originally descended from the Bloodhound, the modern Weimaraner is the product of selective German breeding, mixing Red Schweisshund and various pointer breeds.

Regardless of its origins, the nobles restricted the ownership of these dogs to the membership of the German Weimaraner Club.

They were later developed as a bird dog as big game declined in Germany.

Howard Knight was the first American, who brought two Weimaraners to the United States in 1929.

These are medium to large breed and they generally mature at 1 to 2 years, although they reach their full size around 6 to 8 months.

These dogs have deep chests and considerable ‘tuck-ups’ after the rib-cage.

They should look very athletic.

On average, male Weimaraner weight will be greater than females.

This breed requires an assertive but patient, firm and consistent handler for effective training.

Weimaraner-training has huge potential because these dogs are very food-motivated and also tug-motivated, and this means they are ideal dogs for dog sport homes.

Weimaraner care does not require much attention.

Even if he has been running through mud, the dirt seems to fall off him.

Trim their nails once or twice a month if your dog doesn’t wear them down naturally.

If you hear clicking on the floor, they’re too long.

Check your ears weekly and wipe them out with a cotton ball moistened with a cleanser recommended by your veterinarian.

Although these dogs are very healthy and strong, they may suffer from specific genetic problems.

This breed is susceptible to minor health problems such as entropion, hypertrophic osteodystrophy, elbow dysplasia, hemophilia A, distichiasis,

One of the most common diseases of Weimaraner dogs is hip dysplasia which is both hereditary and usually occurs at 5 or 6 months old.

In the case of hip dysplasia, the condition is a coxo-femoral joint malformation.

This breed generally does not suffer health issues relating to the nasal cavity.

Symptoms: Extremes of itching, changes in the skin, red rash, loss of hair.

Weimaraner dogs are prone to certain types of skin tumors, most commonly hemangioma and hemangiosarcoma.

In case any lumps are detected in your dog’s skin, go immediately to the vet for a check-up.

Entropion is a condition where eyes can be damaged completely.

The eyelid rolls inward, causing the eyelashes to rub against the cornea.

Distichiasis is not exactly a disease, but rather a condition found in some Weimaraner puppy dogs that can lead to related eye diseases.

“Double lashes,” is the other name for the same and is manifested by two rows of eyelashes in a single eyelid.

The major problem with this genetic condition is that the excess lashes usually produce rubbing on the cornea and excessive tearing.

This breed of dogs is genetically predisposed to spinal dysraphism, especially spina bifida.

Spinal dysraphism is a term that covers various types of problems that occur in the spine, the spinal canal in the mid-dorsal septum, and neural tube of the fetus.

Avoiding the use of combination vaccines in Weimaraners has been shown to prevent hypertrophic osteodystrophy in the breed.

Hypoallergenic: Weimaraners don’t do well with allergy sufferers by causing an allergic reaction.

By a deficiency of thyroid hormone, Hypothyroidism is caused and may produce signs that include infertility, obesity, mental dullness, and lack of energy.

The amount of food your adult dog eats depends on his size, age, build, metabolism, and activity level.

Dogs are individuals as well, just like people, and they don’t all need the same amount of food.

Reactions occur most often at 12 to 16 weeks of age.

Regular veterinary checkups, as well as blood, eye, and hip tests, are recommended.

They also suffer from joint pains, bleeding disorders, eye disease, and some cancers.

Feeding a quality kibble is expensive, and again, the cost of food keeps rising because everything the manufacturer is buying also goes up in price.

An active older kid who’s familiar with dogs, this dog can be a great companion.

This breed is far too rambunctious for toddlers, however, and may chase small children while they are running.

They can be ‘off’ with other dogs.

Female Weims can dislike any dog or feel much need to ‘tell’ another dog off.

Extreme aggression of a dangerous level is not common in the breed.

But the entire breed can very frequently be reactive towards other entire males, in an ‘all noise’ way.

Smart, active, and loyal, this breed makes a great addition to your family, unless you’ve got cats.

Even after extensive training, they have an extremely high prey drive and often kill cats.

The typical Weimaraner breed is friendly, fearless, alert, and obedient, all traits that make him an excellent companion.

On the flip side, he’s assertive, smart, willful, and restless.

They are generally dominant around other animals but are gentle, protective, and faithful to their owners.

This breed was bred to function as a gundog, able to hunt animals of all sizes, including large animals such as bears, wolves, and deer.

For owners who want a large, active dog for hunting, hiking, and other outdoor activities, Weimaraners are great companions and highly intelligent but need activities to prevent destructive behavior.

Something Fun About Cane Corso!

Let me tell you a fun fact about Weimaraner:

This beautiful breed has inspired some amazing artwork over the years.

Go through the art of William Wegman, who used his Weimaraners in his artwork.