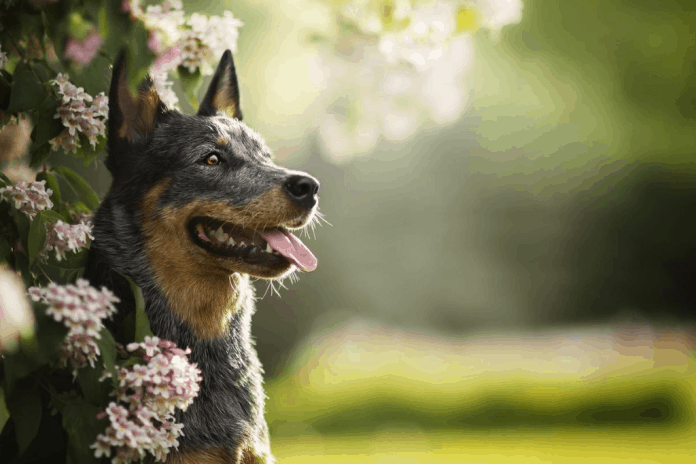 There are sporting dogs, there are working dogs; there are terrier dogs, there are police dogs; and then comes the Australian Cattle Dog. Also known as Queensland Heeler or Blue Heeler, ACD was bred by Australian settlers to drive herds across massive and rough terrains.

Australian Cattle Dog has a muscular built and a broad skull – probably the only thing in the entire universe that can break Thor’s hammer.  Though ACDs are known as herding dogs, they can be trained for search and rescue operations, or hunting. They can be high alert watchdogs as well.

ACD was selectively bred for its high energy and stamina, and is known to be very lively. Wondering if you could adopt an Australian Cattle Dog? For starters, let’s just say you need to get your lazy-bone replaced.

ACDs are survivors. In 2009, Sophie fell off a boat while on it with her family off the coast of Queensland.  This Australian cattle dog pup swam more than five nautical miles, survived harsh weather conditions, and returned home to her family. Yes, you HERD it right!

A medium-sized breed, they are marginally longer than taller and have a sturdy upper-body.  Female Australian Cattle Dog is smaller than males.

An Australian Cattle Dog lifespan ranges from 12 to 15 years.

These dogs spend most of their time outdoor and they require enormous open space to play a fool. Unless you have an apartment with a huge backyard, they may not be compatible.

Australian Cattle Dog is possessive and highly protective of its owner. It mostly restricts itself to one member of the family. Can live in harmony with children if raised together.

ACDs gel in with other dogs if raised together since puppyhood, but may get a little possessive if they don’t get their required thunder. They can become friends with cats if brought up together but mostly, small animals are prey for them.

This breed is not particularly vocal about things except when it needs attention and cuddles or is wary of a stranger.

They stand 10th in Stanley Coren's book, The Intelligence of Dogs, amongst the world’s most intelligent dogs in accordance to command trainability. They have an active mind and work on their independent instincts.

They are the dog version of fitness maniac so much so that it can go on trekking in rough terrains for days. With that level of energy, be ready for some hardcore workout with your ACD.

They have a dust-proof, rust-proof coat that protects them from every external condition. All they require is occasional brushing, regular nail trimming, and a lot of attention.

Australian Cattle Dogs are not hypoallergenic at all.  They shed a little and leave dander behind which may cause allergies in humans prone to it. All you need is a tad bit grooming.

Widely recognized as The Blue Heeler, Australian Cattle Dog is a medium-sized herding dog. They are high on stamina and endurance. ‘Heeler’ as they are called, is because they tended nipping cattle at their heels to kettle them up.

The length from their breast-bone to buttocks is longer than the height of their withers which makes them weigh 30-50lbs but is mere 17-20inches in height.

Their broad skull, pricked ears, and athletic shoulders give them a powerful personality.

Muscular and well-built, they are high-energy working dogs. They can work/play the entire day outdoors, and would still start wagging their tail on your slightest cue to going out. If your energy does not call the tune of your ACD, they might resort to entertaining themselves by digging in the trash or your backyard.

They need somebody who can implement an organized training plan to combat the caution of strangers and control their strong preying instincts. They are the smartest when it comes to obedience training.

They may not be best with children, and if not exposed to them since puppyhood, ACDs may develop a tendency to nip them as well (all they need is an Achilles’ heels).

ACDs are very protective of their owners and would not leave their side even for a second. Do not forget to chain your relatives on their next trip if your baby is around.

Australian Cattle Dog as a pet is an ongoing adventure for 12-15 years. It doesn’t change the fact that you are a pet parent; it just makes you a wee bit cooler.

Back in the 1800s, Anglo-Australians started re-creating the Australian outback into expansive ranchlands which slowly became the prime-region for the beef industry.

Nevertheless, harsh conditions in that region made it difficult for cattle ranchers to assist their cattle. Necessity being the mother of inventions, with that began a process of deliberate cross-breeding of dogs to find one perfect breed to herd the cattle.

To tailor-make, George Eliot crossed wild Dingoes with Smithfield (now-extinct). Their pooch was further crossed with blue merle Highland Collies. The resultant dog was almost what the farmers wanted. Almost!

Jack and Harry Bagust added the cherry on the top by breeding Dalmatian with some of Eliot’s first set of dogs, giving birth to an Australian Cattle Dog puppy as we know of today.

A perfect herder for the rancher’s cattle, and a perfect Heeler for your heart.

Australian Cattle Dogs are not only herders but also amazing “cowdogs”. Hailey, a rescue Australian Cattle dog of Montana, once took her owner by surprise by riding a mechanical bull with sheer balance and poise. She has taken up this duty of riding a bull to entertain people around her since then.

In 1980, the Australian Cattle Dog was recognized by AKC as a working dog. With the inclusion of Herding Dog as a type in 1983, ACD became a herder.

Australian Cattle Dog is a mix of wild Dingo and Highland Collie which can make it a very hostile breed if not let outdoors. They need a lot of exercise and companionship. A non-working dog can participate in dog-sport, athletics, or learning a new activity that stimulates their mind and body.

They are very defensive of what they consider their territory and will do anything to protect it from absolute strangers.

The temperament of Australian Cattle Dog is reserved with strangers and it may turn into a dangerous suspicion if not given proper social training. Heeler puppies should be introduced to the behavior of ‘good men’ so they can recognize these traits in a stranger.

They are smart but sometimes they can bear a sudden grudge against a fellow dog. They may attack and sometimes end up killing cats and other small animals.

Australian Cattle Dogs are versatile dogs but they can stubborn at times. They have a mind of their own and can be dominant to prove a point. Positive and consistent training can help control their I-am-the-boss attitude.

…Heelers are red, Heelers are blue, and all of them can run faster than you. 😉

Australian Cattle Dogs have a dense under-coat and an oil-resistant, weather-resistant outer-coat which protects them from all the external elements.

“Wear and Wash Dogs”, as the name goes, they require minimal grooming. A quick brushing once a week and an occasional bath do the work.

However, Australian Cattle Dogs shed their undercoat twice a year, and need to be brushed at least thrice a week during this time. Though the coat falls in clumps, it is necessary to brush them periodically to avoid dirt and oil residuals on the outer-coat.

Dental health is important. Brush your ACD’s teeth twice or thrice a week to keep his mouth from smelling and to avoid gingivitis.

Heelers tend to grow nails like a scalded cat. Make sure to trim it as frequently as possible.

You must feed your Australian Cattle Dog pup at least three meals a day of ½ a cup each serving.

ACD puppies need a minimum of 22% of protein and 8% of fat in their puppy food. Don’t be concerned if your nipper is eating a lot. They are an active breed and they require the right amount of nutrition. You may be feeding him according to his age but he may remain thin and hungry. Don’t be hesitant in giving him more food as long as he is burning the calories.

For an adult dog, the food intake steadily shifts to two meals a day of 1.5-2.5 cups per serving.

An adult ACD needs 18% of protein and 5% of fat. You can provide extra protein if your dog has a lean appearance. You can also increase fat for sporting or working dogs that need added energy.

Senior ACDs tend to become less active with a slower metabolism. You can either continue feeding in the same pattern or plan a senior dog diet. If your dog starts putting on weight, try feeding him a little less than regular.

NOTE: Australian Cattle Dogs need 20-30 calories per lb of their weight. Get your Heeler’s weight checked routinely and change his diet accordingly.

Australian Cattle Dogs need strong exercise and plenty of running. You need to nurture them in an environment that keeps them mentally and physically healthy. Apart from this, ACDs are healthy dogs but they are prone to certain health conditions.

Get your puppy vaccinated with canine parvovirus and canine distemper in the initial 6-8 weeks followed by boosters after every 3 years.

Deworming is necessary. Ask your vet about a worming prevention plan from 2-12 weeks of your puppy.

There are a lot of things to keep in mind when it comes to vaccination. You can read our Guide To Dog Vaccination to know more.

Is it okay to keep an Australian shepherd in the city?

Yes, you can keep an Aussie in the city. Some people are already raising this dog in big cities. This breed tends to like busy areas but it still depends on dog to dog.

Australian Shepherds are great family dogs. These are not just the caretakes and protectors but also the most loving and affectionate dogs who love their families. These dogs usually do not like socialising with other people for a long period of time and love to be with their families a lot.

Australian Shepherd is a mix of what breeds?

A popular misconception is that the Aussies were bred by using Border Collies but that is very far from the truth. Border collies and Aussies are related but not bred using the former. The Aussies are actually considered to be the descendants dogs used by the shepherds such as the Pyrenean Shepherd or the Old German herding dogs.

Yes! Australian Shepherd dogs are very smart. These intelligent working breed stands 66th in the rank of smart dog breeds known for their intelligence and adaptability for obedience training or working intelligence.

Is the Australian Shepherd born without tail?

That’s all about the Australian Cattle Dog. We hope you liked this article and it helped you know this breed better.

Feel free to ask us your queries and also let us know your review on this article.

Pandikona – The Abandoned Guardian Of The South!