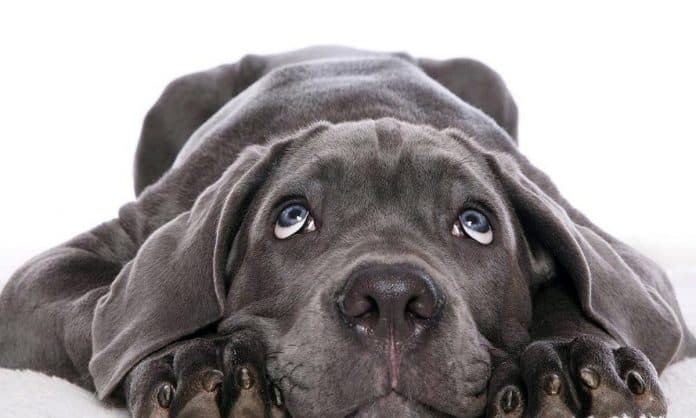 The findings showed that the meaningful phrases were processed in the left hemisphere of the brain, regardless of intonation, which is similar to human’s processing, but the meaningless phrases did not register.

Dogs use the right side of their brains to understand pitch and tone.

“It helps dogs to have a meaning for particular words.”

Maybe you looked at your dog staring longingly out the window wondering what do dogs think about all day?

While you may not be able to pinpoint precisely what your pooch is thinking at any given moment, you can get to know his personality and behaviors, which will help you understand what he may be feeling in the whole day.

If you are thinking about how a dog’s brain works, then it is not a word thing. It can actually help you understand him better.

Humans have been pondering this question for centuries.

There are numerous studies on how do dogs think?

Intonation did still play a role in the study, being processed in the right hemisphere of the dogs’ brains to see if inflection played a role in the dogs’ understanding.

The conclusions of this study say that the meaning of phrases and the tone in which dogs deliver are processed separately to help dogs in identifying what specifically was said.

The science of dog behavior is revealing something exciting – “Dogs have evolved their mental toolkit for living alongside humans, one that’s not the same as ours, but perhaps equally exquisite.”

So, What Do Dogs Think About?

While research on canine brains is certainly helpful in understanding that dogs can comprehend communication, you may be yearning for more details on what precisely goes through his mind or how to understand dogs?

The truth is: there’s no concrete way to know for sure about these minute-to-minute thoughts.

It’s up to you to decipher his cues and imagine his detailed thoughts.

How Do Dogs Think?

In scientist Marc Bekoff’s new book, Canine Confidential: Why Dogs Do What They Do.

He carefully lays out the current state of scientific knowledge about dog behavior, cognition, and emotion and what we know about dogs and, perhaps even more important, what we don’t know.

Emotions can be roughly divided into two kinds – basic emotions or “gut feeling,” which arrive without warning, and “reflective” emotions, which require conscious thought.

Fear, anxiety, and affection fall into the former group; guilt, pride and grief into the latter.

In the process, he challenges some common misconceptions.

All animals — human and nonhuman alike display dominance; it is a fundamental aspect of social behavior.

Dogs do display dominance, and we need to dominate them in order to get the behavior we desire.

Training methods that rely on intimidation, fear, and punishment are scientifically ungrounded, unnecessary, and unethical.

2. Dogs Feel Guilty When They Eat Our Expensive Shoes:

When it comes to dogs and guilt, confusion has blown around like dandelion seeds in the wind.

3. Dogs live in the present:

It isn’t true that dogs anticipate and plan for the future, and have thoughts about and memories of the past.

Past experiences shape who a dog is, and trauma leaves a mark.

This statement gives the impression that love is a one-way street, and our dog’s love us no matter who we are, what we do, or how poorly we treat them.

Actually, no: Dogs have conditions, just like we humans do.

5. All dogs need is a soft bed and food in a bowl:

We need to try to see the world from a dog’s perspective so that we can provide them with an interesting and meaningful life.

As a small example, we may think of a dog walk as providing physical exercise to keep our dogs fit and slim.

But dogs also need to be able to exercise their senses, particularly their sense of smell.

On average, a dog will spend about one-third of her time sniffing.

Some dogs don’t like to be hugged, and we should respect their personal space and find other ways to show our affection.

What Do Dogs Think About Humans?

Do Dogs Think In English?

How Do Dogs Think Without Language?

It is obvious to me that dogs think.

But it seems very unlikely that their thoughts are expressed in the human language that surrounds them.

A dog doesn’t generally “think” or “understand” the language, but more the actual tone of the voice in which a command is issued.

Hate to break this to you, but dogs don’t need a language to think.

Thinking is a learned behavior that can only be learned from a verbal community.

Dogs lack such a verbal community and therefore, do not learn this skill.

After we are convinced that dogs are thinking, reasoning, feeling human emotions, and so forth, we are merely labeling their behavior in the only way most of us know how – by anthropomorphizing using the only dialect we have.

Do Dogs Think In Barks?

Many pet owners wonder if their dogs do think in barks or if the language that our canine friends are using is actually understood in barks.

While we as humans tend to have words as well as pictures and thoughts that run through our minds, your pet also has the same interpretation of languages and thoughts too.

It’s not unusual to feel on the same page as your pooch at times, and part of this could be due to the way that your pup learns a language and expresses ideas inside its head.

What Is My Dog Thinking When He Stares At Me?

Among the most amusing and creepy dog behaviors is the dog stare, whether it’s directed at an owner, an unsuspecting guest or a steak dinner.

Let’s face it: Dogs love their owners, but why does my dog stare at me constantly?

It does not happen because they’re trapped in a reverie of devotion.

Rather, it’s because they think they might get some treats.

This one is often tied into desire because she wants something out of you.

Dogs might also fixate on people who have rewarded their staring in the past.

They carry a wealth of information, such as identity, sex, age, emotions, and communicative intentions of other individuals.”

Another reason for a dog’s stare is because they are trying to figure out what we want from them.

And if your dog really wants something from you, they’ll often provide other cues to go along with their stare.

What Do Dogs Think About When They Are Alone?

Dogs have an ultimate way to sense what is going around, especially when they have learned by heart normal schedule of the day going by.

How To Understand Dogs And What do dogs Feel?

While they don’t experience higher emotions, they have the same sort of basic emotions as us, such as happiness, sadness, relief, frustration, and fear.

These basic emotions are essential in helping dogs learn about the world, and encourage them to behave in certain ways to protect or help them.

If a dog feels fear, they’re likely to seek out safety from the threat and gain a sense of relief.

While the positive feelings dogs get from casual cuddles, feeding, grooming and other care encourages good relationships with those around them.

Of course, your dog can’t tell you how they feel, but you can understand their emotional behavior better by observing their body language and getting the grip of basics of dog communication.

While people-staring is more common, some dogs might fixate their eye on inanimate objects, walls, or shadows.

This behavior may be amusing at first, but it can indicate serious issues, particularly if it becomes compulsive.

As well as staring into space, is sometimes attributed to floaters—the harmless little specks that float around in our vision—but it can also stem from abnormal brain activity, and stress.

If you observe this type of behavior, it’s best to take your dog to the vet for a checkup.

If they become obsessed with this behavior, they can choose this over other ones, like sleeping and eating and affection from the owner.”

Knowing how fascinating our dogs’ brains just make them feel even more like part of the family.

Why Do Dogs Have Whiskers? Can You Cut Them? Do They...