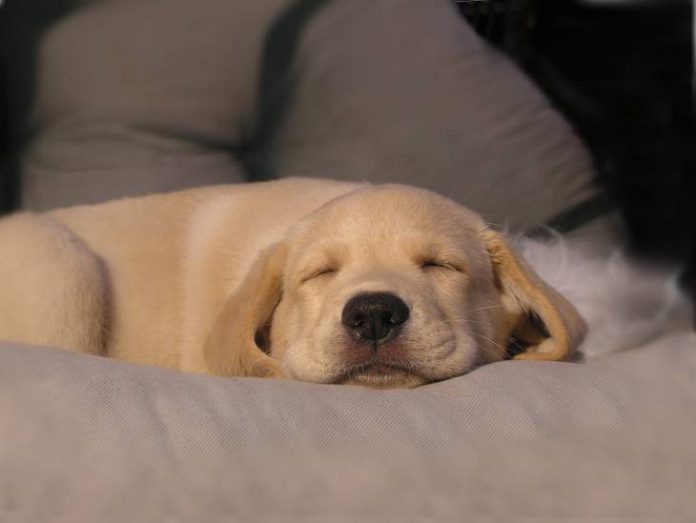 Aren’t dogs really adorable when they have their little eyes shut? One of their dog dreams has started in their sleep while you enjoy them sleeping.

But, have you ever noticed your dog twitch their leg, growl, quiver or paddle with their paws while they are asleep?

As a dog owner or an enthusiast, you must have pondered over the question of “Do dogs dream?”, “Do dogs dream like humans?”, “do dogs have nightmares?”

We’ve got your back to tell you everything about dogs and their dreams.

The structural composition of all mammal brains is almost similar.

The electrical activity that goes inside a dog’s brain is similar to that of a human brain.

Non-REM is also called as Slow- Wave Sleep (SWS) which is responsible for recovery.

It accounts for 20% of the total sleep time.

If this stage is disturbed then it may result in sleep deprivation.

They sleep in bursts throughout the day, unlike humans.

This is the stage where the dreams start occurring.

Dogs naturally possess the ability to wake up quickly.

This relates to their ancestor’s quality, the wolves, who were alert and quickly woke up to protect their pack.

In 2001, Matt Wilson conducted an experiment in Massachusetts which involved lab rats.

These rats were kept in mazes for the daytime and given certain tasks inside the maze.

The researchers recorded the brain activity of the rats.

The same neurons were recorded when they were in the REM sleep.

This meant that the rats were possibly dreaming about the maze in which they were working in the daytime.

As soon as the dog dozes off to sleep, you will notice rapid eye movements, irregular breathing, and in old dogs, you may notice muscle twitching.

This comes to notice because of the pons.

It plays an important role in dreaming and REM sleep, dreams are most likely to originate in the pons.

As puppies, the pons isn’t very developed and often the puppy’s actions give a clue as to what they may be dreaming about.

Some puppies move their paws while sleeping as if they were running in the yard behind a squirrel or a bird.

When dogs are involved in seeing a good dream, they have different signs as compared to when they are having nightmares.

A dog may twitch, make quiet noises or kick/paddle their paws when they are having a good dream.

They are relaxed and happy in that happy state of sleep.

When they get nightmares, they are likely to get startled from their sleep and wake up.

If they wake up from their sleep, they are known to growl or bite.

Some still feel like they are living inside their dream.

They can also get involved in defecating or urinating if they’re having a bad dream.

This can lead to them losing control over their elimination.

You must take them to the vet if this happens.

Dogs trying to howl or cry in their sleep are also experiencing nightmares.

Immediate surroundings of the dog may responsible for causing nightmares.

Loud, high tempo music, sickness or having ignored by the owner can be the reasons to cause nightmares.

Nightmares may happen to any dog as such but the higher chances of having a nightmare are in rescue dogs or adopted dogs.

Dogs who have been adopted or rescued face harsh difficulties earlier in their lives some of which the owner has no knowledge of.

Nightmares may remind them of such incidents and thus lead to bad dreams or other physical effects.  Sometimes nightmares are confused with seizures.

It is best to not wake up your dog in such situations.

Try to relax him while he is having a nightmare.

Sleep Apnea is found in dogs who are obese and flat-faced such as English Bulldogs, Boston Terriers, and Pugs.

Their flat face causes difficulty in respiration and dogs may collapse and fall up to 20-30 seconds.

This can be solved by reducing the weight of the dog, surgery and using steam humidifiers.

Insomnia is generally rare in dogs but it can be caused by some underlying medical issue such as arthritis, anxiety, frequent urination or itchiness.

This can leave the dog deprived of sleep which can make him exhausted in the next morning.

It is a nervous disorder where it can cause excessive sleep to the dog and then abruptly wakes up and walks away as if nothing happened.

It will remain dizzy for the whole day.

It is generally seen in younger dogs.

It is cured by giving some antidepressants.

During a narcoleptic episode, he may fall/ collapse on its side and fall asleep.

During REM all our physical activities are stalled because of the pons.

But if your dog is involved in physical activities during his REM, like running into walls or becoming attacking or violent.

Your dog will wake up without any confusion or disorientation.

Take your dog to a vet if you notice abnormal sleeping habits from your dog.

Tips for A Peaceful Dog Sleep:

Take your dog out for walks and playtime.

Exercise will tire your dog which would mean a peaceful night sleep without interruptions.

Exercise for dogs also helps in keeping him fit which in turn keeps medical ailments at bay.

The time spent on playtime depends on age, breed, and size of the dog.

Puppies are full of energy and are involved in exercising more. They also sleep more.

As puppies, they should be taught to sleep in dog crates.

Crates are a great option to provide security and comfort in a den-like structure.

They are also safe from other household dangers.

These help the dog to control their bowel movements and urine.

Crates for dogs are an essential part of potty training your puppy.

If you know your dog gets nightmares frequently or growls in the sleep then try to make their sleeping environment more relaxing for them.

Play some relaxing music or keep the TV on for some soft background music.

This will help the dog to calm down and ensure a good sleep.

Maintaining a proper routine for dogs adjusts their body to times and activities.

A specific time for food, exercise, and sleep would keep them healthy.

Having a schedule develops them into a well-mannered dog and also ensures long term happiness.

If your dog has trouble sleeping at night, there may be some underlying medical condition.

Make sure you get them checked.

Some medical conditions like hip dysplasia, arthritis or aging can cause pain and hamper sleep of the dogs.

Overheating, excessive shedding or dog eye discharges can also cause irritation to your pooch.

Sometimes extreme temperatures may cause discomfort to your dog.

Dogs with more fur are susceptible to get overheated.

Read how to keep your dog cool during summer.

Refrain from touching them as they may turn to bite or growl if they wake up.

Puppies breathe faster than the older dogs but if the breathing problem is more than normal then get him checked.

What Do Dogs Dream About?

According to live science, “dogs dream about doggy things”.

Dobermans will dream about chasing dream burglars, a golden retriever may dream of retrieving sticks or a ball.

They also mention that for some reason unknown, a dog’s size may be a determinant in the size of a dream.

Dogs are likely to dream about things that they experience in their daily lives.

They may dream about some good moments with the owners or something that may have hurt them.

Sleep for a dog is observed as the most time-consuming activity in a dog’s life.

Dogs have been wired the same way as us humans.

While some owners like to keep them close during their sleep, some have provided crates for their dogs.

What is similar is the dog should feel comfortable and complete his sleep stages systematically.

Their sleeping stages are similar to us but only differ in the time spans.

No one has been able to record dreams as yet.

But even if they do, comparatively, their dreams would be simpler than ours on any given day.

After all, dogs are simple creatures and they will always stay by your side to give you unconditional love and support.

Tell us your thoughts about this article!

Comment down below how your dogs have reacted while they were sleeping.

Share this with your friends who are eager to know about dogs and their dreams.