Notice: Undefined variable: user_roles in /home/dogisworld-ioezh/dogisworld.com/public/wp-content/themes/Newspaper/functions.php on line 230
 Akita | Everything About Akita Breed | Dog is World 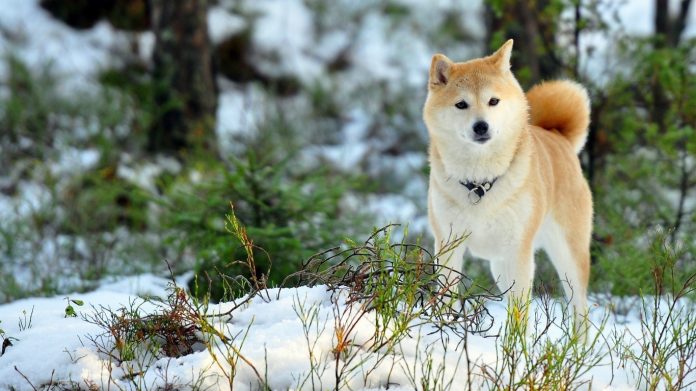 Akita comes from Japan but due to its loyal nature, it has found a home in the USA.

The difference between American Akita breed and Akita Inu is in their sizes and coat colors.

They were earlier used as hunting dogs.

The story of Hachiko who is known to all was an Akita.

Akita is a medium-sized dog whose origins trace back to Japan.

These dogs are known to be good family dogs.

If trained properly, they are known to follow commands and get along the members of the family.

They are good at being guard dogs.

They are aggressive and hence not good at being apartment dogs.

They have the potential to wander away from the house.

You can take them outside even in freezing weathers.

They are well suited in cold environments so it is difficult for them to survive in hot weathers.

After 32° it becomes too hot for Akita and they should be kept indoors.

The idea of shaving their hair seems appealing but you shouldn’t shave off your dog’s coat of hair during summers.

It may get susceptible to direct sunlight and cause rashes or burns.

If you’re looking for the quiet and silent dog who doesn’t bark too much, this may be the perfect one for you.

They grumble and murmur at times.

They are bound to chase cats if they see one.

It is better to keep them away from cats.

Akita dogs are aggressive towards dogs of the same sex.

They may get involved in fights.

Keep them away from same-sex dogs.

However, they get along well with the dogs of the opposite sex.

They have an aggressive personality so avoid taking them to dog parks.

They need exercise for about 30 minutes to an hour.

They are filled with energy so you have to keep them busy in some of the other activities.

Two or three times a year it sheds more than normal.

It is necessary to brush its hair regularly using a bristle brush.

They are affectionate and playful and will follow around the members inside the house and want to participate in household activities.

Training an Akita requires an owner who never accepts defeat.

You should establish some ground rules and the dog should accept it.

They have average intelligence.

They require almost 25-40 repetitions for understanding a new command.

It is ranked 54th in the Intelligent dog list.

It likes to carry things in its mouth and chew on them.

It is a mouthy breed.

It likes to play-bite, nip, and chew.

Make sure you provide them with enough chew toys.

They have a trait of carrying around things in the house and following the owner which shows their love in a way.

They are medium to very expensive in terms of buying.

In the 1920s, a loyal dog named “Hachiko” brought fame to this breed.

A statue of Hachiko still exists in the Shibuya station, Tokyo to honor his loyalty towards his owner.

It is loyal, dignified and courageous.

It can survive in cold regions but it isn’t suited for hot climates.

With its standing ears and straight posture, it looks no less than a courageous wolf!

Where Breed Came From?

The Akita breed has been famous since the 1600s in the Royal Northern Province of Japan.

It was brought to America by Hellen Keller.

The dog was about to lose its importance during World War 2.

But some of the breeders kept Akita in remote locations and today we can see a whole lot of them.

They are medium to large-sized dogs.

The breed is known as Akita Inu in Japan.

They are slimmer than American Akitas.

American Akitas are heavier and have a built body.

Akita puppies are known to be stubborn when they are getting trained.

The best way to get them trained is by teaching them basic commands first.

When he’s a puppy and he has had vaccinations, start to socialize him to his surroundings. Read our Guide To Dog Vaccination to get an in-depth idea of vaccines.

Socializing will help him to remain calm around those people.

Make sure you reward them with treats if you see any good behavior.

Akitas have a tendency to drool.

They also have high shedding rate.

But Akitas are like cats, they keep themselves clean.

They are easy to clean.

Their coat has to be brushed regularly.

Spray a little amount of water on their coat and then use a firm comb.

This makes it easy to take the damp hair out of the combat once.

It does not need frequent bathing.

Trim their nails regularly to avoid injuries to their paws.

Take a wet cotton swab to clean the dog’s ears and prevent water from entering inside the ear as it may cause infections.

Generally, Akita is fit and healthy if it gets food and exercises properly.

But there are some diseases which are specifically found in a larger amount in this breed.

Specifically, Akita dogs are prone to the following health problems.

Hip dysplasia is a condition where the thighbone doesn’t fit the hip joint.

It causes the dog to walk abnormally and is painful.

Some dogs may not show any pain.

It is generally seen in aged dogs.

Elbow dysplasia occurs when the elbow bone doesn’t fit the joint or there are some extra cartilages around the joint area.

To check If your dog is suffering through this, you must get an X-ray done.

Arthritis is noticed in older dogs as the strength of the bones seems to reduce.

Having an overweight dog will put stress on his joints.

Make sure your dog gets enough exercise and good nutrition.

This will prevent your dog from having joint problems in the future.

Akita dogs are hairy so they are susceptible to skin diseases like these.

In a condition of sebaceous adenitis, the dog starts losing lumps of hair and the skin becomes dry and scaly.

Treatment of this can last for a long time.

Your dog is likely to get this disease between one to five years of age.

The best that you can do is use dog shampoos to keep the coat and skin of your dog clean.

This is also known as a uveodermatologic syndrome.

This condition affects the inside of the eye and the skin.

This may cause the upper eyelid to get inflamed and the skin to turn white.

This condition is serious for the eyes because it can lead to blindness.

Dogs may get sensitive to bright light and their eyes may turn red in color.

It is known as pemphigus for a group of diseases.

It causes ulcers to grow and the skin becomes crusty.

Direct contact with sunlight may worsen the skin problem so make sure you apply sunscreen before heading out.

This disease is hereditary and causes the dog to go blind.

Early symptoms such as night blindness and dilation of pupils are shown in ages 3-5.

This is incurable but it can be checked if such a gene is present.

Getting glaucoma is a medical emergency because if it is left untreated, it can lead to permanent blindness.

It is extremely painful and causes eyes to become watery, red and the cornea can become blue.

This is caused due to the aging of the dog.

An operation may solve the problem.

Do not give it all at once.

It should be fed twice a day.

Feeding one large meal may result in digestive problems.

Meat is the best source of protein for them.

Although dry food is recommended, including fresh food like meat, rice and vegetables will help your dog to get all the nutrients such as vitamins and minerals.

All dogs may have reactions after getting their first vaccine.

But Akita puppies have a different Immunological reaction which is severe and very specific.

It is genetic and can be only transferred by the parents of the dog.

Care must be taken while vaccinating an Akita because there are no clear symptoms of developing the immunological reaction.

However, general vaccinations should include DMP, Distemper, Parvovirus, and Rabies.

Grooming costs around $16 per grooming session.

Average money used for food will be 40$.

Medical expenses will depend on the number of times you have to take them to the vet and the severity of the problem.

You may expect to pay $200 per visit approximately.

Akita is aggressive and full of energy.

Do not leave young children alone with the dog.

They should always be supervised by an adult.

The early socialization of the puppies decides how friendly they will be around kids and other strangers.

They don’t like other dogs of the same sex.

They can get violent around other dogs.

They should be kept away from other dogs.

It is better that Akita is the only dog in your household.

It isn’t friendly and tries to establish dominance when kept with other dogs.

Akita is not a friendly kind of dog.

It is better to keep away other animals or pets when Akita is at home.

Akita has shown aggressive characteristics in many households so it’s better to fence your yard.

To prevent this, you can introduce them to early socialization which will make them more friendly and accepting towards other animals and strangers.

On a general note, Akita is charming and likes to be in a single dog family.

It is loyal to its owner and the best example for this is Hachiko.

They are easy to groom but cannot sustain hot weather temperatures.

They can act as a perfect guard dog for your house.

They act protective around their owner.

In Japanese culture, Akita dogs have a strong presence.

It is given as a “Get Well Soon” gift to someone who had just had a baby.

Tell us what breeds should we include in our next article.

If you haven’t watched Hachiko yet, go and watch right now!

Indian Spitz – The Puffball You Need For Your Home

ABOUT US
We look forward to support every dog parent with some useful and quality content to be better able to understand and take care of the unspoken animal’s problems.
Contact us: contactdogisworld@gmail.com
FOLLOW US

© Dog Is World by PortraitFlip