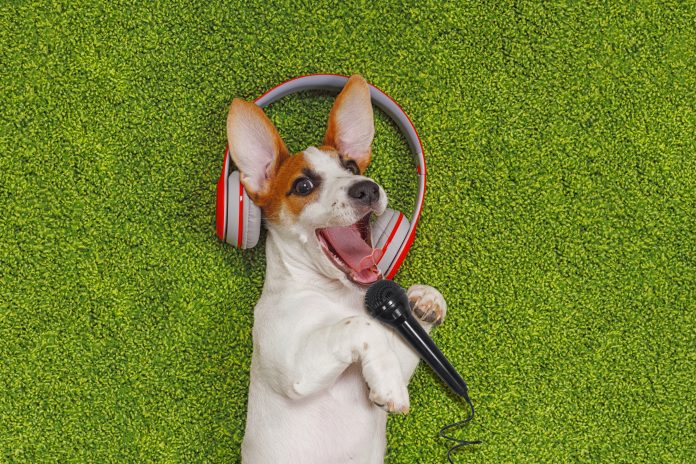 Isn’t music the antidote to a bad mood, loneliness or just a gloomy day? Music has the ability to soothe, to energize and to rejuvenate moods. It works like magic, right?

Is this the same for dogs? Have you ever wondered do dogs like music?

So, you’re sitting in your room, playing music, doing some work, and suddenly your dog starts howling. Don’t freak out, this is the way your dog responds to music it likes.

After all, doesn’t it feel marvelous to have music playing in the background and your dog is humming along to it? And it is just you and your furry friend enjoying each beat of the song, making memories. Indeed, wonderful.

It can be surprising but this isn’t new. Dogs have a long history of liking music and there have been so many researches conducted on this as well.

Dogs are one of the smartest animals on earth. But this differs from breed to breed as well. But they can hear music and they have favorite genres too!

Keep on reading to find out Do Dogs like Music? And more about it!

Signs That Your Dog is Hearing Music

Your dog will react differently to different types of music.

Dogs have this trait of associating sounds to situations. The same goes for music. Interestingly, this is how memories are made in their heads.

Sounds guide them, help them in predicting what will happen next. And as goes with dogs, you know they love to be ready for what’s next.

If you both having a good time and there’s music playing in the background your dog will get happy and excited every time that song plays on.

Dogs exhibit behavior like panting or jumping excitedly or even barking when they listen to that particular song.

Research says dogs react to the tunes in the music in a similar way that humans do. Dogs and heavy metal music are known enemies as this makes them anxious and frustrated. Dogs start to bark very loud when heavy metal music is played.

Dogs are big fans of classical music. It is known to make dogs peaceful and calm and often put them to sleep.

With classical music playing in the room, you’ll see that your dog is barking lesser and not as rambunctious. Dogs do not respond to normal human conversations or pop music.

Dogs are very alert and attentive in their daily surrounding but these songs do not make much of a difference. Your dog might perk its ears for a brief moment and then continue doing what they were doing.

There is a change in their body language when they are listening to music. Dogs will be alert, bark, howl, perk their ears up or pant excitedly.

They also appear less anxious, become quiet and stop what they are doing. If you see your dog doing any of these, it’s reacting to the music.

History of Dogs Listening to Music

As we all know, dogs are direct descendants of wolves. Dogs are, in fact, domesticated wolves. Over 150 centuries ago, there were two species on this planet who were independent of each other.

Wolves have an impressive sense of smell and hearing. Wolves can hear sounds from more than six miles away.

However, dogs do not have the same hearing abilities as the wolves but that is mostly because they don’t need it.

Hunting dogs have higher hearing abilities such as the Labrador, Dachshund and the English Setter than normal dogs.

Dogs have much better hearing than humans and are capable of hearing specific things. When they listen to music, they hear each instrument played in the song at its particular frequency.

This is exactly why they react to different types of music differently.

The Science Behind Dogs Listening To Music

The science part of this can be quite fascinating. Did you know dogs have a total number of eighteen muscles in their ears? That’s twelve more than the human ear muscles!

These muscles are adjusted according to the sound they are hearing. They also adjust their ears to the direction of the sound they are listening to. These features exist in dogs for a really long time and make them alert and agile.

Dogs are very well versed in associating sounds with moods and events. With the help of this, they can easily predict what is going to happen next. They can even derive the meaning of a situation from a song, once they’ve heard it a lot of times.

Can I Train My Dog To Listen To Music?

Dog training is extremely vital. It helps stimulate them mentally and also increases their intelligence and brain capacity further. Dogs who are well trained are smarter and sharper even with age. They are also alert and understand their environment better.

But the bigger benefit here is that is increases closeness and trust between you two, making a bond that is unbreakable.

If you want to train your dog to listen to, or baby steps, react to music; the first thing to do would be to introduce them to it. If you want to make your dog listen to the new song you have just discovered, playing it often can create positive associations while the music plays, the dog understands you’re having a good time.

Try swaying confidently and acting as if you are having such a good time listening to music. Well, you don’t have to act if it is your favorite song. But let your dog know that this is your jam.

Teach your dog to imitate you by dancing around him or smiling too much and playing with him. This way, your dog will react happily after seeing you happy.

With time, your dog will be able to link this music or song with these fond memories that you both when this music plays.

If you want to take it to the next level and want your dog to learn a command when a song play, grab some treats and give him a pat on the back if they follow it!

There are a few people who teach their dog to dance on songs with certain choreographies. But this could take a while, it is worth the effort though.

Start small by introducing your dog to music. Doing so in the puppy years will definitely be easier but that does not mean you cannot do this later. Dogs are capable of learning new, different things all their life.

If you want to succeed in this mission, you have to be consistent though. No off days. Ending these pieces of training with treats, hugs and some games of fetch can really as it will form positive memories. It will also strengthen the bond you two share.

Dogs tend to respond very poorly to negative treatment or punishments. They understand when you are happy with them and it is much better for both of you.

Understand that dogs love to be loved and they are mentally much better when they are treated and trained positively.

A study was conducted by the Scottish Society for the Prevention of Cruelty of Animals (SPCA) where the researchers from the University of Glasgow played songs from different genres of music.

This was done in a shelter home in Dumbarton, Scotland. These results show that dogs spent most of the time resting on the floor whilst the music was being played, despite the genre.

But some dogs had their own preferences too. Their reactions to the genres are were mixed and this brought to light the possibility that dogs can have different tastes in music.

The behavioral and psychological changes that were exhibited by dogs were very prominent when they were introduced to different variations in music.

Your dog will not like hard rock music. It is said that hard rock music makes dogs stressed and anxious. It is almost the same as their reaction to death metal.

Dogs like soft rock music. It is calm, soothing and will not cause any harm to the ears of dogs. Soft rock music induces feelings of ease and lowers their heart rate by 40-60 beats per min and also makes them happy.

Chances are your dog will LOVE Reggae. It is a given. Whilst curating a playlist for your dog, make sure it is ninety percent Reggae. No settlements.

In the study conducted by the SPCA, when they played Reggae music, dogs were more relaxed and chipper.

They were lying down on the ground with their eyes which was a telltale sign that these pooches loved this music.

So, you know what that means right? Your dog is a Bob Marley fan. This is literally the coolest thing ever!

Dogs and Heavy Metal are two things that do not get along at all. Studies indicate that listening to heavy metal makes dogs shaky and extremely anxious.

This also makes them bark very loudly, disturbing others. This also means that if you are a Black Sabbath or Metallica fan you will have to jam to your loud and obnoxious music through earphones only.

Pop music is like a white noise machine for dogs. They are completely unaffected by it. It isn’t revolting nor calming; hence they do not react to this genre of music.

Pop music could be playing in the background and your dog will go on about his business. It doesn’t stress them out but it doesn’t induce any peace either.

Experts suggest that dogs identify pop music with human conversations and hence remain unbothered with it. Also, this genre of music is more commonly played and hence it does not alarm or alert dogs.

Dogs love Motown music. Motown music has a strong and steady four drum beat. It has a lot of strings and horns sounds and complex chord changed with sophisticated melodies.

They love this music because it is similar to reggae. Dogs also dance to Motown music sometimes!

This is hands down the all-time favorite music genre of dogs. Remember the movie, Beethoven? The Saint Bernard in the movie howls along to the music that plays on the television. Adorable!

Classical music helps in reducing stress and anxiety levels, improve their mood, reduce blood pressure. There is a significant positive change in their behavior.

The effect of classical music doesn’t last too long. Once the song is over, your dog might bark and howl as a sign that you must play the music again.

It also regulates their reactions. The melodies and rhythm of the classical music that dogs are fond of.

So, you can say that dogs are old-school that way.

Thus, to answer your question, do dogs like music?

Yes! Dogs like to listen to music. They like to howl or softly growl to their favorite tunes.

You can introduce your dog to music in a lot of different ways. But make sure you the music is calming and soothing. They get very anxious when introduced to music that is loud and fast.

Fret not while exposing your dog to Bob Marley, Toots and the Maytals or Augustus Pablo. Your dog will certainly be into that. You can find few playlists for dogs on Spotify too.

Music can really bring you and your dog together. Dogs use sounds and associate them with memories.

So, if you had a good time, played a few games of fetch or treated your dog whilst listening to music, your dog will remember the song. Dogs are very intelligent and have relatively higher hearing capabilities.