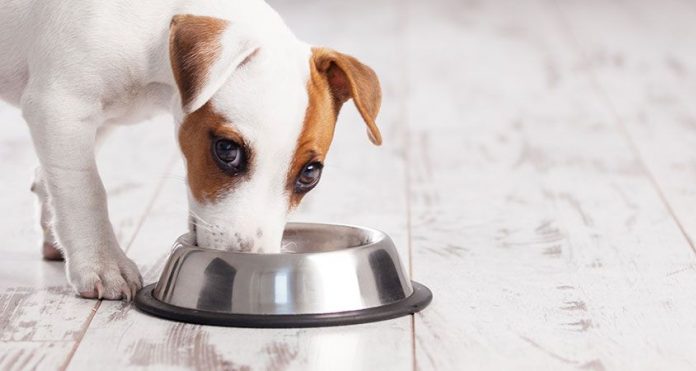 Every newborn, be it human babies or puppies require additional care and attention during their initial stages. Hence we have a come up with puppy feeding guideline in this blog.

Most of us do not have sufficient knowledge on how and what to feed puppies and we want to make sure that we’re feeding them correctly, in order to avoid any repercussions.

The upbringing of a puppy includes many aspects such as the right food, quantity, playing and training for them to grow into healthy adults.

Apart from that, every puppy is different in its own way and there is no generalized scheme to what or how to feed puppies, consulting a breeder or a veterinarian is a viable option in order to understand and educate yourself about the stream of puppy feeding.

I hope this puppy feeding guide provides you enough knowledge, in order to make infanthood of your puppy memorable.

Puppies should not be allowed to be separated from their mothers, during the first 6 – 8 weeks of their life, puppies are not capable of generating their own antibodies.

The mother’s first milk which is rich in colostrum is highly beneficial for the puppy to absorb all the necessary antibodies to armor them against deadly microbes.

Not feeding the puppy with the first milk of its mother would make the puppy vulnerable to health downfalls and unwanted diseases when he grows up.

Let me take you through this puppy feeding guide, in order to get a better understanding.

When a puppy is at its growing stage, the major aspect of feeding boils down to ‘nutrition’.

Appropriate nutrition is what will ignite healthy growth and hence, they should be fed with puppy food.

Feeding them adult food will keep them away from the required nutrition and hinder the appropriate growth required for the puppy to mature.

Feeding them 4 times during a day would work fine.

Larger breeds are recommended to be fed dry food when they’re 9 – 10 weeks of age and smaller breeds should be fed at around 12 – 13 weeks of age.

During this age mostly, the puppies begin to mature and lose their potbelly and pudginess.

It’s better to be on the side of puppy food quite longer than to regret later about not staying long enough.

Prior to 6 – 12 months of age you can switch from puppy food to adult maintenance food.

Twice a day is a sufficient frequency to maintain good health.

After 1 year of age, all dogs are suggested to be fed with adult maintenance food irrespective of their breeds or sizes.

The frequency of feeding the food depends on the activity level and training the dog is undergoing.

Even though, after a year they shouldn’t be fed more than 2 – 3 times a day.

In the world where commercial puppy foods have always managed to find a space in the kitchen, there are people who want to save up a bit on the expenses and also educate themselves in the art of preparing puppy food that satisfies the demand.

It can be a tricky business when it comes to preparing a suitable puppy food at home, as we must take into consideration that puppies need balanced nutrition to flourish and thrive as much as human infants do.

You can always consult a veterinarian or a breeder in order to know the specifics on what to feed and what to avoid, but a basic outline for a balanced diet is:

Preparing homemade food requires a strong commitment from your side, which would require keeping detailed track on what you’re choosing in order to make a perfect blend of a balanced meal.

Responsible dog owners set time aside on a daily or weekly basis to prepare portions of homemade food for their puppies, and you should go for the option of homemade food only if you can ensure commitment towards.

For a majority of us, it is oddly satisfying to watch the puppy consuming her meal.

It’s hard to decipher what is so satisfying in watching the puppy eat, but we often tend to overfeed them out of adoration.

We must be careful about the quantity and amounts while feeding the puppies.

The quantity of food varies from dog to dog based on their size, metabolism, and breed.

If you’re into treat based training for your pup, you must adjust the number of meals accordingly.

There can be instances where your pup might sniff the food and abandon it, chances are that you’ve overfed him during one of the meals.

We often find ourselves in dilemma about whether to feed the puppy dry food or moistened food, because of the simple notion of underdeveloped puppy teeth.

It is always safer to feed the puppies with moistened food during the first 6 – 12 weeks, as food which is more inclined towards the liquid form is easier to digest.

Dry food can be incorporated on a regular basis after 12 – 13 weeks when the puppies are usually during their mouthing period.

Dry and solid food would fill them up and satisfy their mouthiness at the same time.

Types of food available in the market:

Beware of the ‘all meat’ signs, as absolute growth requires balanced nutrition and meat won’t do it alone.

Hard Kibble can be served directly the way it is in the bag without adding anything.

In the first few weeks after their birth, they receive all the nourishment from their mothers.

They might tend to mess it up or play with it but eventually, they’ll understand what it is for.

It is recommended to training them to eat on their own rather than spoon-feeding, to ensure over-dependency.

Whatever the diet is, overemphasis on protein, fat, and calories should be brought down as they’re prone to orthopedic issues, such as hip dysplasia.

Have you ever wondered what goes through a puppy’s mind when he’s brought to his new home?

Most of them are nervous on their first days with droopy eyes, eyes that’s saying: where have I come and what are they going to do to me?

It takes time for them and patience for the owners to get them used to their new surroundings and make them accept the fact she is being taken care of and there is no harm.

As a part of being the owner, one must know the various stages of development a puppy goes through and what to expect out of those changes.

This stage exists until two weeks after the puppy is born.

The puppies come out to the world with pre-equipped senses of touch and taste and the puppy is influenced to the highest degree from his mother and littermates.

The way the puppy’s characteristics traits are going to depend on its mother and the number of social skills developed due to the playing sessions with his littermates.

The transitional stage is the time period between two to four weeks.

This is the period where they are continued to be influenced by their mother and littermates.

They learn basic activities like walking, wagging its tail and barking.

Playful sessions with his littermates infest canine discipline in him, and the social skills developed during this stage is what determines his social skills when he becomes an adult.

This is the most prominent and crucial stage for the puppy, which drags between three to twelve weeks of his age.

It is during this stage the puppy gets used to other dogs as well as other people surrounding her.

She learns various physical coordination and bites control with her littermates.

Quality sessions with her littermates is a deciding factor where she learns how to be a dog.

During this stage, she needs positive human interaction, in order to develop curiosity and get newer experiences about life.

By the time of seven to nine weeks, the puppy is well versed with its physical coordination and is absolutely ready to be housetrained.

Typically dogs are used to being in packs, where submission or dominance is decided.

Packs usually have a leader, so when the puppy is brought at home he must learn about his leader, because if he tends to be the dominant one – he would become aggressive with time.

Teething and chewing begin during this stage.

Since puppies are introduced to new objects and environments, they are fearful and need positive reinforcement during this stage.

The ranking stage exists between 3 – 6 months of age.

It is during this stage puppies would challenge other human beings in order to show dominance, in order to become the leader of the ‘pack’, basically family members.

The teenage puppy would also show some sexual behaviors, if not spayed or neutered.

It is majorly seen between 7 – 9 months of age.

Having puppies at your household would make you lose track of your days.

Puppies require more attention and dedication than adult dogs and when it’s about their feeding and nutrition it requires greater planning and systematic execution to ensure the puppy grows into the adult dog it is supposed to be.

Most people when they have a puppy often ask ‘How should I feed my puppy?’ and I’ve got you covered with everything you need to know about puppy feeding with this puppy feeding guide.

I hope it helps you frame the best plan for a healthy upbringing.

I hope you’ve found the answers to what you were looking for.

Kindly, share it with your friends who are looking for the same.

Kindly, comment about how you tackled the puppy phase of your dog.

We love to hear from you, thank you!

How To Bathe A Dog?

How To Stop A Dog From Chewing Everything? Reasons, Do’s &...

ABOUT US
We look forward to support every dog parent with some useful and quality content to be better able to understand and take care of the unspoken animal’s problems.
Contact us: portraitflip@gmail.com
FOLLOW US
© Dog Is World by PortraitFlip
MORE STORIES