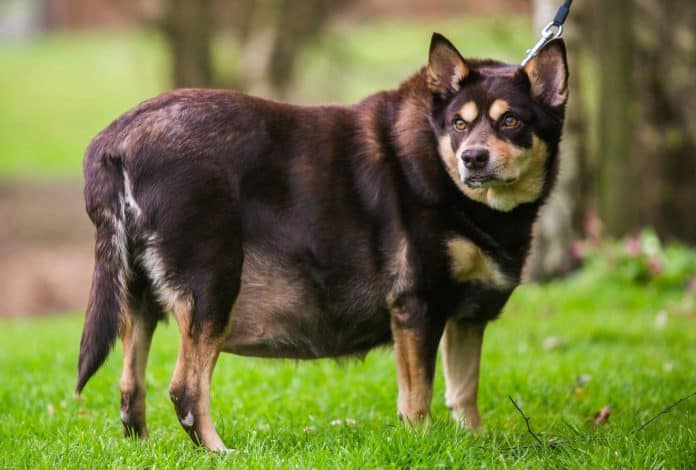 Obesity is now not only a concern of humans but it seems in the recent years that it has also caught up with pets.

Walking into a park or a street where the pets and owners routine, you may find a lot of fat dogs and you may also notice that these numbers are growing day by day.

These overweight dogs that you see are actually suffering through obesity which is the consequence of their lack of appropriate amount of exercise in addition to eating in excess.

Though not all dogs lack exercise or eat excessively but are still quick in gaining weight due to their body’s natural tendency to retain fat.

We will talk about these fat dog breed which is prone to obesity ahead in the article.

Obesity in pets isn’t something taken seriously by the owners as they just see that the dog has gotten lazy but the real point of concern is what happens inside the dog’s body.

This can shorten your dog’s life span.

Most of the symptoms of obesity aren’t sudden and can be noticed in their gradually growing stages.

These are the overweight dog symptoms –

FACT-ILICIOUS: According to the Association for Pet Obesity Prevention, 53% of adult dogs and 55% of cats in the US are obese or overweight.”

“22% of dog owners said their pet’s weight was normal when it was actually overweight or obese.”

There are 5 kinds of causes that can lead to obesity.

A. Depending On The Dog’s Environment:

We the owners get too sweet with our pets and forget that sometimes saying no to it can save it from a lot of many troubles.

This can decrease its stamina over time and make it lethargic.

This less expenditure and a good intake of energy can lead to an undue gain in the weight of the dog.

This seems to give away to more weight gain and worsen the situation.

B. Depending On The Physiology Of The Dog:

This generally happens after the age of 5 and so you should make changes in its diet and exercise routine in accordance with the consult of a veterinarian.

There are many breeds that are prone to obesity and we will talk about them further in this article.

C. Depending On Any Past Surgery Or Medications:

Medications for anticonvulsant can lead to an increase in hunger of the dog.

Medications like glucocorticoids can abnormal fat depositions and weight gain.

D. Depending On Past Or Present Diseases:

Hypothyroidism in dogs, for example, is a disease in which the immune system starts attacking the thyroid gland and this causes an imbalance of hormones leading to undue weight gain.

This can cause weight gain in dogs.

To many, obesity doesn’t seem like a big issue and hearing things like ‘shortens the lifespan’ or ‘puts pressure on the heart’ don’t sound alarming but if you love your pet and want it to stay healthy and active throughout its time with you, then start taking obesity as a serious concern as it can do a lot more damage than you think.

A. Weakening Of Joints, Bones, And Ligaments:

An Overweight dog will have an extra strain on their bones and joints while walking or doing any exercise.

This can over time cause weakening of the ligaments due to the pressure on the joints and also cause pain in the knees, hips or shoulders.

This can make the bones brittle with time and more prone to hip dysplasia and ligament tears.

An obese dog has more tissue than required and so the body needs to secrete more insulin also so as to counter the increased blood glucose level.

When the need for insulin exceeds the ability of the body to produce insulin, diabetes mellitus develops.

It can put so much pressure on the pancreatic cells to produce insulin that the cells can burn out resulting again in diabetes.

Obesity can lead to hypertension which is due to increased blood pressure.

Also, it puts a lot of strain on the heart as the heart has to work harder to make the blood reach the extra tissues.

This can be strenuous for the heart and this for a long term can lead to congestive heart failure.

In obese dogs, there is so much amount of fat that there is no space for the lungs to expand and over that due to the presence of extra tissues, the lungs have to work harder to provide oxygen to these tissues making the situation worse.

The dogs who over obesity have respiratory disorders can suffer badly.

Naturally, when it gets difficult for the heart and lungs to function properly, the dog gets lethargic and lazy.

The dog can be found breathing heavily after a normal walk outdoors and can no longer cover good numbers in lengths as it used to.

Obesity means an increase in the body fat which counts well in insulating the dog from cold but when it comes to summers, it is completely the opposite and can make it hard for the dog’s body to cool down under hot weather conditions.

G. Decrease In The Functioning Of The Liver:

The function of a liver is to store fat but in the case of an overweight dog, the liver has fat stored in excess which can lead to a condition called hepatic lipidosis which can lower the functioning of the liver.

Inducing anesthesia in an obese dog has the risk factor of getting a cardiac arrest.

It lowers the blood pressure so much that it gets difficult for the blood to reach the extra tissues.

Anesthesia is absorbed by fat present in the body and so an obese dog can take longer to come out of its effects also due to the fact that the liver, which is responsible for breaking down the effects of anesthesia is not effectively functional.

Fat dogs have difficulty in giving birth and may require a c-section to be performed by the veterinarian as assistance.

This condition of difficulty in giving birth is called dystocia.

Indigestion is common among overweight dogs and can lead to constipation and intestinal problems, stomach ulcers and if this goes on for long, it can also cause intestinal cancer.

Any dog that has been through or is going through obesity is prone to develop cancer and mostly that of the urinary bladder.

Obesity also lowers the immunity of the dog and leaves it vulnerable to many diseases or it can lead a common disease into becoming a major one.

As a dog becomes obese, its demands in various aspects increase.

Its need for food to satisfy its undue hunger increases and with that increases the need to consult a vet.

To remedy it from obesity, you and your vet have to keep a track of the dog’s activity and diet and to consult a vet is a costly affair.

Over that, it takes months for a dog to lean down which means a lot of visits to the vet.

Over that, it becomes a continuous run behind your dog to make it lean again.

Osteoarthritis is a common disease in overweight dogs as it is caused due long term excessive pressure on the joints which deteriorates the ligaments and so causes pain and can make a dog reluctant to walk.

This can be severe obesity in a dog.

An obese dog is hard to groom as its skin gets thick and coat gets hard.

Not getting rightly groomed leads to bacterial growth and infection.

Hard skin coat when groomed hard can get scratches and cuts which can develop infections.

There are many skin folds on an obese dog that can accumulate oil and sweat, becoming prone to infections.

FACT-ILICIOUS: “According to the Purina Lifespan Study, obesity takes almost two years off a dog’s life.”

“The five US states that rank highest for obese dogs are: Minnesota, Nebraska, Michigan, Idaho, and Nevada.”.

Consult your dog’s vet for a proper diagnosis if you feel that your dog has radically gained weight or is not showing enthusiasm when a ball is thrown at him or if its hunger has increased in an alarming manner and needs food anytime throughout the day.

These are the basic signs which should make you go and get your dog’s BCS done.

BSC is the body condition score system which is the easiest and an effective way to determine if your dog falls in the category of optimum, overweight or obese.

The vet will assess your dog’s body by palpating its ribs, lumbar area, tail, and head and then comparing the measurements with the breed standard chart.

Excess body fat between 10 -15 percent is considered obese and in a BCS system scale of 9, any number greater than 7 is assigned the category of obese.

Dog obesity chart is a generalized format used to determine in what category the dog fits, which is done after taking all the needed measurements of the dog and comparing them to the different categories given in the chart.

According to the chart –

There not much muscle mass and no observable body fat.

These dogs look emaciated and starved.

These dogs have an obvious waist when viewed from above and an abdominal tuck.

Thin, lean or skinny in appearance.

Muscular and ideal in shape.

Fat deposits on the base of the tail, hips, and chest. Counted as overweight.

The abdomen sags prominently and no waste can be viewed from above.

The chest and abdomen appear swollen.

This falls under the category of obese.

FACT-ILICIOUS: “Several studies suggest that pet obesity could be linked to human obesity. If an owner overeats, they are likely to provide the same level of food to their pet.”

Try to play challenging games like fetch or Frisbee as it can intrigue the dog to go outside and also playing can speed up the pace for losing that extra weight.

You can go for commercial dog foods like high protein low carb dog food of any brand that suits your pooch, which can be found in many stores.

Check out the yellow boxes to know some dog obesity facts that you might come as a shock to you.

Ever had experience in curing obesity of a dog?

What was the experience like for you and your dog?

Tell us about it and help us fill the missing voids on dog obesity in the comment section below.

Dogs In Heat – Behavior, Estrus Cycle, Precautions, Tips and a...