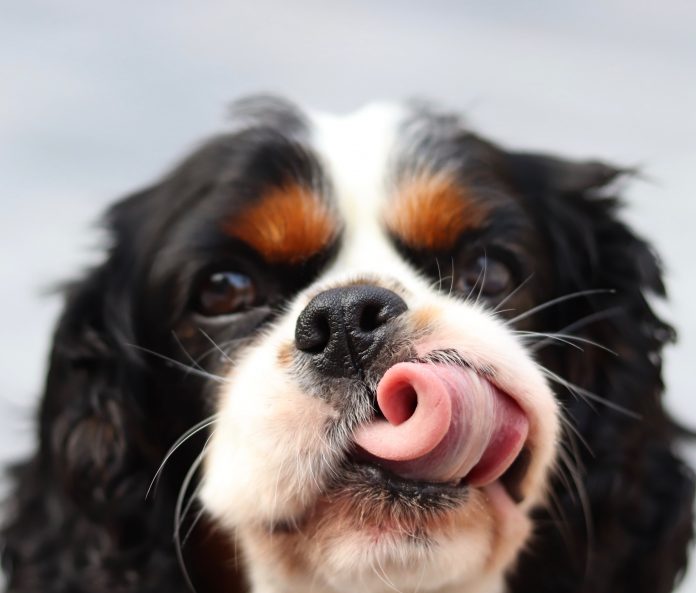 This is one of the common questions among dog parents that why do dogs have whiskers?

Dogs have a set of stiff hairs emerging from the sides of their muzzles generally called as “whiskers.”

To be accurate, “whiskers are specialized hairs that are tied to sensory nerves around a dog’s face.”

Many people don’t realize that the coarse, long whiskers on a dog’s face actually serve an important purpose.

In fact, some pet owners try and snip off dog whiskers because they think they look untidy.

Different from ordinary hair, the hair follicle at the base of whiskers is equipped with nerves that send sensory messages to a dog’s brain.

Dog whiskers sensitive to almost everything around them. Change in airflow, interaction with objects, and moisture everything has an effect on dog nerves which lets them understand the structure of their surroundings, even in the dark.

Dog with whiskers come into contact with something, the nerves send signals to the dog’s brain, allowing the dog to evaluate what’s close by.

This is a particularly important function for a couple of reasons.

Firstly, dogs’ vision is not as strong a sense as vision is in humans—their sense of smell is much more adroit—especially when it comes to close-up vision.

Canine vision is not so wonderful but dogs are known for their great senses of smell and hearing.

Whiskers help them “see” things that lie right under their noses by constantly sending information to the canine brain.

Besides the tactical advantages of whiskers, these special facial hairs can also relay messages about how a dog is feeling.

When a dog is scared he will flare and point his whiskers in the forward direction.

Despite the apparent advantages of having whiskers, some stubborn pet owners — particularly those who “show” their dogs — opt to pluck, trim or surgically remove these vital sensory tools.

Dog’s whiskers are the first to develop and they help your dog safely find their way around extremely early on.

Whiskers can be used in dog communication.

A threatened dog may flare its whiskers and point them forward as a show of aggression.

When a dog rests, the whiskers take a break.

But when a dog is active, so are they!

A happy or curious dog tends to elevate the whiskers above his eyes giving him that cute, wide-eyed look we love.

What Do Whiskers Do For Dogs?

At the bottom of every vibrissa, there is a dense concentration of touch-sensitive neurons, which are designed such that on every slightest touch there is a high impact on these neurons and there is a neural response.

What is the purpose of dog whiskers besides helping dogs feel things around them?

Well, that is the primary purpose.

“What are whiskers for on dog and how do whiskers work” involves how the dog is feeling, and how they show it.

“Dogs also appear to use them to convey their state of mind.”

When dogs are alert and engaged with their surroundings, their whiskers tend to be upright, while the whiskers on a reserved or timid dog often will be held close to the face.”

Some breeds of dogs have also been known to use their whiskers in the same way that many smaller mammals do, to determine whether they can fit through small spaces.

Highly tactful to subtle changes in air currents, canine whiskers serve as receptors for important information about the size, shape, and speed of nearby objects.

Dogs with reduced vision depend even more on the sensations from their vibrissae to help avoid bumping into things.

Vibrissae are part of the variety of other animals including cats, rats, bears, and seals, which suggests that they must serve a useful function.

A large portion of the dog’s brain is responsible for processing data from touch sensors.

Whiskers are very reliable touch sensors so almost 40% of the brain’s sensory area aligns with body parts that have whiskers.

It also seems to be involved in the location of objects, and perhaps in the recognition of the objects themselves.

Since the dog’s eyes can’t really focus on close objects, and his muzzle blocks his line of sight when he is looking at things close to his mouth, the information from the downward and forward pointed vibrissae appears to help him locate, identify, and pick up small objects with his mouth.

Each individual dogs’ whisker can be traced back to a specific spot in the brain which means that whiskers occupy valuable neurological real estate in a dog’s body.

Do Dogs Need Their Whiskers?

Do dogs need whiskers the same way as cats do?

Yes, they are similar as found on rats, cats and bears.

Whiskers help a dog interact with the surrounding around him/her.

This helps keep the dog from running into objects and walls.

Do All Dogs Have Whiskers?

Are there no dogs without whiskers?

No, all dog breeds have whiskers.

In fact, most mammals excluding humans have whiskers on them.

Well, humans also have whiskers, but they aren’t the same kind that other mammals have.

Can You Cut Dog Whiskers?

Dogs of many different breeds routinely have their vibrissae cut in preparation for the show ring so to attain “a cleaner” outline of the jaw.

Unfortunately, amputating vibrissae is both uncomfortable and stressful for dogs.

Dog whiskers cut should not be considered as a part of your pets’ grooming session.

Do Dog Whiskers Grow Back?

You may be wondering, do dog whiskers fall out?

It takes only a couple of days for whiskers to grow back.

In the same way that a dog molts hair, they lose whiskers.

However, if you notice that your dog’s whiskers falling out are accompanied by symptoms such as loss of appetite or any change in behavior, you should consult your veterinarian as soon as possible.

Make sure the groomer knows not to cut whiskers, you should also never pluck a dog’s whiskers as they have a lot of nerve endings at the base, which will make it painful.

So your dog badly wants to say that please don’t cut my whiskers, but can’t!

What about under his chin?

Have you ever noticed the sporadic long and prickly whiskers there?

These are known as mystacial whiskers as they appear where a mustache would be.

However, dogs also have those growing on the top of the eyes (superciliary), by the cheeks (genal), and under the chin.

The whiskers under the chin are known as the interramal tuft, and typically a couple of these hairs sprout from a little spot of dark skin.

Dogs have blind spots under their chins.

They also turn helpful to dogs who have a passion for digging tunnels or going on sniffing adventures with their noses close to the ground.

All dogs have a little lump right in the middle of their chin where the whiskers come out.

Moles are common among dogs, especially on dogs with darker pigment in their skin.

They can appear anywhere on the body, but they differ from skin tags in structure and texture. Skin tags tend to be small and floppy, moles are flatter and harder instead.

Exposure to the sun can make your dog highly prone to moles.

They are slow-growing and are usually benign.

The infection could result from tissue irritation and bacteria introduced by the trapped hair.

Dogs, in particular, are prone to hair follicle problems and infections because they have a relatively thick hair coat covering most of the body.

You might be wondering how to remove ingrown whiskers?

Here’s how you can minimize it.

You can’t prevent ingrown hair completely, but you can help minimize your dog’s risk of suffering from a significant infection due to ingrown hair.

Brush your dog daily and take him to the groomer on a regular basis.

Acne is also another fairly common problem that can be confused with ingrown hair in dogs.

This inflammatory skin condition appears on the muzzle, lips, and chins in puppies.

Your veterinarian will help you distinguish if your pet is suffering from a grooming problem or acne.

What Are Dog Whiskers For?

They are sensitive to the vibrations in air currents.

When the air moves, the whiskers vibrate and help dogs understand the presence of nearby objects, as well as the physical attributes of these objects like the size and the shape of these objects, and keep dogs from colliding into them.

The whiskers located above a dog’s eyes to protect the eyes, much like your eyelashes protect your eyes.

Because whiskers vibrate when there is an object nearby, whiskers help him avoid approaching objects that might hurt his face and eyes.

There are some scientists who believe this behavior indicates that whiskers play some part in a canine’s defense strategy during combative situations with predators and other dogs.

Whiskers function much as antennae do in insects.

It helps dogs to get a sense of their surroundings, particularly in the dark.

These are especially helpful to dogs who have vision impairment.

When you gently touch a dog’s whiskers, they are really delicate and it’s been said that they’re as sensitive to touch as human fingertips!

The dog’s eye on the same side of the whiskers you’ve touched will blink reflexively, that is why if you’ve ever touched your dog’s whiskers they may blink or flinch in response.

Whiskers are thicker than ordinary hair, and their roots are set three times deeper.

The reason they vibrate and are so sensitive to touch is that whiskers are rooted in hair follicles that are filled with blood vessels and nerves.

They are strategically located above the eyes, on the chin, and above the upper lip.

The exact pattern and position of whiskers vary with breed.

What do you think about the blog?

Write your comments below.

20 Fluffy Dog Breeds That Will Melt Your Heart!